Number one on the list, is to have all fees waived for Indigenous communities to host events in public spaces 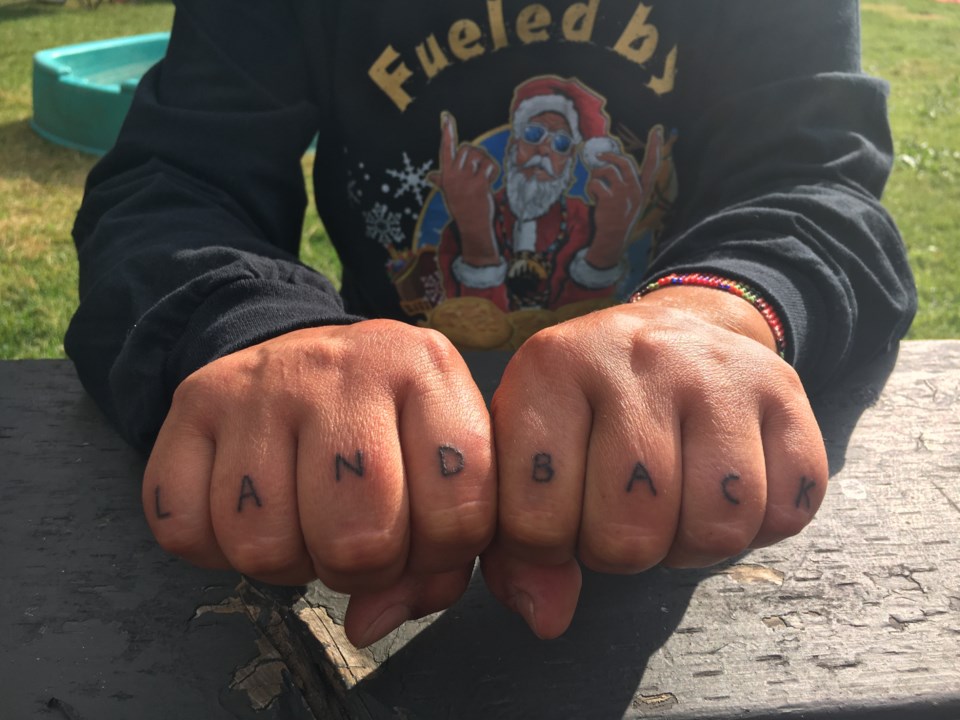 The words “Land Back” tattooed across the knuckles of one of the organizers. Phi Doan/ Kitchener Today

Organizers behind the Indigenous Land Back Camp in Victoria Park have presented a list of their demands in a new petition.

The occupation camp has been set up since June 20, and have requested to speak with the mayors of Waterloo and Kitchener a number of times.

After their first initial meeting, communication between the camp and the mayors has been slow, outside ongoing email exchanges with other city staff, like Parks and Facilities.

Following the huge success of their Gofundme, the organizers wanted to keep the momentum going. The petition was the camp’s way of making their demands clear, and to keep pressure on the cities.

Their demands goes as follows:

“One thing we always found was; there’s always so many fees, and red tape and permits that we have to have just for our community to come together,” said co-organizer Shawn Johnston of the Anishinaabe First Nations, originally from Treaty Three Territory. They said many other small organization have given up on holding events all together because of the fees. Johnston says local community members trying to raise the funds necessary are often short-lived.

“It will be a requirement of the city to never asks us for all the paperwork,” said Co-organizer Amy Smoke of the Mohawk Nation Turtle Clan from the Six Nation of the Grand River. “The permits in Waterloo Park alone, we had to get so many permits; they do the locates; they have to have they tent sizes. It doesn’t change much year-to-year, and to have to go through that every single year.”

During their first meeting with the mayors, Kitchener Mayor Berry Vrbanovic said he would commit himself to taking away the fees.

According to Smoke, they hav a community of around 20,000 to 30,000 First Nations, Metis and Inuit in Waterloo Region, but do not have a permanent physical space to hold their meetings and ceremonies at.

Regarding their second demand, Johnston hopes the cities will follow Guelph’s example, and that one day they hope to return to the campsite location a year later to find a dedicated sacred fire space for Indigenous gatherings. Smoke goes a step further, wanting to see a physical groundbreaking ceremony. The land would be in addition to seeing an urban centre created for the Indigenous communtiy.

The rest of their demands would see the cities step up their reconciliation efforts by creating paid positions in all government offices for Indigenous people. It would ensure that their voices are heard during any decisions or projects the cities have. The paid Indigenous Advisory Committee would be working with the cities to make sure they address issues facing the Indigenous community, and make progress in realizing the Truth and Reconciliation Commission’s long list of recommendations.

Smoke says the cities’ slow response on these issues—as well as Canada at large—is frustrating. While the group does not want the camp to still be set up year from now, they will continue to occupy Victoria Park until they see their demands met.