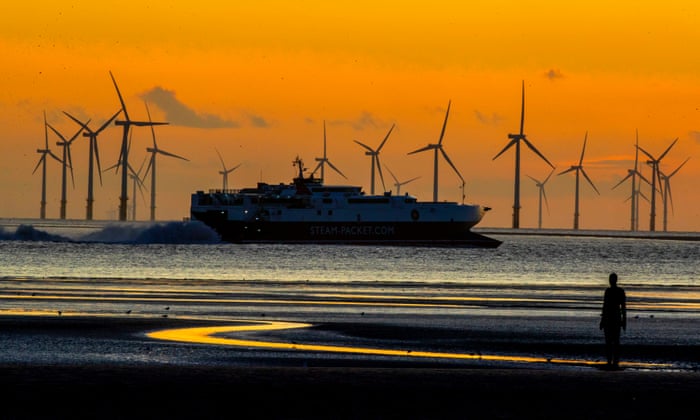 The new windfarms include a $3.9bn array off the Netherlands and a $3.8bn project in the Firth of Forth, Scotland. Photograph: Peter Byrne/PA

Global offshore wind investment more than quadrupled in the first half of the year even as the coronavirus pandemic triggered an unprecedented economic shock.

A report has found that investors gave the greenlight to 28 new offshore windfarms worth a total of $35bn (£28bn) this year, four times more than in the first half of 2019 and well above the total for last year as a whole.

The biggest half-year tally for offshore wind investment more than made up for a slowdown in investment for onshore wind and solar farm projects after the outbreak of Covid-19, according to the report by Bloomberg NEF (BNEF).

Albert Cheung, BNEF’s head of analysis, said: “We expected to see Covid-19 affecting renewable energy investment in the first half, via delays in the financing process and to some auction programmes. There are signs of that in both solar and onshore wind, but the overall global figure has proved amazingly resilient – thanks to offshore wind.”

The sea-based windfarms include some of the biggest investments in offshore wind ever made. The Hollandse Kust Zuid array off the coast of the Netherlands will cost the Swedish energy giant Vattenfall $3.9bn, and SSE’s Seagreen project in Scotland’s Firth of Forth is valued at $3.8bn.

The number of offshore wind projects to receive a greenlight in China climbed to 17 in the first half of the year, led by the Guangdong Yudean Group’s $1.8bn plans to build the Yangjiang Yangxi Shapaat wind power project.

The growth in offshore wind powered a 5% jump in total renewable energy investment to $132.4bn despite a slump for onshore wind and solar power projects. Onshore wind investment for the first half of the year fell by a fifth to $37.5bn, while solar investment slipped 12% to $54.7bn.

China remained the world’s biggest market for renewable energy, with total investment of $41.6bn in the first half of the year, up more than 40% from the same period last year thanks to its offshore wind boom.

Renewable energy investment slipped by 30% in the US to $17.8bn while India and Brazil recorded investments which were about 50% and 25% lower respectively at $2.7bn and $2.5bn.

Renewable energy is expected to be the most resilient area of the energy industry this year after the International Energy Agency warned that investment in global energy would fall by $400bn, the biggest slump in the industry’s history.

Angus McCrone, the chief editor of BNEF, said that a clearer picture of the impact of Covid-19 on green energy investment will come with the full-year 2020 figures.

“Renewables have been helped by vastly improved competitiveness and by investor appetite for assets offering secure cash flows. However, project developers face the challenge that key people, whether at the permitting, financing or construction stages, can’t meet face-to-face. And buyers of small-scale solar systems are sensitive to changes in consumer confidence.”