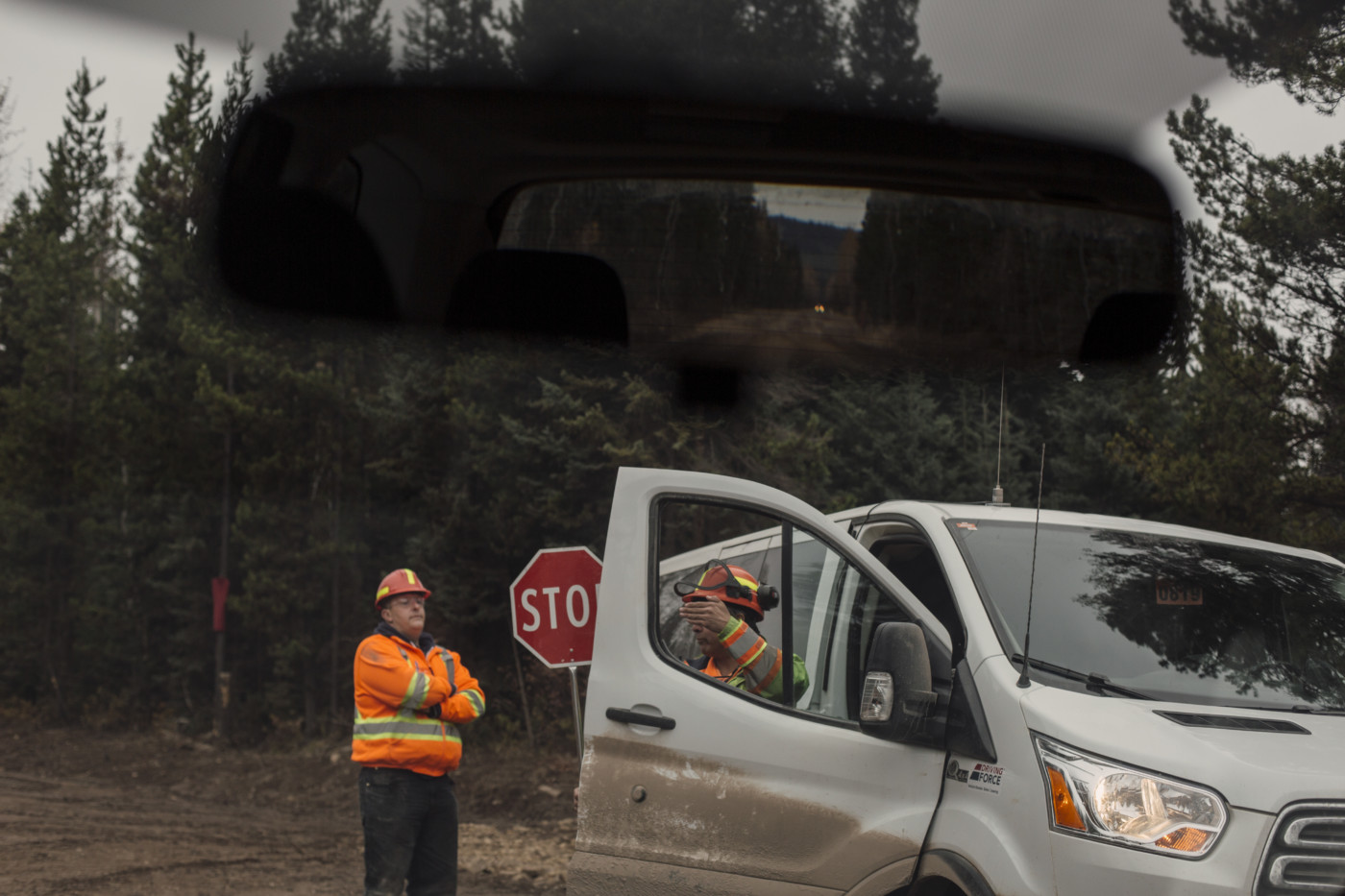 Construction workers monitor a section of narrow road built for the Coastal GasLink pipeline near Houtson, B.C. A red dress, signifying Missing and Murdered Indigenous Women and Girls, hangs from a tree in the background. Photo: Amber Bracken / The Narwhal

Coastal GasLink has been forced to stop pipeline construction near protected wetlands after an inspection by the B.C. Environmental Assessment Office found the company cleared areas without completing the required surveying and planning.

Coastal GasLink was issued two non-compliance orders in June and now has to complete the surveys before the project can proceed in the affected areas.

The 670-kilometre pipeline is planned to transport fracked gas from northeast B.C. to Kitimat, for shipment to markets in Asia.

Wet’suwet’en Hereditary Chiefs served Coastal GasLink with an eviction notice on Jan. 4, starting a chain of events that led to RCMP enforcing a court-ordered injunction to arrest more than 80 protesters in February, including Elders, Chiefs and matriarchs. On June 5, charges against 22 Wet’suwet’en land defenders and supporters were dropped and many others were never charged. 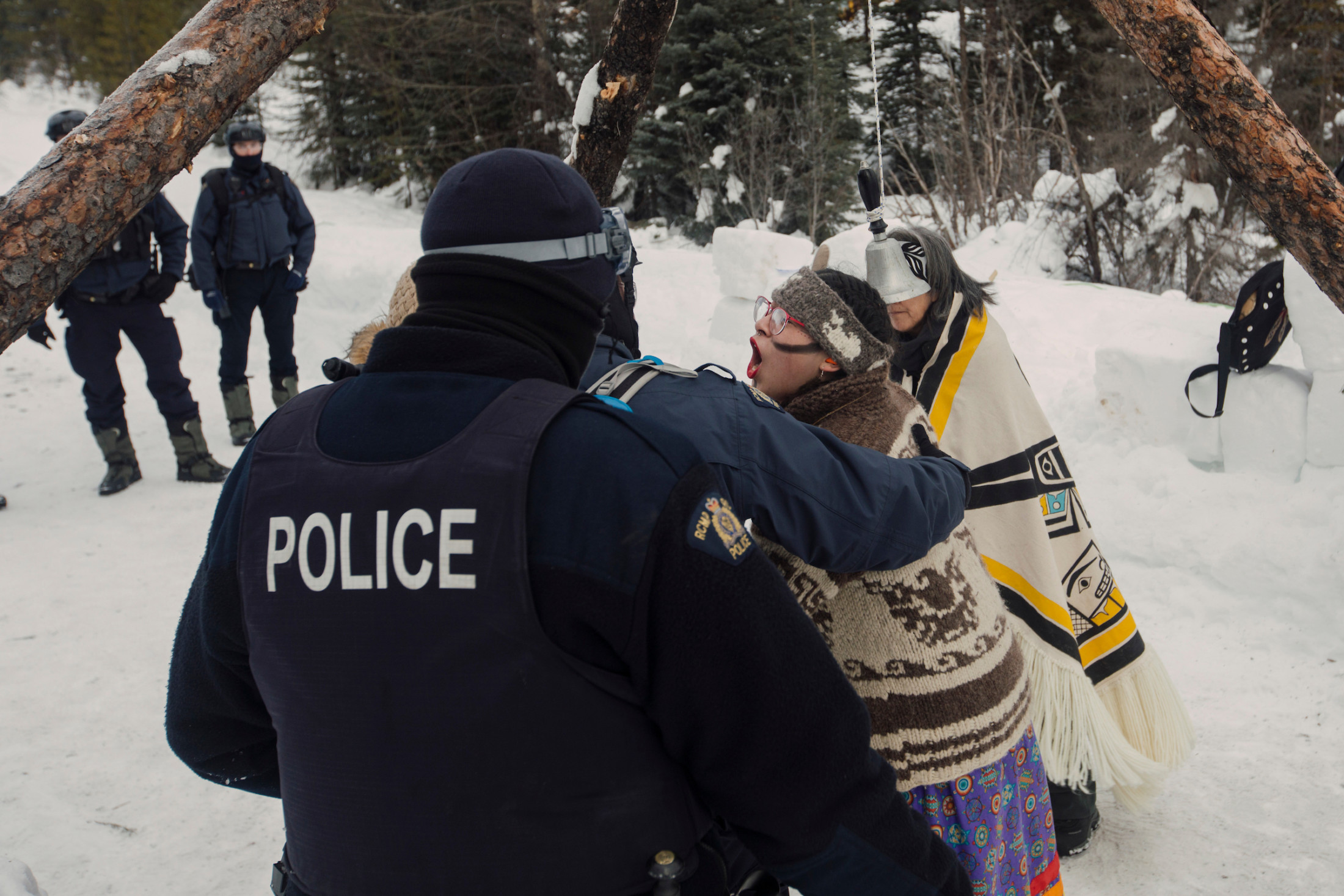 A woman is arrested as police enforce Coastal GasLink’s injunction at the Unist’ot’en Healing Centre near Houston, B.C., in February 2020. Photo: Amber Bracken / The Narwhal

Join our newsletterIn-depth reporting straight to your inbox
SIGN UP

The Unist’ot’en and Gidimt’en Clans brought two wetlands areas of concern to the attention of the Environmental Assessment Office this spring. When inspection officers investigated, they found construction had begun in these areas prior to proper surveying and planning.

The assessment office then inspected the remainder of the pipeline route and found the company’s wetlands management plan had not been followed in any of the wetlands along the route designated “ecologically and socioeconomically important,” according to a news release from the Unist’ot’en Dark House, of Wet’suwet’en Nation, on Monday.

Coastal GasLink produced its own wetlands management plan “and cannot claim ignorance of the requirements laid out within it,” Unist’ot’en Dark House said.

As part of that plan, and under Coastal GasLink’s environmental assessment certificate, the company is required to conduct surveys of these ecologically sensitive areas prior to clearing and develop site-specific plans for mitigating any adverse effects caused by construction or clearing.

B.C.’s Ministry of Environment and Climate Change Strategy declined an interview request but said in a statement that 42 wetlands areas are affected. The Unist’ot’en Dark House release says there are nearly 300 protected wetlands along the pipeline route and Coastal GasLink hasn’t developed site-specific mitigation plans for any of them. It adds that nearly 80 per cent of the pipeline right of way has already been cleared, affecting most of these protected wetlands.

The assessment office issued two non-compliance orders — one on June 16 for not taking measures to limit the damage done to wetlands and the other on June 22 for proceeding with work to clear the sites for construction prior to conducting the required surveys.

Coastal GasLink must now cease construction within 30 metres of wetlands areas designated as socioeconomically important until construction preparation surveys are completed and an expert in wetlands conservation, on behalf of the company, has visited each site to identify options for minimizing the harm caused to the area during construction.

The orders are accompanied by another non-compliance order issued on June 16 due to workers’ lack of efforts to mitigate harm to whitebark pine, an endangered species in Canada. Last year, the company faced another order after initiating work prior to notifying trapline owners in the area around Houston.

Jason Slade, technical adviser to Unist’ot’en Dark House, says the Wet’suwet’en have been asking Coastal GasLink for months for site-specific plans regarding clearing and construction in wetlands.

“They have to cross beaver ponds and swamps and such,” he explained. “They must have a plan.”

But Coastal GasLink never gave a definitive answer and only said it was an “iterative process.”

The recent determination by the assessment office “shows Wet’suwet’en leadership that this lack of planning was actually illegal under the Environmental Assessment Act,” said the Unist’ot’en Dark House news release.

Coastal GasLink said it is complying with the stop-work order.

“Environmental protection is a top priority for us,” spokesperson Suzanne Wilton told The Narwhal, adding that work has already begun under the enforcement orders to survey and report on the damage.

“A lot of these places have been seriously damaged,” Slade said. “But do you really think those same guys who did the damage in the first place are going to go back out there and say, ‘Oh, we did a lot of damage,’ or are they going to say, ‘We did a really good job’? ” 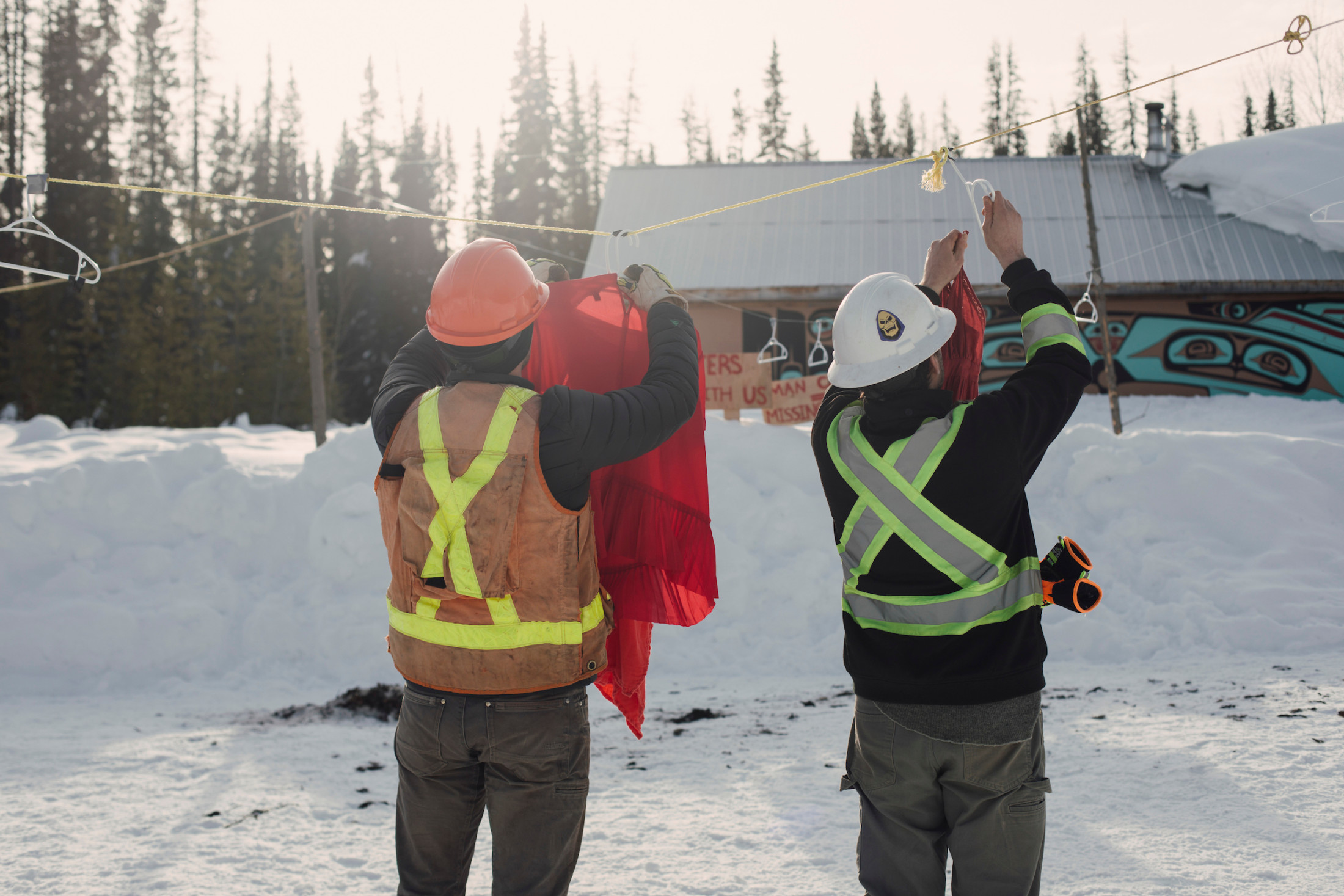 Coastal GasLink workers take down an installation of red dresses, hung to signify Missing and Murdered Indigenous Women and Girls, after RCMP enforced an injunction at the Unist’ot’en Healing Centre near Houston, B.C., in February 2020. Photo: Amber Bracken / The Narwhal

Pipeline work to continue but not without bumps

While Coastal GasLink completes its wetlands plans, work continues in other areas where work camps are being built and populated in preparation for laying the pipeline this summer. As of May 31, roughly 77 percent of the route had been cleared and installation had started in Kitimat earlier this month.

Pipeline materials are stored in Houston, but Sleydo’ Molly Wickham, a Gidimt’en spokesperson, says she hasn’t seen much work happening on Gidimt’en or Dark House territory. In Vanderhoof, about two hours away, it’s a different story. Construction on a 900-bed work camp is well underway.

“The MOU is a separate issue,” explains Sleydo’ Molly Wickham. “It has nothing to do with Coastal GasLink.”

As for the pipeline?

“We are still in opposition,” she says emphatically. “People should know that. The eviction order stands. And we’ll enforce that eviction order.”

In a statement, the B.C. Ministry of Indigenous Relations and Reconciliation said the memorandum of understanding is a first step toward resolving “difficult and complicated issues” around Wet’suwet’en rights and title.

“By resolving these issues, we can avoid the kind of conflicts we’ve seen on the land, and work together for the benefit of all people who live in the region,” the statement said.

The ministry acknowledged that “at the time the MOU was reached, all parties at the table recognized that the differences relating to the [Coastal GasLink] project remain. That has not changed.”

RCMP continue to have a presence on Wet’suwet’en territory

As the pipeline project continues, so too does enforcement of Coastal GasLink’s “right of way” on Wet’suwet’en territory.

A June 29 Gidimt’en news release shows photos of three RCMP officers — including one armed with an assault rifle — conducting foot patrols at a newly built smokehouse near the Wedzin Kwa on Gidimt’en territory. Photos taken shortly after show Coastal GasLink workers posting a notice on the smokehouse saying it is “within the Coastal GasLink permitted construction footprint” and “must be relocated” prior to work commencing in the area. The images were caught on June 3 by security cameras belonging to the Gidimt’en.

While it’s unclear who made the complaint, Gidimt’en Clan member Jennifer Wickham says it’s clear the “RCMP are acting as security for [Coastal GasLink].”

“It’s shocking and disturbing that they would come out to the yintah [territory] so heavily armed,” she says. “Bringing those types of weapons to a smokehouse is so unnecessary.”

She points out that when the RCMP carried out their arrests earlier this year and in 2019, they were similarly armed “and even then it was unnecessary.” 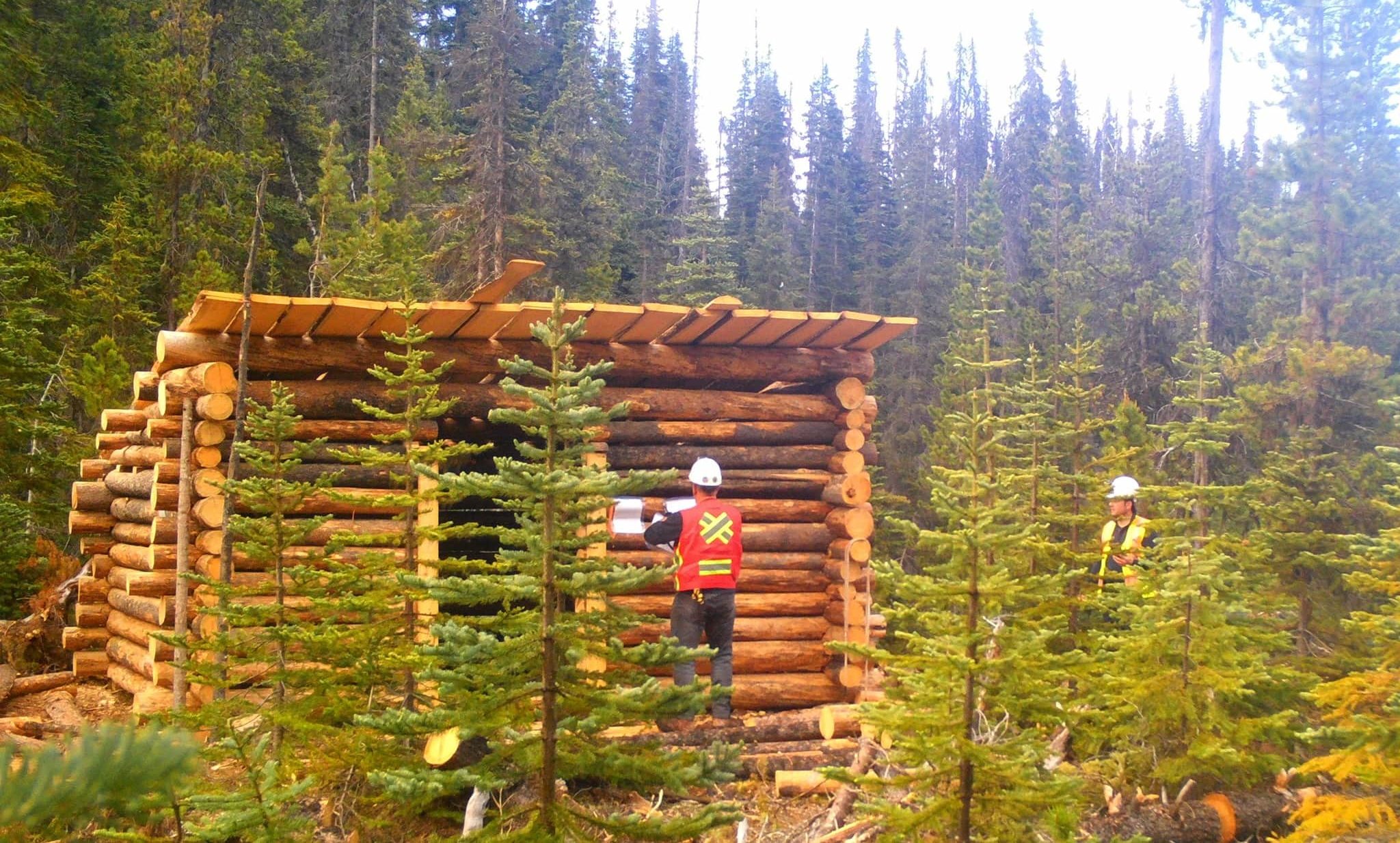 Coastal GasLink workers post a notice on a smokehouse on Gidimt’en territory demanding that it be removed because it’s on the company’s “permitted construction footprint.” Photo: Wet’suwet’en Access Point on Gidimt’en Territory / Facebook 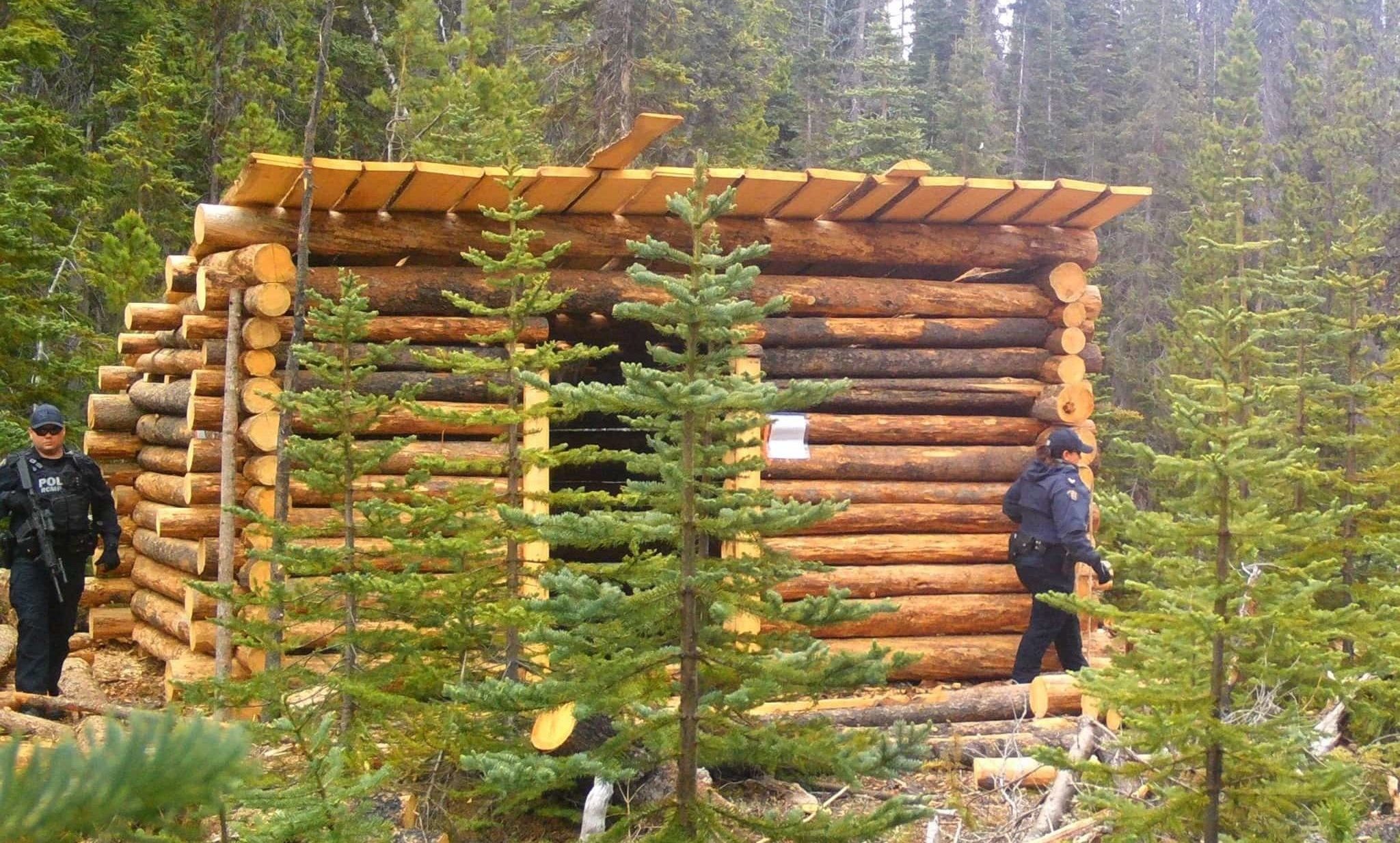 RCMP officers circle a newly built smokehouse on Gidimt’en territory following a complaint that it was on a Coastal GasLink “right of way.” Photo: Wet’suwet’en Access Point on Gidimt’en Territory / Facebook 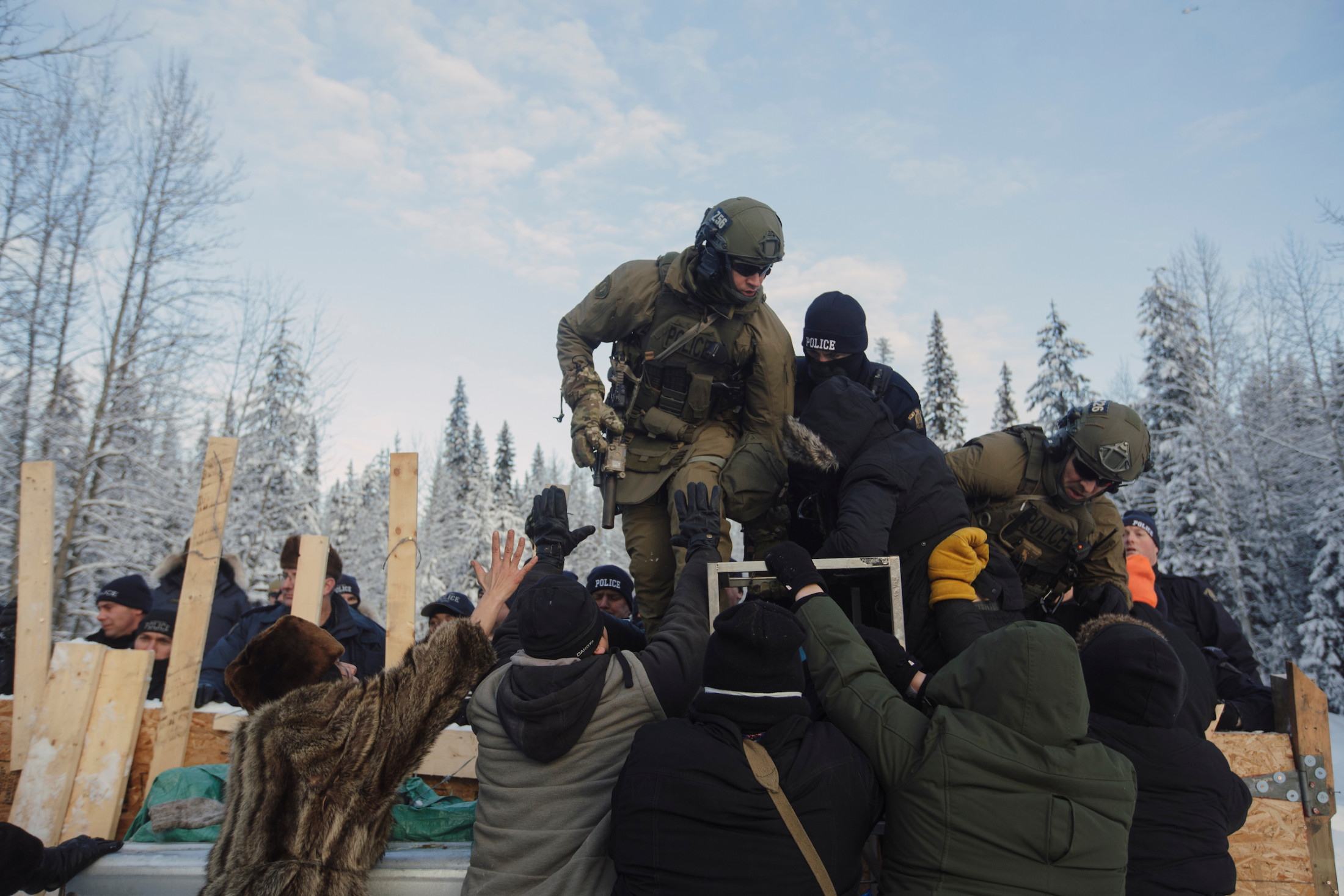 Heavily armed police climb over a barricade to enforce the injunction filed by Coastal GasLink pipeline at the Gidimt’en checkpoint near Houston, B.C., in January 2019. Photo: Amber Bracken / The Narwhal

The smokehouse is poised to be used as the spring salmon runs start. Food fishing is a protected Indigenous Right and has also been declared essential in B.C. during the COVID-19 pandemic. “Wet’suwet’en people must be able to exercise this right without fear of police intimidation or violence,” the Gidimt’en news release reads.

RCMP spokesperson Sgt. Janelle Shoihet says the officers were responding to “a report that a cabin had been built directly on the Coastal GasLink right of way in breach of the current court injunction.”

Shoihet says the decision to arm would have been made by the officer. She says they had recently observed a man armed with a rifle nearby but acknowledges he may have been armed for bear protection. “RCMP officers venturing into the bush are also concerned about bear encounters and a long gun — rifle or carbine — would generally be the weapon of choice should an encounter occur that could result in serious injury.”

“The Wet’suwet’en Hereditary Chiefs, joined by the United Nations Committee for the Elimination of Racial Discrimination, have repeatedly called upon the RCMP to withdraw from Wet’suwet’en territories, to prohibit the use of force and lethal weapons and to cease the forced evictions of Wet’suwet’en people from our unceded homelands,” the news release reads.

“This is a really important time in our history. This isn’t just going to go away. I feel like this is going to be increasingly tense. I don’t think people are willing to be pacified anymore with all of the cumulative injustices that are happening, and they’re coming to a head.”

Matt Simmons is a writer and editor based in Smithers, B.C., unceded Gidimt’en Clan territory, home of the Wet’suwet’en/Witsuwit’en Nation.