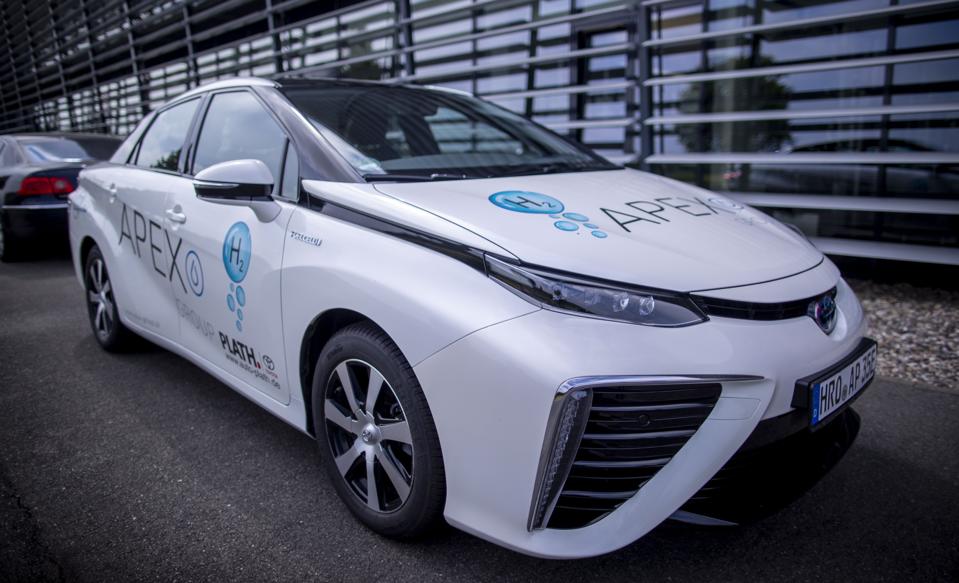 12 June 2020, Mecklenburg-Western Pomerania, Laage: A car powered by hydrogen is standing in front of the company Apex Energy. The car runs on a fuel cell. Starting this fall, Apex will supply green energy for industry and commerce, housing associations, public transportation, or for the temporary storage of control energy. In this way, up to 300 tons of hydrogen can be produced annually from exclusively renewable energy sources. Photo: Jens Büttner/dpa-Zentralbild/ZB (Photo by Jens Büttner/picture alliance via Getty Images)

In a previous article, I analyzed the carbon footprint of producing hydrogen from fossil fuels. That is how over 95% of the world’s hydrogen is currently produced.

To recap, the carbon footprint of hydrogen production from natural gas in a steam methane reformer (SMR) is higher than from directly burning the natural gas.

However, it is possible in theory to capture the carbon dioxide from this process and either use it or sequester it. It is not typically done for economic reasons, but it is possible.

But that also begs the question of whether there are environmentally better pathways for hydrogen production. The SMR route has historically been the most economic pathway, but there are potential pathways with lower carbon emissions.

Most of the hydrogen not produced by steam reforming is produced by electrolysis of water. When an electric current is passed through water, the reaction can be represented as:

Then when hydrogen is combusted or reacted in a fuel cell, it combines with oxygen and once again becomes water.

What Does It Mean That America Is A Net Exporter of LNG?

However, the laws of thermodynamics require that it always takes more energy to split water into hydrogen and oxygen than you can obtain from the hydrogen.

Why, then, would you ever spend more energy to produce hydrogen than you can obtain from using it?

There are a couple of scenarios in which this could make sense.

Renewable power has grown rapidly in the past decade. In some places, it has created intermittent periods of excess power. For example, California has created so much solar power that at times it was cheaper to pay Arizona to take the excess power than to significantly curtail power. This scenario has also been seen in European countries like Germany, and it is likely to increase in frequency as more renewables are added to the grid.

Negatively-priced power would be an ideal source of electricity for hydrogen production, depending on the level of intermittency. It may not be economical to produce hydrogen only a couple of times a month, but as more renewables are added to the grid, the potential to produce too much power at times will grow. Hydrogen produced via electrolysis and stored for later use – essentially acting as a battery – could be a good solution to help smooth the intermittency.

But hydrogen production from electrolysis doesn’t require negatively-priced power to be economical. It only requires that the value of the electricity inputs is less than the value of the hydrogen outputs. That is why today some companies will convert two BTUs of natural gas into one BTU of liquid fuel. The single BTU of liquid fuel is more valuable than the two BTUs of natural gas.

If the goal is to minimize the carbon footprint, the electricity inputs should be low-carbon. That means either renewable or nuclear power – if the price isn’t too high.

Putting it into Practice

This is not just theoretical. I have visited an energy lab in Hawaii where this is actually being done. The lab was producing 12 kilograms of hydrogen per day, which has an energy content of about 12 gallons of gasoline. That is not at commercial scale, but it demonstrates viability. And of course, the economics should improve with scale, and with cheaper solar power.

The DOE is also funding work on High-Temperature Steam Electrolysis (HTSE) using high-temperature nuclear systems. This process uses electricity and heat generated from nuclear power in an integrated electrolysis system. In 2018, the DOE funded three projects that are attempting to advance this technology. The International Atomic Energy Agency (IAEA) estimates that the electricity input could be about 35% less than that of conventional electrolysis.

The same source estimates that some nuclear-based processes, and wind-based electrolysis have an even lower carbon footprint.

The carbon footprint of most of the world’s hydrogen production is relatively high. However, the use of excess intermittent power, or just low-priced, low-carbon electricity offers the possibility of hydrogen production at a much lower rate. Current estimates are that these pathways have 80-90% lower carbon footprint than the SMR process that currently produces most of the world’s hydrogen.

Robert Rapier Robert Rapier is a chemical engineer in the energy industry. Robert has 25 years of international engineering experience in the chemicals, oil and gas, and renewable  industries, and holds several patents related to his work. He has worked in the areas of oil refining, oil production, synthetic fuels, biomass to energy, and alcohol production.
RELATED: