Mary Ellen Turpel-Lafond said presence of racism in B.C. health-care system is not in question 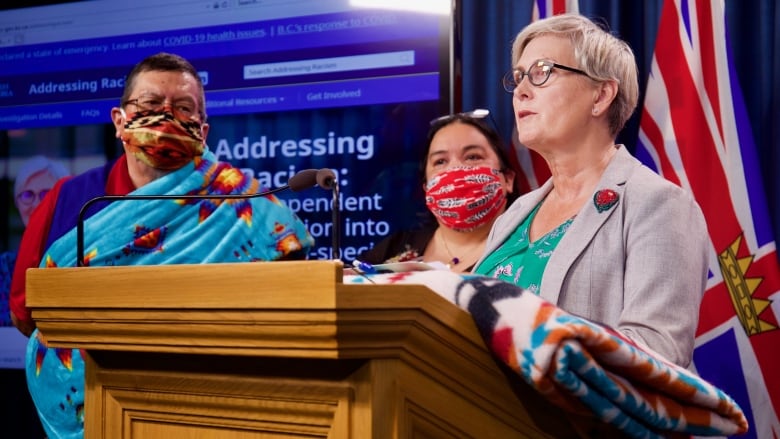 Turpel-Lafond said a report will be made public within months. (Mike McArthur/CBC)

Independent investigator Mary Ellen Turpel-Lafond, who was asked to look into B.C.’s health-care system, says her examination will be wide-ranging and will attempt to determine the range and extent of anti-Indigenous racism in the system.

“This investigation is not trying to discover whether racism exists in B.C.’s health-care system. It does exist,” she said during a news conference.

On June 19, provincial Health Minister Adrian Dix announced that B.C. would be investigating allegations health-care staff in emergency rooms were playing a “game” to guess the blood-alcohol level of Indigenous patients.

Turpel-Lafond said the purpose of the investigation, led by a small team, is not to “name and shame,” but to be a truth-telling exercise. The review will be conducted in stages, starting with a focused look at the “game” played in hospital emergency rooms.

She encouraged Indigenous people to come forward with their stories, as well as people working in the health-care system who may have been bystanders to racist actions — adding she’ll be disappointed if her final report does not include participation from health-care professionals.

“You will face no incrimination in your workplace,” she said.

“I can say though if I do find that there have been violations of the criminal code or the standards of health professions … as I look into these investigations, I will report that to the appropriate authorities, to be dealt with by them.”

At a briefing later Thursday, Dix said the participation of Indigenous British Columbians as well as health professionals across the province would ultimately lead to a better health-care system.

“This report will be acted on. This is essential. This is important,” Dix said.  “That is why we are asking, in particular, Indigenous people across British Columbia and health care professionals to engage with this so we can make our health-care system better and safer for everybody.”

Turpel-Lafond said a survey, as well as a private phone line and email address, will be made available for people to call in and report their experiences. She said she is working with the First Nations Health Authority to ensure there are mental health supports for people coming forward, and that people with historic experiences of racism in health care are also encouraged to speak up.

Turpel-Lafond said early in her investigation she has found several themes emerging — primarily, one where Indigenous people seeking care are repeatedly questioned about whether they are intoxicated or dealing with an ongoing addiction before they receive care.

“The stories I’ve heard are very difficult stories,” she said, noting some have resulted in a person losing their life.

Charlene Belleau, the chair of the First Nations Health Council, says the investigation is long overdue.

“It’s important in my mind for the politicians, for the health-care providers, and people within our province to connect with our pain throughout this investigation, to recognize the trauma our people are going through, and somehow, collectively be able to cleanse the pain in order for us to move towards reconciliation.”

Turpel-Lafond also said that as B.C. experiences two simultaneous health crises, with the COVID-19 pandemic and the overdose epidemic, she does not want to discourage Indigenous people from seeking care.

She said a report will be made public within months, and that she expects the recommendations to be implemented fully, with “significant” pressure placed on the health-care system to do so.

“The pace of the investigation is an intense pace over the last few weeks. We will be working hard over the next few months … We must not have any stone unturned on this issue.”

Turpel-Lafond said an investigation into the treatment of Indigenous people in B.C.’s health-care system is long overdue, and the nature of “the game” — played by some, tolerated by others — indicates racism is institutional and systemic.

“As an Indigenous person I’m not completely shocked on one hand,” she said, adding the extent to which issues have been “sat on” is surprising.

Métis Nation British Columbia (MNBC), the governing body for Métis in B.C., have said health-care staff called the game “The Price Is Right.” Physicians and nurses would try to guess the blood-alcohol level of incoming patients they presumed to be Indigenous.

Clara Morin Dal Col, president of Métis Nation B.C., said she was fully confident in Turpel-Lafond to move this investigation forward — but warned it would be a long, difficult process.

“We were the ones who brought this story to light, and we were flooded with calls from Indigenous people, health-care professionals, and it goes much deeper than the game,” she said.

CBC News later learned that the Saanich Peninsula Hospital on Vancouver Island was one of the hospitals named in allegations.

Turpel-Lafond said the health authorities where the behaviour was reported should be taking immediate action, rather than waiting for the findings published in her report.

“We don’t have to wait. There are things that can be done to address anti-Indigenous racism immediately,” she said.

Anyone with specific experience or knowledge of racism in the health care system is asked to share information by telephone at 1-888-600-3078 or by email: Addressing_Racism@gov.bc.ca.