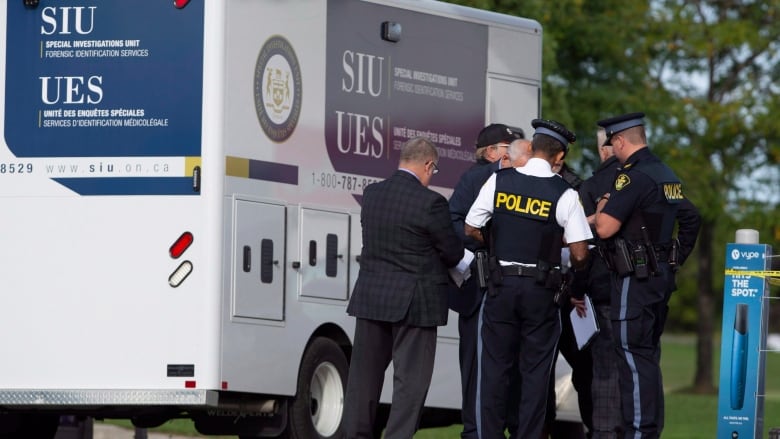 The provincial Special Investigations Unit probes incidents in Ontario involving police where there has been a death, serious injury, or allegations of sexual assault. (Peter Power/Canadian Press)

Against the backdrop of a global pandemic, conversations about race, policing, and police oversight are raging.

Much of this current movement’s impetus is due to the killing of George Floyd by a white police officer in Minneapolis in May, and the worldwide protests that followed.

But in Ontario, many of these conversations are inspired incidents like the death of Regis Korchinksi-Paquet after Toronto police were called to her family’s apartment, and the fatal shooting of Ejaz Choudry by Peel police during a mental health call.

Both cases are being handled by the province’s Special Investigations Unit (SIU), which conducts criminal probes into incidents involving police that result in serious injury or death, as well as allegations of sexual assault.

A heightened public interest in those cases has led to more scrutiny into the role of the SIU and the criticisms levied against it: namely, that it is not a truly impartial oversight agency, and has too many links to law enforcement — something the unit itself denies.

Who are the SIU’s investigators, and how many are former cops?

Perhaps the most common criticism of the SIU is that it employs too many former police officers, calling its impartiality into question.

“Historically, a very high proportion of SIU investigators have police backgrounds,” said Scot Wortley, a longtime researcher and professor at the University of Toronto’s Centre for Criminology and Sociolegal Studies.

But SIU spokesperson Monica Hudon said the organization would “take issue” with the idea that it has a pro-police bias.

She pointed to an Ontario ombudsman’s report from 2008, and said that while it “called attention to a perception of pro-police bias among the work of the SIU, the report concluded that there was no objective evidence that any individual case had been tainted by improper motives.”

Hudon also said in an emailed statement that of the 13 lead investigators currently employed by the SIU, 12 have never worked as police officers. Instead, she said, their backgrounds are with organizations like the Ministry of Labour, Canada Post, and the Ministry of the Attorney General, among others.

But those numbers don’t account for the part-time investigators who cover much of the day-to-day work conducted by the unit.

Back in 2008, there were 30 “as-needed” investigators located throughout the province, and 24 of them were former police officers, according to the ombudsman’s report.

Hudon did not respond when asked how many part-time investigators are working for the SIU, and how many of them are former cops.

“My personal view is a mixture is not a bad thing,” Scott said.

“You want the experience of some seasoned investigators to do these investigations because at their highest, they’re homicide investigations, and although the SIU doesn’t tend to lay very many charges, the ones they do tend to be high profile.”

So what has the SIU’s charge record been like of late?

The SIU’s charge rate was slightly higher in 2017, with charges against 20 officers across 18 cases, amounting to 4.9 per cent of the 367 cases that were closed that year.

Asha James, a lawyer at Falconers LLP whose practice centres on public-interest litigation alongside human rights and constitutional law, told CBC News that she feels in recent years, the SIU has laid more charges than it would have in the past.

“I think just because we don’t hear about every charge that’s laid doesn’t mean that they’re not [laying them],” she said.

But, she added, when there’s an incident that garners media attention that doesn’t lead to charges, community members get upset, often “rightfully.” .

Barry Swadron, a Toronto lawyer who has represented many people in cases involving police through the years, has also crossed paths with the SIU.

“In some cases my clients end up saying, ‘We really didn’t get a fair shake,'” he said.

Hudon, for her part, said any suggestion that the SIU’s charge rate is low implies that there is an appropriate rate at which charges should be laid, which she attests would “clearly be inappropriate.

“Our investigations are driven by the evidence we find. Essentially, this unit must approach each investigation with objectivity and without a bias of criminality,” she said.

Do officers have to talk to the SIU?

But Wortley says in analyzing many SIU reports, he’s seen instances where the organization has said there just isn’t enough evidence to lay a charge — something he says could be attributed to officers not cooperating with investigators.

“In many cases, I think that may contribute to the inability of the SIU to just gather enough evidence to warrant a charge or not,” he said.

“Obviously critics are going to argue that the police culture is very strong, and it would take a lot for an officer to provide evidence that would incriminate a fellow officer, and there would be grave consequences to pay internally if an officer did provide such evidence.”

So should officers be compelled to speak to the SIU?

“Police associations would fight that statement to the end,” Wortley said.

The regulations governing police officers and their duty to speak with the SIU are complicated. In any investigation, officers are broken down into two categories: witness officers who saw what happened, and subject officers who are themselves under investigation.

Under the current legislation, subject officers cannot be compelled to speak to the SIU.

“I understand why the public has difficulty with that, because clearly, the person who knows the most about the incident is probably the person that in a shooting, pulled the trigger,” Scott said.

But, he noted, the mandate of the SIU is to carry out criminal investigations, and in Canada, anyone who is suspected of a crime has the right to remain silent.

It would be possible for the province to produce legislation that would compel subject officers to provide a statement to the SIU, Scott said. But if charges were laid, it would not be admissible in court, because it’s a compelled statement.

“So I think we have to ask ourselves, ‘What’s the value of having a statement that could never be used in a criminal proceeding against the accused if a charge was laid?'” Scott asked.

Police officers’ entrenchment in the justice system compounds the problem of accountability, Swadron said, so it’s extremely tough for that very system to judge them properly.

“Sometimes, even when the SIU does lay a charge, there are often plea deals to reduce it,” he said.

“That’s been my experience — that in the few cases where police officers are charged, they get away with a result that a citizen would never have gotten away with.”

How long do SIU investigations take?

Almost invariably, people want to know how long an SIU investigation will take. In the most serious cases, answers usually don’t come quickly.

According to the SIU’s annual report for 2019, the unit closed 363 cases last year, with it taking an average of just over 136 days to finish them.

But in situations that are “full-blown” investigations that result in director’s reports or charges, the average length for a case balloons to just over 187 days — which is still down from almost 202 days the year before. Both the deaths of Korchinksi-Paquet and Ejaz Choudhry will likely fall into the latter category.

Still, Swadron says the length of time it takes for SIU investigations to be completed always bothers him.

“If the decision takes a year or two, a lot of the climate is such that the people aren’t going to remember what happened,” he said.

“The heat of the moment is gone.”

Adam Carter is a Newfoundlander who now calls Toronto home. He enjoys a good story and playing loud music. You can follow him on Twitter @AdamCarterCBC or drop him an email at adam.carter@cbc.ca.