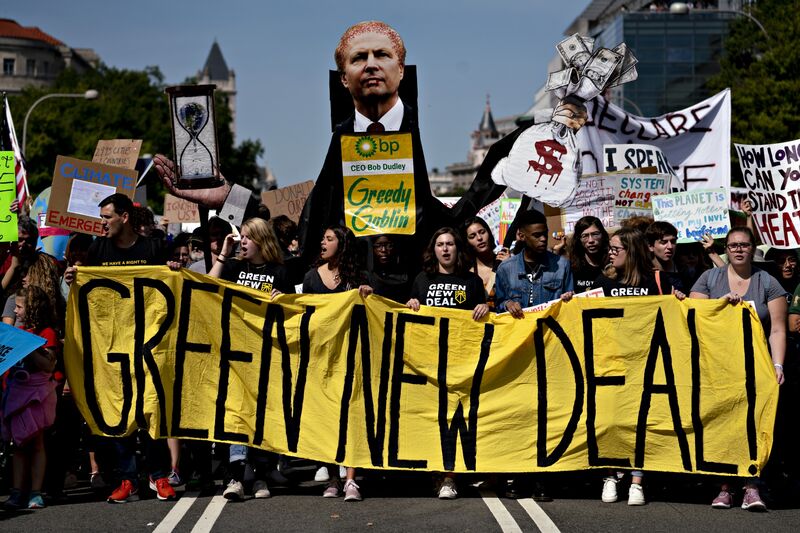 Discussions about how to fight climate change almost always conclude with a lament over the “lack of political will.” It’s as if the roadblock preventing these clean-tech visions and white-paper dreams from becoming market-driven reality is an irrational, unforeseen hiccup.

That’s a comforting fallacy. The lack of political will is the whole point: Climate change is a problem caused by entrenched systems of social, economic, and political power. To overturn that, the climate community would do well to learn from the fight for racial justice.

Many climate advocates and researchers seem to be just now starting down this line of reasoning, but not all. The Green New Deal put forward in February 2019 in the U.S. incorporated social justice goals into its vision for an economic shift away from fossil fuels. That turned out to be too politically ambitious for that moment, but it helped energize a constituency that has since taken on the mantle of leadership in the American climate movement. Last week the House Select Committee on the Climate Crisis—itself a product of that constituency’s lobbying—released an action plan to “address the urgency of the climate crisis and begin to repair the legacy of environmental pollution that has burdened low-income communities and communities of color for decades.”

With a divided Congress now months away from the November election, these proposals aren’t going to pass into law. But they’re still a step towards addressing the way disadvantaged groups in the U.S. fare significant climate risk. An even bigger step would be for climate-focused policymakers to include disenfranchisement in the definition of climate change.

J. Marshall Shepherd—a distinguished professor and director of the University of Georgia’s Atmospheric Sciences Program, a former head of the American Meteorological Society and one of the U.S.’s most prominent commentators on weather and climate change—knows about interconnected institutions and phenomena. Before joining academia, he spent years working as a NASA Earth systems scientist. “I can’t help but see things in a connected way because that’s how the Earth works,” he says.

When racism and climate change are put into context with each other, you get the drive for climate justice, he says. That is, you get the realization that those most vulnerable to flooding, drought, storms, and heat are also the people most likely to face race-based discrimination and state-sponsored violence, to be on the losing end of economic inequality, and face worse health outcomes. New data released by the Centers for Disease Control and Prevention in response a lawsuit by the New York Times show that Black and Latino people have been three times more likely to contract Covid-19, and almost twice as likely to die from it.

“The social, economic, and political power structure have created neighborhoods in New Orleans or Houston or Atlanta that will be more vulnerable to extreme weather events, or at least have less resilience to them,” he says. “You can’t overlook that.”

After the killing of George Floyd and the nationwide protests that followed, Shepherd published a short book called The Race Awakening of 2020: A 6-Step Guide for Moving Forward. He named the book after the awakening he sees coming. “I’m an optimist,” he says. Just as the energy economy will clean itself up through an “ultimate and inevitable shift,” he anticipates 2020 bringing a wider shift among Americans on race. “We’re not planting any new flags here from the perspective of [Black Americans], right? All of this we’ve known and experienced and lived. But at least it seems as though there was this awakening by others.”

The book spends little time in the author’s professional domain. Instead, it lingers on reminiscences, including one about a beloved Florida State University college professor who provided him with a useful definition of racism. “Dr. [Bill] Jones’ definition was framed around the idea that racism is steeped in a power imbalance,” Shepherd writes. “When a certain racial group holds the majority of political, economic, and societal power, they can explicitly, implicitly, or systematically discriminate against others or suppress equality to maintain the balance of power.”

In other words, racism is a systemic problem impossible to separate from the institutions and networks that perpetuate it. So is climate change, but it isn’t talked about that way nearly often enough. The people who write laws and set policy get up every morning and make decisions that wave climate change on through, a fact that rarely factors into scientific reports, policy studies, and popular books on climate.

Shepherd’s is far from the only book about discrimination to acknowledge the systemic analogy between racism and climate change, however. In her book So You Want to Talk About Race, Ijeoma Oluo uses climate change as an example of a problem that doesn’t go away just from acknowledging it. “While we talk about global warming and worry about global warming, most of us go about our days the same as we did before we ever heard the term because it’s just easier to talk than to do. And global warming continues.”

Coal, oil and gas don’t burn themselves. Their continued use is the result of active decision-making, carried out by inertia-bound institutions whose hold on power depends on maintaining the unsustainable status quo. Any change in that structure isn’t going to come from technology development, or even market forces. It requires a political shift.

Eric Roston writes the Climate Report newsletter about the impact of global warming.