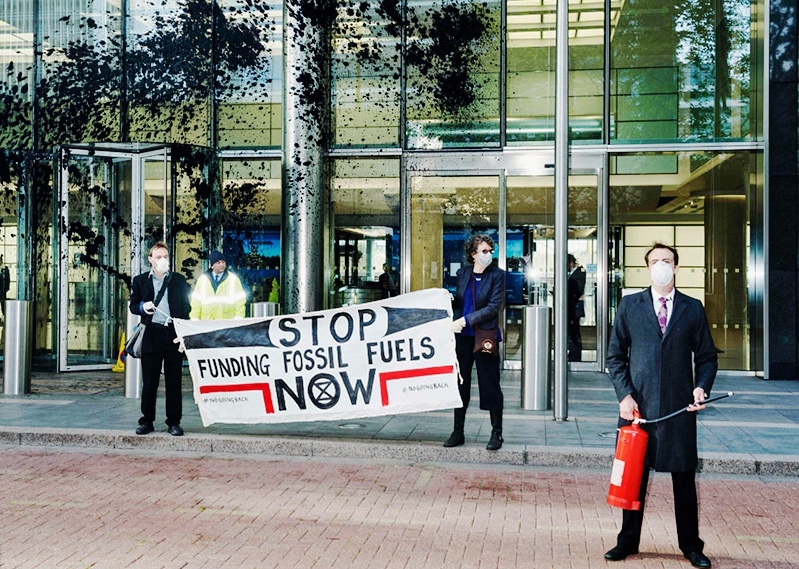 CLIMATE activists staged a mock crime scene outside Barclays HQ yesterday to call out the firm on its history of “criminal” investments from the slave trade to fossil fuels.

Environmentalists gathered outside the bank’s HQ in Canary Wharf to deliver a letter to CEO Jes Staley to demand that Barclays cease bankrolling the fossil fuel industry and commit to transparency over its dealings.

The British multinational bank is the top banker of carbon-intensive companies in Europe with investments of $85bn (£67bn) between 2015-2018, according to a 2019 report.

Activists donned “forensic scientist” costumes and marked outlines of bodies with tape outside the London HQ to represent the “ongoing investigation” into Barclays’s “crimes.”

Former banker and Extinction Rebellion activist Chidi Oti-obihara said: “Barclays has a history of not being open about its inhumane and exploitative financing, repeatedly downplaying its huge role in the slave trade, and it is now downplaying its role in global ecocide.”

Barclays has been criticised again in recent weeks for its historical links to slavery, having merged with the Colonial Bank in 1925 which invested in the slave trade.

The bank also continued to do business with apartheid era South Africa when most other firms had stopped.

Protester Jess Maddison urged the bosses of Barclays to “alter their ways” and “invest in our future instead of our demise.”

Unlike other European banks which have adopted stricter policies on climate change, Barclays has invested $24bn (£19bn) in companies expanding the extraction and use of fossil fuels.

The bank is also under growing pressure to back out of its major role in the fossil fuel industry from its shareholders, and leading investment group The Investor Forum.

Yesterday’s protest was organised by a coalition of environmental groups including Extinction Rebellion UK, Stop Ecocide, Sunrise Project and Urgewald.

Barclays CEO Urged to Confront Slavery and Act on Climate