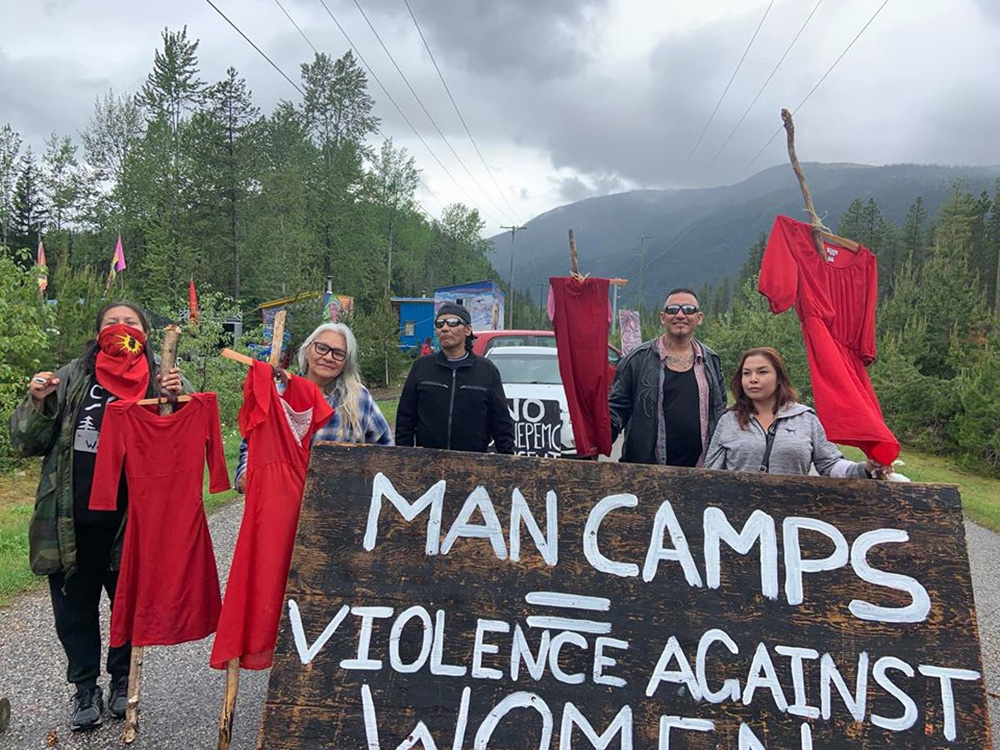 The RCMP is harassing the Tiny House Warriors while failing to press ahead with an investigation of an attack on their camp, says Kanahus Manuel. Photo via Facebook.

Kanahus Manuel, one of the Tiny House Warriors in the camp about 175 kilometres northeast of Kamloops, said she’s convinced “there was not even any attempt by the RCMP to look for these guys.”

The group says three men and a woman drove two all-terrain vehicles into the encampment in mid-April, knocked down signs, tore down red dresses used in a memorial to missing and murdered and Indigenous women, stole a truck and rammed it into a house and punched and kicked an Indigenous man.

Parts of the attack were captured on video, including images of two of the men.

Amnesty International responded to the incident with a letter to Premier John Horgan and the RCMP calling for an investigation and protection for the camp.

The Tyee reached out to the RCMP’s Clearwater department to request an interview but they declined.

Cpl. Jesse O’Donaghey said in an email that the criminal investigation is still underway.

“Tip information has been received by our investigators who have been working diligently to follow up on that information in an effort to advance the still ongoing investigation,” he said. “Any further updates will be provided as they become available.”

Manuel, whose people are Secwepemc and Ktunaxa, said she hasn’t heard from the police since giving her statement in April.

Joe Killoran, a criminal defence attorney in Kamloops representing Manuel in this case, says he wants justice for the group but is uncertain the RCMP will arrest the perpetrators.

“In my mind, they’re clearly on the side of the people who come to harass the Tiny House Warriors,” he said.

Officers who visited the camp after the attack weren’t even going to take fingerprints, Manuel said, but she told them to take a beer can left behind by one of the assailants.

“But I don’t even know if they ran the fingerprints,” she said.

Manuel adds that when she gave her statement, she felt the officer’s questioning was racist, and her lawyer eventually ended the interview.

“The questions they asked put me as a suspect instead of a victim,” she said.

“There’s a way to talk to witnesses and victims, and there’s usually quite a difference,” said Killoran. “You’re trying to make victims comfortable; you’re trying to validate victims’ experiences, and the way the officer spoke to Kanahus, he was trying to catch her.”

Manuel said the group, who live in a cluster of five tiny houses on the edge of Blue River, have faced increasing racist harassment.

Residents of Blue River, a town of about 260 people on the North Thompson River, are holding regular rallies outside the camp, she said. “They want to make this a race war against us,” she said.

Killoran said those opposed to the protest are ramping up tensions. “My clients are trying to live on their ancestral homeland and these people are coming to try to provoke fights,” said Killoran.

The Tiny House Warriors faced a new challenge Thursday as chiefs from the Simpcw and Tk’emlúps te Secwépemc First Nations called on them to shut down their protest camp.

Chief Shelly Loring of the Simpcw Nation and Rosanne Casimir of the Tk’emlúps te Secwépemc released a statement condemning the “occupation and often disrespectful conduct of the Tiny House Warriors” and their “aggressive actions.”

They said the First Nations had given “their free, prior and informed consent to Trans Mountain” to build on their territories.

Manuel told the CBC she rejects the chiefs’ authority, saying its limited to their reserves.

Manuel also alleged that some businesses in the area are refusing to serve her and other people opposing the Trans Mountain pipeline expansion.

“We’re all being targeted just for being Indigenous land defenders,” she said. “This hate has encouraged other hate that we’re seeing right now.”

“I’m still dealing with the aftermath of an attacker coming to my home like that,” she said. “Since then, we’ve just had to have a lot more people here on site just for safety reasons.”

Since the incident, RCMP’s Community-Industry Response Group, a unit created to protect development projects, has been coming to Manuel’s home daily, she said. “They come here twice a day to harass us.”

Manuel posted some videos on her Twitter account showing the officers parked outside of her home and rolling their windows up as someone approaches them.

Killoran said the RCMP is targeting the group. “They’re just overpolicing her and they don’t seemingly police everybody else,” he said.

The Tiny House Warriors are a group of Indigenous pipeline opponents whose tactics include building tiny homes on the pipeline route.

“Symptoms of colonization disappear once we have access to our territory and the wealth of our lands,” Manuel said. “All we need is our land and we’re able to heal ourselves, we’re able to organize within ourselves in our own autonomous ways.”

“We’re off the grid here and we’re able to sustain ourselves here on a small scale and we want to show native people that we can do this anywhere we want on our land,” she said. “That’s why they fear us, because we’re going to shift the way people think.”

“With the level of racism that’s being exposed throughout the world, it’s also encouraging hate as well, I believe, and I feel like it’s spilling out onto our camp,” she said.

Killoran asked the RCMP in an email whether officers would do something about the “escalating level of hostility directed towards my clients by angry visitors,” calling the April incident a “white supremacist attack.”

The RCMP responded by saying they didn’t believe the men in the video would be considered white supremacists.

“The RCMP has traditionally been the enforcer of white supremacy in Canada and I guess in that context, I’m not surprised he finds it difficult to recognize,” said Killoran.

Missy Johnson  is an intern with The Tyee as a part of the Journalists for Human Rights Emerging Indigenous Reporter program. She is a recent graduate of the Langara College journalism program.