It’s 38°C in Siberia. The science may be complicated – but the need for action now couldn’t be clearer 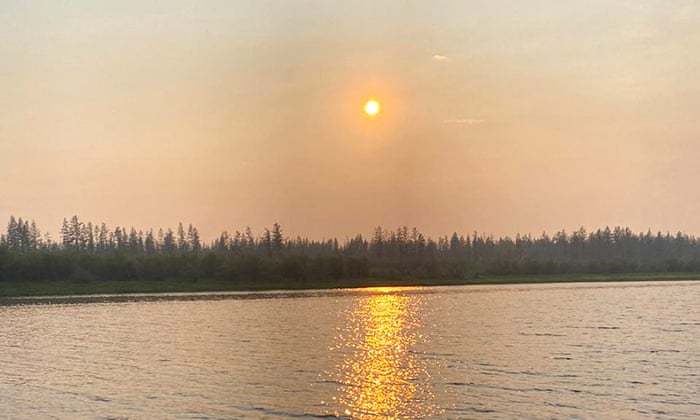 ‘Siberia has seen ‘zombie fires’ reignited from deep smouldering embers in peatland.’ A beach on the bank of the Yana river in the Sakha Republic, Russia. Temperatures of 38C were recorded nearby on Saturday. Photograph: Olga Burtseva/AP

There’s an Arctic heatwave: it’s 38°C in Siberia. Arctic sea ice coverage is the second lowest on record, and 2020 may be on course to be the hottest year since records began.

For many people, such news induces a lurch of fear, or avoidance – closing the webpage because they don’t want to hear yet more bad news. A few might think “It’s just weather,” and roll their eyes.

How can we make sense of such an event? Climate is subtle and shifting, with many drivers and timescales. But we can use this northern heatwave to illuminate the complexity of our planet. We can break this question into parts, from fast to slow.

Fast: the immediate effect is to increase wildfires. Siberia has seen “zombie fires” reignited from deep smouldering embers in peatland. This is bad news, releasing particulate air pollution and more carbon in 18 months than in the past 16 years. The immediate cause? Here in the mid-high northern latitudes, we live in unstable weather under the influence of the polar jet stream. This rapid current of air high above our heads drags weather in a conveyor belt from west to east, with alternating patches of cold and warm air, low and high pressure. Sometimes the weather patterns get stuck, creating a stable period of weather, like a heatwave. This is one long, severe example.

Does climate change make this “blocking” more likely? Maybe. The jet stream is created by the contrast between cold polar air and the warmer south. The Arctic is warming twice as fast as the global average: that means less north-south contrast, so the jet stream can become more wobbly and meandering. Loops break off like the oxbow lakes of school geography lessons, stranding particular weather patterns in one place.

And why is the Arctic warming faster? Because sea ice and snow are so bright. When they melt with global warming, the ocean and land beneath are darker, so they absorb more of the sun’s heat. Their loss amplifies our warming.

The current low in Arctic sea ice is itself partly the result of the Siberian heatwave, amplifying the usual year-to-year fluctuations. But the trend is down: the more CO2 we emit, the more the planet’s temperature rises, and the more sea ice we lose. Scientists predict the Arctic will start seeing summers without sea ice by 2050.

But it’s not irreversible. It’s not a tipping point. The sea ice would return if we could cool the climate again. Unfortunately we know only three ways to do that: extract vast amounts of CO2 from the air with trees or technology; reflect the sun’s rays at a planetary scale; or wait, for many generations.

This Arctic heatwave is a sharp spike on top of the global warming trend. That’s what makes it more intense, more likely and more of a warning: it’s a taste of the future predicted for Russia, if we burn quickly through our fossil fuels.

The real fear around the Arctic for the longer term, I find when talking to people, comes from the idea of “runaway” warming from methane release. Warming could release stores of methane – a strong greenhouse gas – from permafrost or frozen sediments at the bottom of the ocean, which would add to the warming from our own activities. There is more than twice the amount of carbon in the permafrost as in the atmosphere, and thawing has already begun.

There are big local impacts – damage to roads and buildings, because the ground can no longer bear so much weight, and an appalling story involving what appears to be anthrax release from thawing burial grounds. Permafrost thaw was even blamed by a Russian mining company for the recent collapse of a fuel reservoir, contaminating the river with 20,000 tonnes of diesel, though other factors were probably also involved.

So could this Siberian heatwave, or ones like it, trigger catastrophic warming? I see much fear about amplifying methane feedbacks, including the false idea that climate scientists don’t consider them (we do, just separately to the main global climate models). Yet for several years there has been growing evidence that this risk is less than originally thought. Carbon stored in permafrost and wetlands is predicted to contribute around 100bn tonnes of CO2 this century. That’s a lot, but we add around 40bn tonnes ourselves every year. The methane at the bottom of the ocean would take centuries to release, so as long as we limit global warming we should keep those stores mostly locked up. There are uncertainties, of course, but the stores’ impact on warming is likely to be tenths of a degree, not several degrees.

Yet every tonne of CO2 released from permafrost means one tonne fewer we can emit if we are to reach net zero emissions by 2050. Every year’s equivalent of our emissions brings our deadline closer. Every tenth of a degree of warming brings us closer to our target of 1.5°C and makes more permafrost thaw, and the impacts of climate change worse for the most vulnerable people and species of the world.

The Arctic heatwave shows us that there are few simple stories in climate change. There is always a mix of natural and human influence, bad news and slightly-less-bad news, and occasionally even hopeful news. So, more than ever, we need to avoid over-simplifying or slipping into easy tropes like “We’re all doomed” or “It’s all weather,” but to try to understand the details. Perhaps there is one simple story though: every bit of warming we avoid will help keep our planet a more familiar and an easier place to live on.

Hellish 2020 to get even hotter with ‘potentially historic’ heat wave in July, meteorologists warn