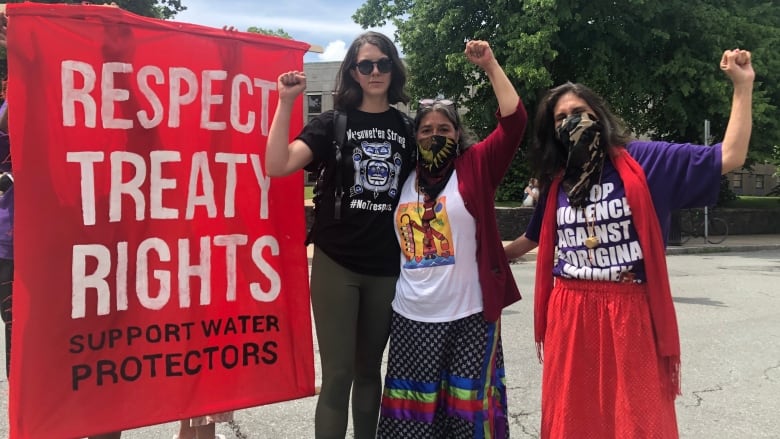 Hundreds of people took to the streets of Halifax to rally for multiple causes on Wednesday, including Indigenous rights, on the 153-year anniversary of Canada’s Confederation.

“People of Turtle Island are out celebrating a corporation, because Canada is a corporation,” said Thunderbird Swooping Down Woman, a Mi’kmaw woman who attended the rally.

“This so-called Canada Day is made on stolen lands of the Aboriginal people. It continues to be ancestral [land] … so we don’t celebrate Canada.”

The rally was sponsored by Idle No More, an Indigenous-led movement protesting the Canadian government’s changes to environmental protection laws and what they see as the endangerment of First Nation people who live on the land.

Rallies were held across the country on Wednesday as part of their Cancel Canada Day event.

Thunderbird Swooping Down Woman said she rallied alongside the Palestinian demonstrators because she understands their situation.

She said she came out to the rally to call on the Canadian government to provide answers about the Truth and Reconciliation Commission of Canada and the national inquiry into missing and murdered Indigenous women and girls.

The final report on the inquiry was released in September 2019. It includes recommendations to government, the police and the larger Canadian public to help address endemic levels of violence directed at Indigenous women and girls and 2SLGBTQQIA (two-spirit, lesbian, gay, bisexual, transgender, queer, questioning, intersex and asexual) people.

The inquiry found that Indigenous women and girls are much more likely to be murdered or to go missing than members of other demographic groups in Canada.

Robin Tress, who joined Thunderbird Swooping Down Woman at the rally, said she feels a “great responsibility” to learn about the history of First Nation people as a person with settler ancestry.

“[I’m] trying to learn how I can use my position as a white person, as a settler person, to address the historical, centuries-long systemic harms that have been done to Indigenous peoples, Black peoples, peoples of colour, so that’s why I’m here today,” Tress said.

She is also looking for answers about the missing and murdered Indigenous women’s inquiry.

“A lot of talking has been done and not a lot of action has been taken and I know that that is a huge disservice to the people who spent their time reliving their trauma [and] sharing their trauma,” Tress said.

“It’s another stall tactic of the Government of Canada that has taken hundreds of years to avoid taking real action to build justice for all.”

Thunderbird Swooping Down Woman said she was glad to see the turnout at the rallies in Halifax.

She said she hopes people learn “that Indigenous lives matter. That you are on stolen land. That we need to understand that corporations can’t just come in and take our lands.”