San Francisco (CNN Business)In the mountains outside Scottsdale, Arizona, the four people and two dogs living at Cody Friesen’s house get all the water they need for drinking and cooking from two big panels mounted on the roof.

Scottsdale — where it rarely rains and temperatures can easily rise above 100 degrees in the summer months — isn’t the kind of place where water is in abundance. But Friesen, an associate professor of materials sciences at Arizona State University, is also the founder of a startup that he says has come up with a solution for gathering water, even in this desert climate.
Called Zero Mass Water, it uses solar-powered rooftop panels, such as the ones on his house, to run a water-gathering system that sounds almost like alchemy: It captures moisture from the air, cleaning and distilling it so Friesen can use it to make dinner or give the dogs a bowl of water to lap up.

Humans have a water problem

Though the earth is covered with plenty of water, the amount of usable water is finite and tiny. Salty ocean water makes up the vast majority of total water on the planet, while freshwater is just a fraction at 2.5%. And of that freshwater, only a small sliver is actually available for us to use, such as the water that flows through rivers.
Yet demand for water is unrelenting, and billions of people still can’t easily access it. According to data from the World Health Organization in 2015, about 29% of the world’s population — 2.1 billion people — didn’t have an on-demand source of contaminant-free water.
The future isn’t looking brighter: By 2025, WHO expects half of the world’s population will live in areas where there isn’t sufficient clean water. 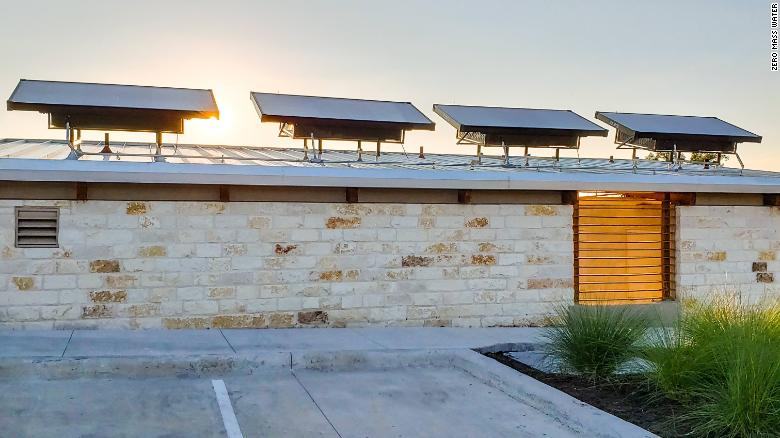 Zero Mass Water panels atop a building in a planned community in Austin, Texas.
Zero Mass Water and Watergen — a somewhat similar startup that recently unveiled a water-generating device for homes and offices — hope to help. If they can make their systems affordable and efficient enough to entice consumers and businesses, they may have a chance at alleviating an intractable problem.

How getting water from air works

Zero Mass Water’s panels capture sunlight to produce electricity and heat. The electricity powers components such as fans, which push air across a material the company engineered to absorb humidity. Then, when the material is exposed to sunlight, it respires water vapor. There’s a 30-liter reservoir inside each panel to hold the resulting water.
“We’re effectively distilling the air, if you want to make it sound cute,” Friesen said in an interview with CNN Business.
The panels also connect to a pump that can transport the water off the roof — say, to a water tap in your kitchen — for use.
So far, Friesen said, the panels, called Source, are being sold in more than 18 countries. The company has partnered with Aboriginal groups in Australia and sold it to high-end homeowners as well.
A couple customers have gone “off grid,” as Friesen calls it, using the water these panels produce for all their needs. And Zero Mass Water’s Scottsdale office has a vertical farm watered entirely by the system.
It typically yields just enough water for cooking and drinking, however — and depending on the weather and your household’s needs, perhaps much less. On average, a panel will produce 4 liters (about a gallon) per day, he said. That means a house with a standard two-panel setup would snag about 8 liters, or two gallons, of water in a day.
Watergen, which also generates water from the air around us, doesn’t use solar power. The company says it can produce a lot more water with a product called Genny, which is aimed at replacing water coolers in homes and offices.
Genny looks like a futuristic coffee maker and weighs 110 pounds. It will yield an average of five gallons per day when it’s available later this year, according to Watergen USA president Yehuda Kaploun. The company claims it will clean the air indoors, too. 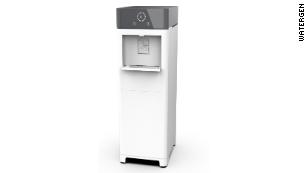 Watergen’s Genny will be available later this year.
The device works similarly to an air conditioner or dehumidifier. A fan sucks in air, which is then filtered and chilled to a dew point (a temperature at which water starts condensing) by Genny. The resulting water is filtered once again before it’s ready to drink, while the clean air is let out into the room.
Kaploun said Watergen has devices deriving water from the air in use around the world: 10 locations around Hanoi, Vietnam use Watergen systems to provide clean drinking water for residents, Kaploun said. In the US, it’s in some hospitals, and the Army uses it, too.
“The uses for this are everywhere you need water,” Kaploun said. “We hope to be used in a capacity to assist and create how water is delivered around the globe.”

A reality (and price) check

Since drinking water only comprises a tiny fraction of the water we use, Rutger Hofste, an associate data analyst at nonprofit research organization World Resources Institute, said devices from companies like Watergen and Zero Mass Water could be helpful for that alone.
Despite the promise of these systems for capturing water from the air, it’s hard to imagine them replacing traditional water sources. For one thing, they’re not yet producing anything close to the total amount of water that you likely use: If you’re in the US, that’s about 80 to 100 gallons of water per day. 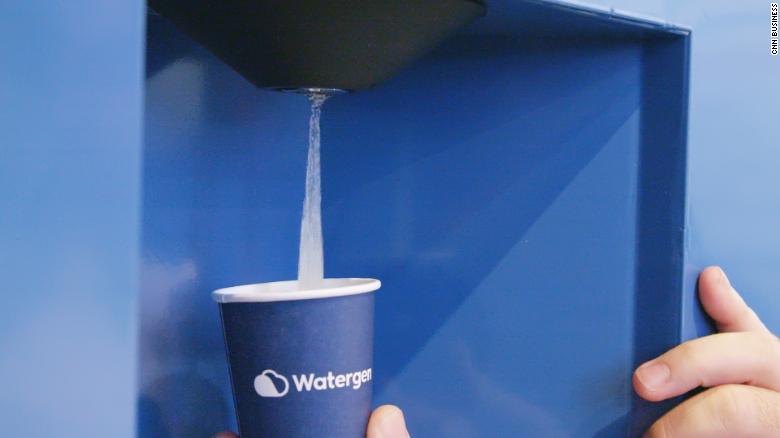 Water being dispensed from Watergen’s “Genny” device.
And they’re not cheap. Genny will cost about $1,500, plus the price of electricity to generate water. Kaploun said Genny generates a gallon of water per kilowatt hour. In the US, where consumers paid an average of 13 cents per kilowatt-hour for electricity in late 2018, that would be an additional $237.25 per year, assuming the device yielded its five-gallon-a-day average.
Zero Mass Water’s panels cost $2,000 apiece and are meant to last for 15 years. Since the average home would need two panels, it would cost $4,500 for the two panels and installation.
Even if these systems become cheaper and more efficient, there isn’t an endless supply of water in the atmosphere. US Geological Survey estimates that just 0.001% of the earth’s total water is in the atmosphere at a given time.
Another issue for these kinds of water-gathering devices: capturing water from air doesn’t work — or doesn’t work well — in certain weather and climates. If it’s freezing cold, for instance, Zero Mass Water’s Source system will go into a “hibernation mode,” and it doesn’t work as well in cloudy locations as it does in sunny ones.
Watergen, too, needs certain conditions to work well. Kaploun said Genny requires over 30% humidity and temperatures above 50 degrees for optimal performance.
“The main problem is that they usually only work in tropical environments, hot humid days, summertime,” said Majid Bahrami, a professor at Simon Fraser University who tests systems that condense water from the air in his lab.
That doesn’t mean Bahrami thinks they’ll fail, though. The market for generating usable water is huge, he said, and “all these technologies, in my opinion, are bits and pieces of a puzzle.”
He’s so intrigued by the possibilities that he’s also building a startup, called WaterGenics, to generate water from the air.