It’s hard to social-distance at home if you don’t have a home. 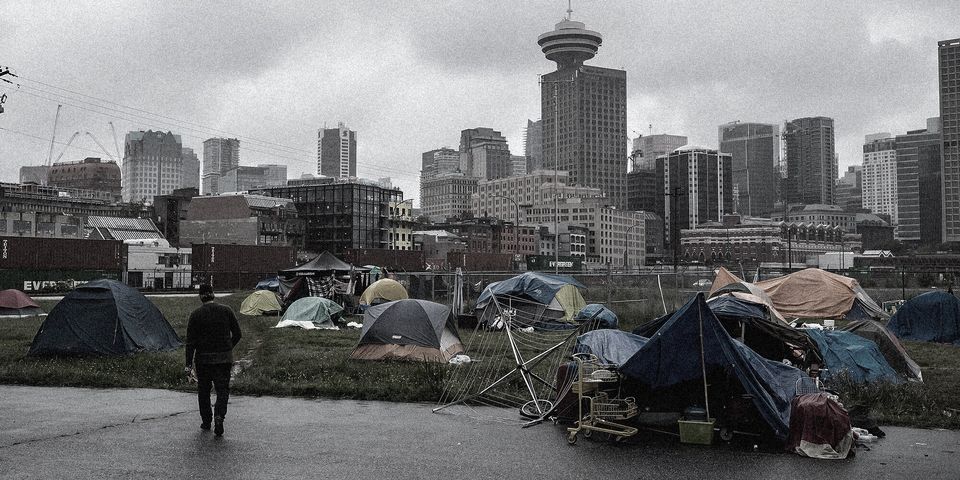 But Canadians experiencing homelessness don’t have that option, whether they’re camped out in streets or parks, or packed into crowded shelter spaces. At least 35,000 people experience homelessness every night in Canada. The pandemic has thrown that number into sharp relief, as the disease has threatened a population already at higher risk of mental and physical health complications.

Municipal, provincial and the federal governments have acted swiftly to address the increased risk posed to people experiencing homelessness, injecting funding into the non-profit sector and temporarily moving people into hotels and hockey arenas. In Montreal, masks are being distributed to the homeless population, the B.C, government gave out 3,500 smartphones to low-income people to help them access services closed by the pandemic, and Winnipeg has set up a testing site specifically for the homeless population. Homelessness advocates even launched a lawsuit against the City of Toronto to ensure proper social distancing in shelter spaces. The suit was settled in mid-May.

Canadian Alliance to End Homelessness president and CEO Tim Richter says these measures are all proof that governments are capable of acting on homelessness long-term.

“We can choose to move more aggressively and fix this problem, and that’s one of the things that these emergency measures have proven — that we can act rapidly and move people into housing if we choose,” he told HuffPost Canada.

Many experts argue that the policies put in place to abet homelessness during the pandemic could pave the way for a bigger institutional change, and even propel the push to end homelessness altogether.

They’ve been calling for it for years, but it might take a global pandemic to actually end homelessness in Canada.

That’s one of the things that these emergency measures have proven — that we can act rapidly and move people into housing if we choose.CAEH president and CEO Tim Richter

Vancouver’s Oppenheimer Park encampment — which at one point was occupied by upwards of 300 people and was one of the country’s largest encampments — was ordered cleared early in the pandemic to prevent spread of the disease. At least 265 people were moved into temporary shelter in empty hotels or other spaces by early May. Similar moves were made for long-standing encampments in Victoria as well.

Sarah Canham is an adjunct professor in gerontology at Simon Fraser University. She says prior to the pandemic, homelessness was largely talked about by the government and media in relation to social housing or general housing policy.

“Pre-COVID-19, when we heard about people experiencing homelessness, it was really at times when there would be new housing developments and there would be a sense of NIMBY-ism in our communities,” she said.

In our new world of physical distancing and personal protective equipment, jam-packed shelters and encampments are suddenly not just a housing issue, but also a public health crisis. And that means a lot more average Canadians, who otherwise might not think about homelessness issues, are suddenly keenly aware of the dangers posed by a pandemic in the current system.

“But now, people are noticing that it’s unsafe for people to be in overcrowded shelters where there aren’t medical staff on hand to support the outbreak of a pandemic,” Canham said. “It isn’t appropriate for people to be living on the street when businesses that they use on a daily basis for washing their hands on a regular basis or using the toilet facilities are no longer open.”

In April, several cases of COVID-19 were confirmed in Vancouver’s Downtown Eastside, where hundreds of people live in close proximity on the street, in camps like Oppenheimer or in crowded shelters. Early in the pandemic, officials were testing at three times the rate as the rest of Vancouver to catch any cases that arose.

Canham said that the “humanizing factor” of the pandemic’s effect on homeless people spurred fast action at various levels of government to address homelessness — actions academics and activists like her have been calling for for years.

“It’s shining a bit more of a light on the humanizing factor of some of the daily struggles that people have been encountering for decades here in Canada,” she said.

Some of these actions — such as housing people in empty hockey arenas or convention spaces — are temporary. When hotels saw business crash as borders closed and tourism dried up, an opportunity presented itself to temporarily house many of B.C.’s homeless population. Around 1,000 people between Vancouver and Victoria were offered the chance to relocate from encampments to these hotels.

But other provincial and federal actions are more permanent. The B.C. government purchased a hotel outside of Victoria to be converted into social housing and ease the congestion at a local encampment long-term. It will be operated by Our Place Society, a local organization that already offers support to the homeless, in partnership with B.C. Housing to provide shelter, meals and harm-reduction services related to drug use. The hotel’s pub is being converted into a safe consumption site, and residents will have access to regular wellness checks — and even the chance to bring their dogs and other personal items into their new living accommodations.

“We intend to serve this vulnerable population with dignity,” Grant McKenzie, Our Place spokesperson, said in a statement.

In early April, Trudeau’s government also announced $157 million in funding to shelters and other homeless relief efforts, with specific money going to women’s and Indigenous-focused services.

“It’s not just an issue of giving a safe place for people to escape violence or to give them shelter when they don’t have a home,” Trudeau said at the time. “It’s really an issue of protecting everyone in our society against COVID-19. That includes the most vulnerable.”

Prompted by these early moves to address COVID-19 and homelessness, advocates have come forward with calls to action at the municipal, provincial and federal levels to address homelessness long-term, arguing that this isn’t something that can be fixed by “band-aid” solutions.

One such call was released April 27 by a collective of 40 housing advocates and researchers in association with the University of British Columbia’s Housing Research Collective, chaired by professor Penny Gurstein.

The document’s authors outline eight key areas the federal government can continue to address homelessness as part of the post-COVID-19 economic stimulus package.

“We are in crisis mode as individuals and organizations, but we also are looking to a better future. We write to suggest ways to get the economy moving again, through investing in infrastructure that can help reduce inequalities, improve the social determinants of health, and uphold human rights,” they note in the introduction.

Gurstein told HuffPost that governments must start planning to maintain these supports after the crisis is over.

“It would be unconscionable for people, once the pandemic’s worst effects are over, to just say ‘well, you’re on your own again,’” she said.

Gurstein said housing has been a significant part of economic recovery plans dating back to the second World War. And it can’t just be affordable housing for home-owners, but renters and the homeless too.

“You have to be really thinking of how do you actually do a stimulus package that addresses housing for people that are not in the market. That would be non-market housing,” she said.

Alongside the UBC call to action, the Canadian Alliance to End Homelessness (CAEH) has also launched a campaign called “Recovery For All,” advocating for housing as part of any coronavirus recovery plan.