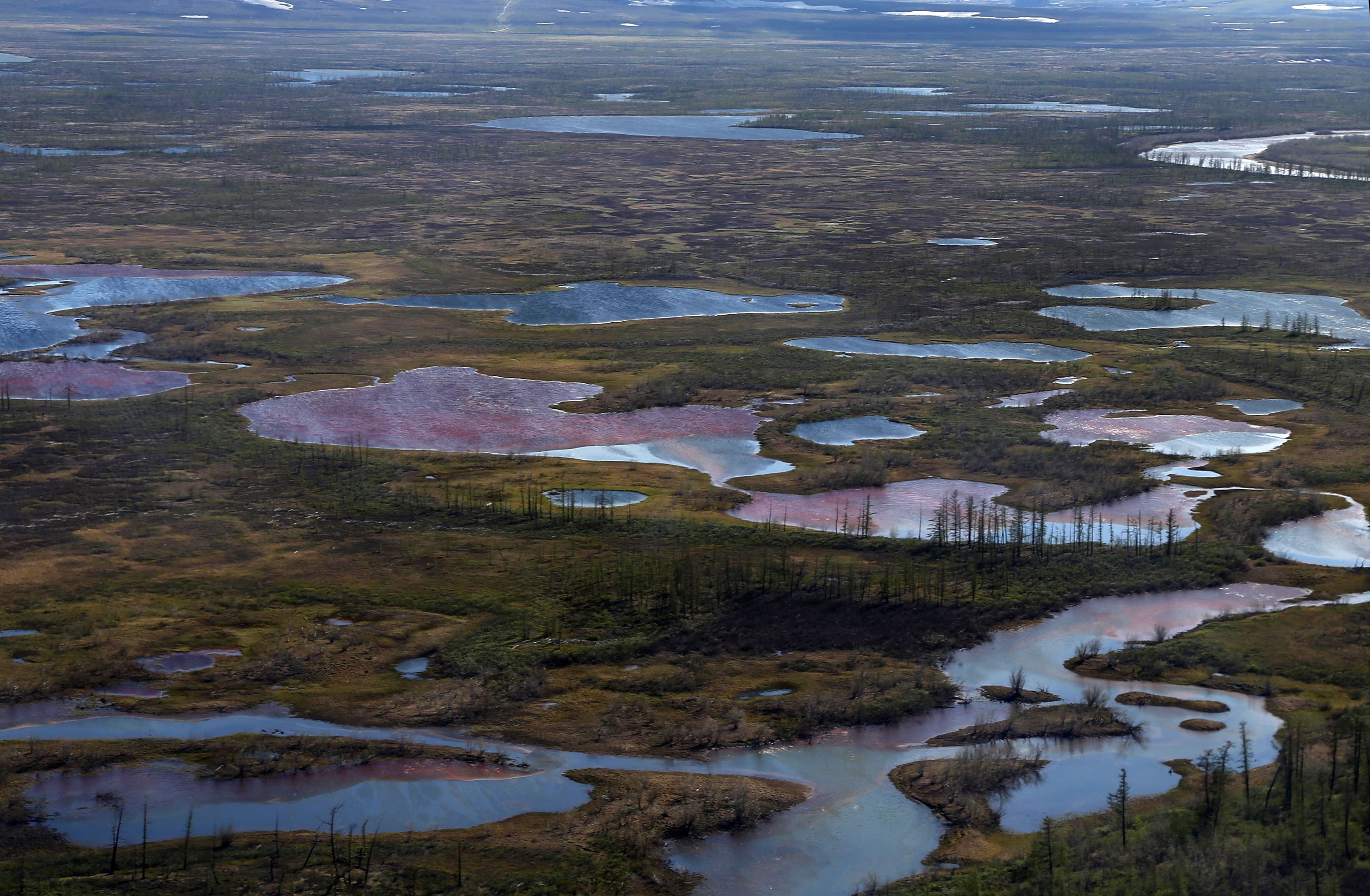 In Siberia in late May, thawing permafrost caused an oil-storage tank to collapse, leading to the largest oil spill ever to occur in the Russian Arctic.Photograph by Irina Yarinskaya / AFP / Getty

The remote Siberian town of Verkhoyansk, three thousand miles east of Moscow and six miles north of the Arctic Circle, has long held the record, with another Siberian town, for the coldest inhabited place in the world. The record was set in 1892, when the temperature dropped to ninety below zero Fahrenheit, although these days winter temperatures are noticeably milder, hovering around fifty below. Last Saturday, Verkhoyansk claimed a new record: the hottest temperature ever recorded in the Arctic, with an observation of 100.4 degrees Fahrenheit—the same temperature was recorded that day in Las Vegas. Miami has only hit a hundred degrees once since 1896. “This has been an unusually hot spring in Siberia,” Randy Cerveny, the World Meteorological Organization’s rapporteur of weather and climate extremes, said. “The coinciding lack of underlying snow in the region, combined with over-all global temperature increases, undoubtedly helped play a critical role in causing this extreme.” Siberia, in other words, is in the midst of an astonishing and historic heat wave.

Anthropogenic climate change is causing the Arctic to heat up twice as fast as the rest of the planet. Climate models had predicted this phenomenon, known as Arctic amplification, but they did not predict how fast the warming would occur. Although Verkhoyansk has seen hot temperatures in the past, Saturday’s 100.4-degree record follows a wildly warm year across the region. Since December, temperatures in western Siberia have been eighteen degrees above normal. Since January, the mean temperature across Siberia has been at least 5.4 degrees Fahrenheit above the long-term average. As the meteorologist Jeff Berardelli reported for CBS, the heat that has fallen on Russia in 2020 “is so remarkable that it matches what’s projected to be normal by the year 2100, if current trends in heat-trapping carbon emissions continue.” By April, owing to the heat, wildfires across the region were larger and more numerous than they were at the same time last year, when the Russian government eventually had to send military aircrafts to battle vast blazes. The scale of the current wildfires—with towering plumes of smoke visible for thousands of miles on satellite images—suggest that this summer could be worse. Because of the coronavirus pandemic, they will also be more complicated to fight.

Toward the end of May, as the sun stopped dropping below the horizon, the heat continued. In the town of Khatanga, far north of the Arctic Circle, the temperature hit seventy-eight degrees Fahrenheit, or forty-six degrees above normal, topping the previous record by twenty-four degrees. The heat and fires are also hastening the dissolution of Siberian permafrost, perennially frozen ground that, when thawed, unleashes more greenhouse gases and dramatically destabilizes the land, with grave consequences. On May 29th, outside Norilsk, the northernmost city in the world, the thawing ground buckled, causing an oil-storage tank to collapse and spew more than a hundred and fifty thousand barrels, or twenty-one thousand tons, of diesel fuel into the Ambarnaya River. The spill was the largest to ever occur in the Russian Arctic.

Norilsk, which was constructed in the nineteen-thirties by prisoners of a nearby Gulag camp, Norillag, was already one of the most polluted places in the world. Most of its hundred and seventy-seven thousand residents work for Norilsk Nickel, the company that owns the collapsed oil tank. Its massive mining and metallurgy complex alone is worth two per cent of Russia’s G.D.P. The city contributes a fifth of the global nickel supply and nearly half of the world’s palladium, a metal used to make catalytic converters. Factories billow clouds of sulfur dioxide incessantly, and the resulting acid rain has turned the city and its surroundings into an industrial wasteland, with no green space or parks, just dirt and dead trees. Life expectancy in Norilsk is twenty years shorter than it is in the United States. The last time the town made the news, before the oil spill, was exactly a year ago, when an emaciated polar bear, a refugee from its melting home, was photographed rummaging through the city dump.

Norilsk Nickel’s executives have tried to skirt responsibility for the oil spill by blaming the thawing permafrost—or, as a press release stated, “a sudden sinking of the storage tank’s pillars, which served accident-free for more than thirty years.” But the thaw did not happen unexpectedly, out of nowhere. Buildings in Norilsk have collapsed because of the sagging ground. Russian and international experts have been aware of the risks that rapidly thawing permafrost represents for more than a decade. A 2017 report from an Arctic Council working group said that “communities and infrastructure built on frozen soils are significantly affected by thawing permafrost, one of the most economically costly impacts of climate change in the Arctic.” They found that thawing permafrost could contaminate freshwater, when previously frozen industrial and municipal waste is released, and that the bearing capacity of building foundations has declined by forty to fifty per cent in some Siberian settlements since the nineteen-sixties. They also noted that “the vast Bovanenkovo gas field in western Siberia has seen a recent increase in landslides related to thawing permafrost.” The authors of a 2018 paper, published in Nature Communications, found that “45% of the hydrocarbon extraction fields in the Russian Arctic are in regions where thaw-related ground instability can cause severe damage to the built environment.” The paper continued, “Alarmingly, these figures are not reduced substantially even if the climate change targets of the Paris Agreement are reached.”

Putin, however, is not known for his environmentalism. His anger and concern about the Norilsk oil spill might have more to do with how much it exposed his government, making visible the overwhelming economic and environmental risks facing oil, gas, and mineral development in Siberia if temperatures there continue to rise. “The Russians’ continued development of oil and gas in the central Arctic region is their economic future,” Huebert said. “The Russians’ interest in all this is to keep the oil flowing, whatever it takes.” But sixty per cent of Russia is permafrost. Although much of the newest oil and gas infrastructure in the Far North has been engineered with climate change in mind, temperatures are currently on track to far exceed projections. Perhaps that is why the Kremlin did, finally, officially ratify the Paris accord last October. And yet the Kremlin continues to incentivize increased oil and gas development in eastern Siberia and the Arctic, which will lead to more greenhouse-gas emissions, which will continue speeding up the permafrost thaw.

The fallout of such policies will most immediately affect the health and survival of local communities. By 2050, according to the Nature Communications report, the loss of ground stability will affect at least a third of the infrastructure in the Arctic’s permafrost zone, and the lives of nearly four million people. But these policies also have dire global implications. With its abundant plant life, the Arctic, for tens of thousands of years, was a carbon sink for the rest of the planet. Permafrost across the Arctic and boreal regions contains between 1.46 trillion and 1.6 trillion tons of organic carbon, which is almost twice the amount present in the atmosphere today. This carbon includes hidden pouches of ancient methane, plus long-frozen organic matter (akin to a frozen compost pile) that can release carbon and methane once microbial life awakens in the warming ground. With rising temperatures, researchers have recently found, more and more of this carbon is being released, turning the Arctic into a carbon source. Sue Natali, a scientist at the Woods Hole Research Center, told me that, even though climate change has caused an increase in summertime Arctic plant life, which absorbs carbon dioxide, it is not enough. The warmth also increases the microbial decomposition of soil and plants in the winter, resulting in a higher annual release of carbon. “While the plants may have been ramping up,” she said, “in the wintertime, the microbes are keeping pace and actually exceeding them.” This cycle creates a terrifying feedback loop: more warming releases more carbon from the permafrost, which creates more warming. A study that Natali co-authored last fall projected that, if business continues as usual (in terms of emissions), by 2100, the Arctic could emit forty-one per cent more carbon each winter than it does now. That amount equals the emissions from two hundred and sixty-six million cars, nearly as many as are currently on the road in the United States.

The permafrost found in the area surrounding Verkhoyansk is some of the deepest and oldest in the world, descending as much as five thousand feet. Closer to the surface, a type of ice-rich permafrost known as yedoma is particularly vulnerable to rapid thaws. The result is thermokarst, the strange and sometimes shocking topography that forms as the land slides, sags, and sinks. Mysterious sinkholes suddenly appear, drunken forests fall, and hillocks destroy farmland. One of Russia’s most extreme examples of thermokarst, known as the Batagay megaslump, is a two-hundred-and-eighty-foot-deep, half-mile-wide depression, situated just outside Verkhoyansk. It first began forming as a small gully in the nineteen-sixties, because of deforestation, but has grown significantly in recent years, exposing the remains of ancient creatures, including musk ox, a cave lion, a Pleistocene wolf, a woolly mammoth, and an almost perfectly preserved, forty-thousand-year-old foal. While exciting for scientists and tusk hunters, the megaslump is another sign of the challenges that people in the region—home to several indigenous cultures and languages, including Sakha, Evenki, Even, and others—face if they want to remain on their land. Some locals call it a gateway to the underworld, which seems appropriate, as the slump releases more and more methane. Researchers who have been to the slump say that they can hear the thuds, booms, and cracks of the thawing ice. This summer, the sound will be especially loud.

Carolyn Kormann is a staff writer at The New Yorker.
More:

It is evidence we are pushing climate to a homeostasis similar to a brief warming period in the Pleistocene or maybe even the great warming and high CO_2 episode of the Miocene. This will not mean the end of life  on Earth, but it will put severe stress on ecosystems and probably pressure on the human condition. Ecosystems are quickly finding themselves in climates they are not adapted to, and quick migration
north is not possible.

These events in the arctic indicate the melting of permafrost is ongoing, and it appears we are now in the run-away circumstance. Even if
we intervene we will not be able to stop this. This is at least not
without some geo-engineering interventions that are themselves
problematic. As the saying goes, it appears our goose is cooked. The
impact on us, whether large or small, disastrous or adaptable, is coming.