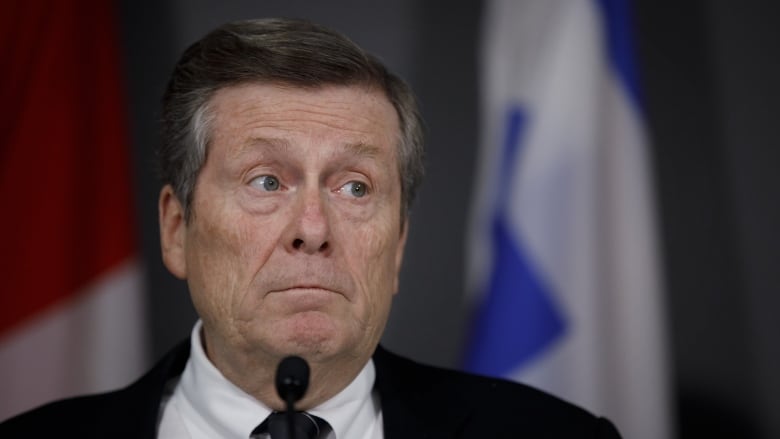 Toronto Mayor John Tory is calling for the creation of a new non-police response team for calls that do not involve weapons or violence. (Cole Burston/The Canadian Press)

Toronto Mayor John Tory is calling for numerous changes to the city’s policing system, including the creation of a new non-police response team for calls that do not involve weapons or violence.

Tory revealed the list of proposed reforms Thursday morning as part of a motion he will take to council next week.

“In recent weeks, here in Toronto and around the world, people have been raising their voices and calling for an end to racism generally, to anti-Indigenous and anti-Black racism, and to racism against marginalized communities,” Tory writes in the motion.

“We must fix that model by changing the way policing is done in order to stamp out systemic racism within our police service and to rethink, in some cases, whether police are the right community response at all.”

The motion also calls for increased funding of programs that support Toronto’s Indigenous, Black and marginalized communities, as well as others that provide mental health supports.

Tory’s recommendations — which you can read here — do not call for a defunding of the service, a demand that has become a rallying cry among concerned residents in recent weeks.

Tory said he instead favours the idea of “detasking” police rather than slashing the budget.

Toronto police have been under increased scrutiny in recent weeks amid large protests and calls to defund the force.

The Toronto protests were ignited by the murder of George Floyd by a police officer in Minneapolis, but also the death of Toronto woman Regis Korchinski-Paquet, who fell from her balcony after police responded to a call at her home in May.

Police in nearby Peel region are also facing scrutiny after the death of Ejaz Choudry, who was fatally shot by police last week while he was experiencing a mental health crisis.

“Finally, the world’s spotlight is on policing and people do not like what they see,” said deputy mayor Michael Thompson.

“I think what we are about to do could be the model right across the world.”

People leading the charge for substantial police reform dismissed Tory’s proposals as unambitious and said they were destined to be watered down.

“What we’ve heard today falls very short of what communities are expecting,” said Syrus Marcus Ware of Black Lives Matter Toronto, which is calling for a 50 per cent reduction of the police budget, which currently stands at about $1.2 billion annually.

“When we talk about defunding the police, we’re talking about investing in our communities,” Ware said.

A group of more than 50 doctors also published a letter sent to city hall Thursday, in which they described policing as a “public health crisis.” The doctors support Black Lives Matter’s call to defund police by 50 per cent, with similar hopes that the money could be directed to more helpful programs.

While no city councillors have voiced support for such a drastic reduction, there is a proposal to cut the service’s budget by 10 per cent. That motion will also be debated by council during its next meeting on June 29.

Coun. Kristyn Wong-Tam, who is supporting the 10 per cent reduction, said Tory’s plan “is not good enough” because it does not specifically call for a budget reduction.

She said on Twitter that cutting funding for police is “at the core of the movement to reform policing.”

The Centre for Addiction and Mental Health, Canada’s largest mental health hospital, has also called for police to stop responding to incidents involving people in crisis.

Tory acknowledged the growing public appetite for major reform and cited the “tens of thousands” of residents who have written emails and made phone calls in demand of change.

“I know these calls stem from real concerns,” he said.

While Tory’s motion resists calls to deliberately defund the service or otherwise slash its budget, he argued that the proposed changes will drive budget reductions.

“I am confident it will lead to a reduction in the Toronto Police Service budget,” he says.

“We want a safe city, but we also want everyone to feel safe in our city.”

Tory’s motion also includes changes that would have to made by the provincial government, including a proposal to “review and overhaul” regulations governing police equipment and use of force.

It suggests new regulations to emphasize de-escalation techniques, and also calls for Ontario to examine “alternative models” around the use of deadly force, though specific ideas are not listed.

Premier Doug Ford said that he would entertain the proposals, but not without consulting police.

Ford reiterated during a Thursday news conference that he is staunchly opposed to defunding the police. On the issue of responding to non-violent mental health calls, Ford suggested officers receive additional training rather than relinquish that responsibility.