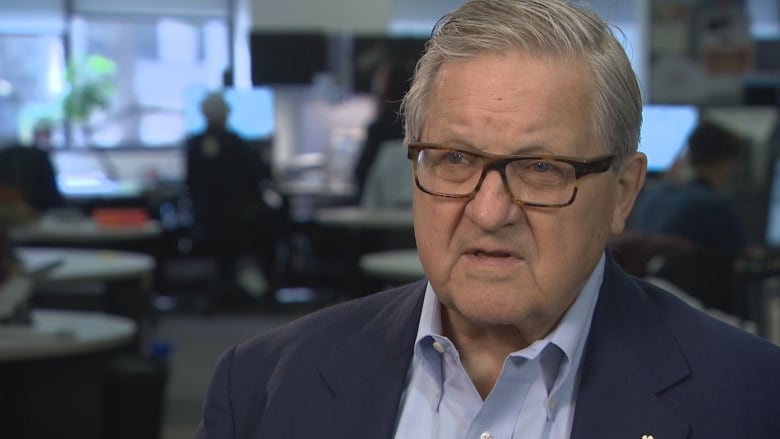 Former foreign affairs minister Lloyd Axworthy is one of 19 high-profile Canadians who signed a letter to Prime Minister Justin Trudeau that says the government of Canada has the legal right to intervene to free Meng Wanzhou and end the extradition trial that could send her to the U.S. (CBC)

Axworthy is one of 19 prominent former politicians and diplomats from across the political spectrum who have signed a letter that argues releasing Meng Wangzhou could free Michael Kovrig and Michael Spavor, the two Canadians who were detained in China shortly after Meng’s arrest. The Huawei executive is under house arrest in Vancouver as she fights extradition to the United States, which requested her arrest.

CBC News obtained a copy of the letter Wednesday.

“We’ve got two Canadians sitting in a jail in a very sordid situation and facing serious legal charges, so I think what we’re saying is that the rationale being used by the government to say that they have to retain the integrity of the extradition process doesn’t hold all that much water,” he said.

Justice Minister David Lametti can request an end to an extradition case and should do so in this matter, Axworthy said.

He said Thursday that while he’s sympathetic to Spavor and Kovrig’s “terrible and trying” situation, bowing down to pressure from China would set a bad precedent and potentially put other Canadians in danger.

“We will continue to remain steadfast and strong and say very clearly in our actions and in our words that randomly arresting Canadians doesn’t give you leverage over the government of Canada anywhere in the world,” he said.

Trudeau said the government is doing everything it can to bring Spavor and Kovrig home, but he refuses to give in to political pressure.

Axworthy said the purpose of the letter was to prompt some debate on the issue and ask the Canadian government to be more assertive.