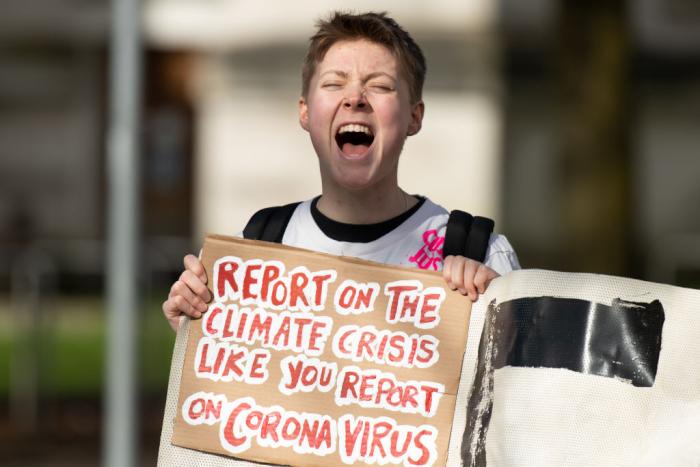 There’s a famous quote of oft-disputed origin that frequently gets attributed to Winston Churchill that goes: ‘Never let a good crisis go to waste.’ The quote is also often applied to the doctrines of hard-right economic shock therapy which were famously espoused by economist and modern-day originator of neoliberalism Milton Friedman and his ideological bedmates at the University Chicago. These doctrines are the ones that were infamously tested out in the field by the savage economic war waged on Chile by Augusto Pinochet and the CIA following the coup in 1973. The implications of the phrase when ascribed to either Churchill or the Friedmanite Chicago Boys are clear: In times of crisis, use the confusion and the disarray to reshape society as you see fit; while the people are panicked, let the powerful jerk the needle to the right. As Naomi Klein described it in her seminal 2007 book, ‘The Shock Doctrine: The Rise of Disaster Capitalism’:

It was in 1982 that Milton Friedman wrote the highly influential passage that best summarizes the shock doctrine: ‘Only a crisis – actual or perceived – produces real change. When that crisis occurs, the actions that are taken depend on the ideas that are lying around. That, I believe, is our basic function: to develop alternatives to existing policies, to keep them alive and available until the politically impossible becomes politically inevitable.’ It was to become a kind of mantra for his movement in the new democratic era. Allan Meltzer elaborated on the philosophy: ‘Ideas are alternatives waiting on a crisis to serve as the catalyst of change. Friedman’s model of influence was to legitimize ideas, to make them bearable, and worth trying when the opportunity comes.”

One of the most striking modern-day examples of the violence in which American Friedmanite neoliberalism imposes itself upon the world was, of course, the destruction of Iraq that started under George W. Bush. Klein describes this succinctly in ‘The Shock Doctrine’, painting a picture of the state of the occupation post-invasion:

Iraq under Bremer was the logical conclusion of Chicago School theory: a public sector reduced to a minimal number of employees, mostly contract workers, living in a Halliburton city state, tasked with signing corporate-friendly laws drafted by KPMG and handing out duffle bags of cash to Western contractors protected by mercenary soldiers, themselves shielded by full legal immunity.

‘Never let a good crisis go to waste,’ has another possible origin however. In his 1971 book ‘Rules for Radicals: A Pragmatic Primer for Realistic Radicals’, community activist and political theorist Saul D. Alinsky wrote that, ‘in the arena of action, a threat or a crisis becomes almost a precondition to communication.’ Alinsky’s point came at things from entirely the opposite side of the spectrum: When there is a crack in the armour of the status quo—a disruption to the corrupt, sleepy norms—use it to shatter that status quo, and attempt to build a better world by uniting grassroots campaigns into a powerful unit. In other words, a strikingly opposing worldview to the likes of Churchill and Friedman. Others picture yet another figure when they think of the crisis quote: one Rahm Emmanuel, former Mayor of Chicago, then-President Obama’s Chief of Staff, and perennial burst pustule on the face of this green Earth. Emmanuel, naturally aligning himself with the high priests of neoliberalism who hailed from his hometown, is said to have expressed a ‘Never let a good crisis go to waste,’ sentiment in response to the great crash of 2007/8. The more classically inclined point towards another likely candidate as the source of the saying: Niccolò Machiavelli himself, who said: ‘Never waste the opportunity offered by a good crisis.’

In terms of pure chronology, then, it would seem pretty clear that Machiavelli could most likely lay claim to being the originator of the quote. Of course, just as interesting as whatever the actual origin of a saying might be is the way the saying is taken and morphed and amplified, and by whom, down the ages.

As the global lockdowns from Covid-19 begin to be eased—in many places directly against the advice of science and common sense—environmentalists have been sounding the alarm, and pleading for a divergence from the path of madness. Covid-19 is the biggest, most structure-shaking crisis the world has seen in a lifetime. Within the space of a few weeks, entire systems previously taken for granted were dismantled, ground to a halt, or were reconfigured. Air travel came to a virtual standstill. Capitalist factories and chains of production and distribution were repurposed to serve the greater human good by producing hand sanitiser or PPE. And, most tellingly, CO2 emissions plummeted by a global average of 17% in April as compared to 2019. That kind of paradigm-stalling judder has the potential to be seized on by forces both malign, and progressive. Scientists and environmentalists have been issuing stark warnings against not using the opportunity afforded by this crisis to dramatically reconfigure our approach to global energy production and carbon emission. They have been stressing the need for a green recovery, and highlighting the madness of rebounding back to business as usual. A few days ago, Fatih Birol, executive director of the International Energy Agency, told The Guardian:

The next three years will determine the course of the next 30 years and beyond. […] If we do not [take action] we will surely see a rebound in emissions. If emissions rebound, it is very difficult to see how they will be brought down in future. This is why we are urging governments to have sustainable recovery packages.

The IEA’s own calculations show that governments are set to spend about $9tn in the next few months on rescuing their economies from the coronavirus crisis. If this is not done in a dramatically greener, more sustainable way going forward than has been the case up until before the crisis, then we are likely past the point of no return. The three years timescale to avert catastrophe given above may also seem like a dramatic tightening of the noose from the oft-touted figure of a decade or so, but in fact in the same Guardian report the IEA representative refines that figure to a more realistic, and far more depressing, six months. According to a report in Media Lens, a UK-based corporate media watchdog:

[T]he crucial window for action is likely much shorter than that. And it is not just the ‘usual suspects’ of Greens and wild-eyed radicals who claim so. According to Fatih Birol, executive director of the International Energy Agency, the world has just six months to avert climate crisis. This is the timescale required to ‘prevent a post-lockdown rebound in greenhouse gas emissions that would overwhelm efforts to stave off climate catastrophe’.