Hotter than normal temperatures are expected across almost all of the United States into September, government researchers said. 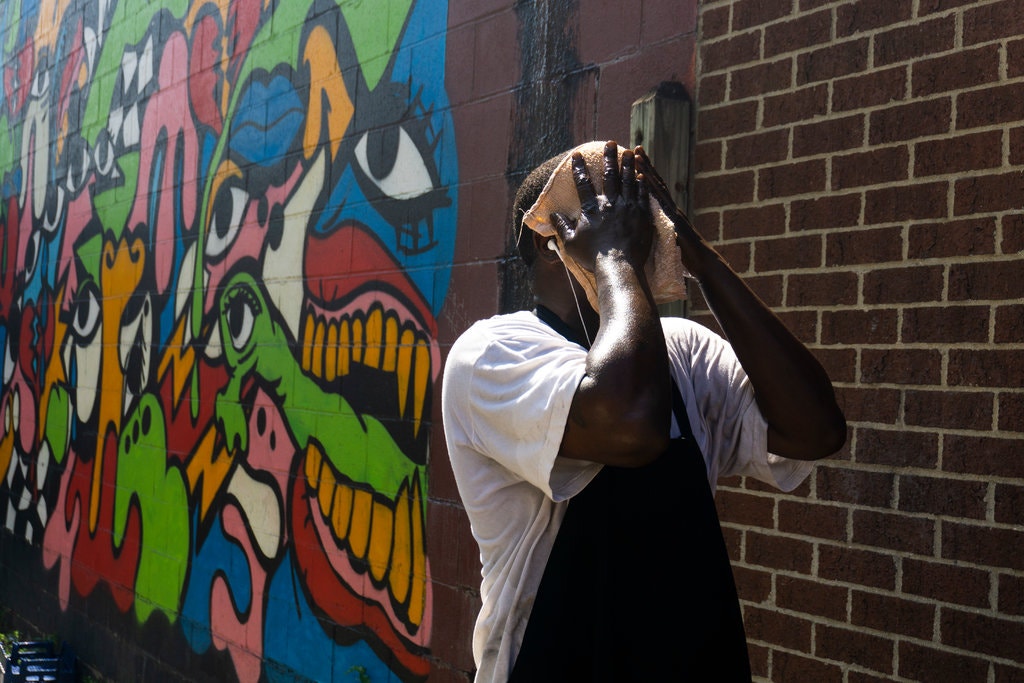 Antjuan Durand, a chef, tried to cool off while grilling at Bert’s Marketplace in Detroit, Mich., last summer, in front of a mural by artist Sheefy McFly.Credit…Brittany Greeson for The New York Times

Following a May that tied for the hottest on record, the United States is heading into a potentially blistering summer, with hotter than normal temperatures expected across almost the entire country into September, government researchers said on Thursday.

Dan Collins, a meteorologist with the National Oceanic and Atmospheric Administration’s Climate Prediction Center, said that for July, August and September across almost the entire United States “the average temperatures are likely to be above normal,” especially in the West and Northeast.

The trends over the last few decades are clear. The most recent figures are in line with a general warming trend: Each decade since the 1960s has been warmer than the one before, and the five hottest years occurred in the second half of the last decade.

High temperatures were likeliest in the Mid-Atlantic states, Northeast and New England, and across much of the West, Rocky Mountains and Southwest. Only a small part of the Midwest, centered around Missouri, has an equal chance of lower-than-normal temperatures, according to an analysis by the Climate Prediction Center.

That warmth will likely mean that drought conditions, currently experienced by nearly one-fourth of the country, will persist through the summer, NOAA scientists said.

Globally, last month was tied with 2016 for the hottest May on record, with average land and sea temperatures that were 0.95 degrees Celsius, or 1.71 degrees Fahrenheit, above the average dating back more than a century.

But May was also cooler than average across much of the Plains and the East Coast, said Karin Gleason, a NOAA climatologist.

It is now virtually certain that globally, 2020 will be one of the five hottest years on record, she said. But it’s less likely that 2020 will eclipse 2016 as the hottest ever. NOAA now estimates there is about a 50 percent chance that 2020 will be a record breaker, down from about 75 percent a month ago.

Gavin A. Schmidt, the director the Goddard Institute for Space Studies at NASA, said that the new information is in line with what is known about climate change: “There is a long-term trend in temperatures driven by human activity that is going to lead to more and more records being broken,” he said. “Not every month, not every year — but this will keep happening as long as we continue to emit carbon dioxide.”

It’s always hot in summer. How is this any different?

Yes, summer has always been the sweltering season. But like all the months of the year, summer months have been getting hotter, a consequence of human-caused emissions of heat-trapping gases.

July is the hottest month of all on a global average (even though it is winter in the Southern Hemisphere). July 2019 was the hottest ever, with an average temperature that was 1.7 degrees Fahrenheit (about 1 degree Celsius) higher than the 20th century average for the month.

Could last July have been an anomaly, an extreme swing in a variable climate? No — it’s the continuation of a trend. The five hottest Julys have occurred in the last five years, and nine of the 10 hottest have occurred since 2005.

So I’ll swelter during the day. But I’ll get some relief at night, right?

Yes, the air will cool after dark, when the Earth’s surface is no longer absorbing sunlight and giving off heat as a result. But on average you will not get as much relief as you used to because even the nights are warmer now, and they are warming faster than days.

That somehow seems contradictory, doesn’t it? But scientists have offered several explanations.

For a given geographical area or season, changes in nighttime cloud cover may play a role (more clouds trap more heat), as could changes in precipitation or the moisture content of soils.

But there is another explanation that applies globally, involving the boundary layer, the lowest part of the atmosphere that is directly affected by the surface. During the day this layer can be a half-mile thick or more, but at night it becomes much thinner, about 500 feet or less. With a much lower volume of air, the boundary layer at night warms more from the heat trapped by greenhouse gases.

I live in a city, and the summer heat always seems worse for me than in the suburbs. Why is that?

No doubt you appreciate the vibrancy of your city, with its densely packed apartments and houses and its many shops, restaurants, theaters and other cultural venues, all easily accessible through a network of streets.

But to make way for all those buildings and streets, open space was destroyed. Trees and other vegetation disappeared. The few remaining vacant lots were gradually paved over to become parking lots.

And those buildings and streets absorb more of the sun’s energy and radiate more heat than open spaces do. Densely packed, they also can block cooling winds. The trees and shrubs that disappeared? They used to provide shade and a cooling effect through evapotranspiration. All of that, plus the waste heat that results from transportation, industry and cooling, because engines and other energy-consuming equipment are not completely efficient, makes cities hotter.

Even within a city, research shows that temperatures on a hot summer day can vary as much as 20 degrees across different areas, with poor or minority neighborhoods often bearing the brunt of that heat.

All those structures and streets can make the effect worse at night as well. Think of them like a battery that’s being charged up all day, absorbing energy in the form of sunlight and heating up. At night this “battery” slowly discharges, releasing its heat, keeping the city even warmer than surrounding areas.

Henry Fountain specializes in the science of climate change and its impacts. He has been writing about science for The Times for more than 20 years and has traveled to the Arctic and Antarctica. @henryfountain • Facebook

John Schwartz is a reporter on the climate desk. In nearly two decades at The Times, he has also covered science, law and technology. @jswatz • Facebook