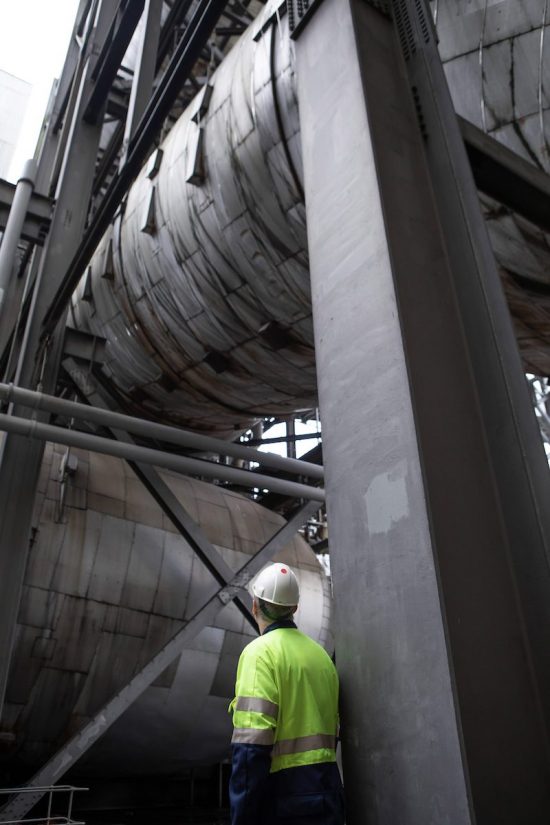 An engineer looks up at flue gas desulphurization unit at Drax Power Station. The massive pipe above him could transport more than 90% of the carbon dioxide captured with BECCS while power is being generated. Photo courtesy Drax.

The pilot will test MHI’s carbon capture technology – marking another step on Drax’s journey towards achieving its world-leading ambition to be a carbon negative company by 2030.

MHI’s 12-month pilot will capture around 300kg of CO2 a day for the purpose of confirming its technology’s suitability for use with biomass flue gases at Drax.

“Our plans to develop ground-breaking BECCS at the power station in North Yorkshire will help to boost the UK’s economy following the COVID crisis and support the development of a zero carbon industrial cluster in the Humber region – delivering clean growth and protecting thousands of jobs.

We’re very pleased to be working with Mitsubishi Heavy Industries on this exciting pilot which will further our understanding of the potential for deploying BECCS at scale at Drax – taking us closer to achieving our world-leading ambition to be a carbon negative company by 2030.”

Two of MHI’s proprietary solvents will be tested, one of which — KS-1TM Solvent — is already being used at 13 commercial plants delivered by MHI, including Petra Nova in Texas, the world’s largest post combustion carbon capture facility, capturing 1.4 million tonnes of CO2 a year. The other is the newly developed KS-21TM Solvent, designed to achieve significant performance improvements and cost savings.

“We are very proud to be a part of the BECCS pilot project with Drax. We firmly believe that our carbon capture technology would be able to contribute to the UK’s zero carbon targets in a material way.”

Implementing BECCS at Drax could deliver 16 million tonnes of negative emissions a year – a third of the negative emissions the UK needs from BECCS to reach its zero carbon targets by 2050 and anchor a zero carbon industrial cluster in the Humber region, delivering clean growth whilst protecting 55,000 jobs.

Bloomberg) — Norway’s plan for a full-scale carbon capture and storage project could end up a financial disaster, according to a new report that includes an increased cost estimate for the venture.

The likely cost of building and operating the project over 10 years — most of which would be funded by the government — could be as much as 25 billion kroner ($2.6 billion), according to an independent report published by the government on Thursday. That’s 8 billion-kroner more than estimated by a previous study, although that only covered five years of operations.

Lawmakers earlier this year pushed the government to prepare the ground for an investment decision this autumn, but the latest report is likely to give some politicians reason to think again. Norway, western Europe’s biggest oil producer, has been reluctant to throw money at costly carbon capture and storage technology after an earlier attempt, dubbed the country’s “moon landing,” failed.

“The measure is considered as costly,” the ministry said in a statement accompanying the report. “There is great uncertainty about the benefits, and the measure could prove to be considerably unprofitable.”

The project under consideration involves capturing carbon dioxide from one or two industrial sites in Norway, transporting it on ships and then piping it out to the North Sea for underground storage. For it to be profitable, carbon dioxide emissions would need to cost 10 times as much as they do today, according to the latest report.

The new study, written by Atkins and Oslo Economics, recommends picking only one industrial site, a cement factory in Brevik, south of Oslo, rather than two, in an attempt to reduce costs, it said. That would leave out Fortum Oyj’s waste-to-energy plant in the Norwegian capital.

Norway’s minority government has yet to make a decision, Petroleum and Energy Minister Tina Bru said. It will present its recommendation by October. If parliament gives the plan the green light, the Norwegian state would cover about 80% of the cost while companies including Equinor ASA, Total SA and Royal Dutch Shell Plc, which would run the transport and storage side, would fund the rest.

A series of European industrial companies including Air Liquide SA and ArcelorMittal SA signed non-biding agreements with Equinor in September to join the CCS project at a later stage by providing CO2 to be stored offshore Norway. Even then, the Norwegian government said it would need more international and industrial support to go ahead with the project.