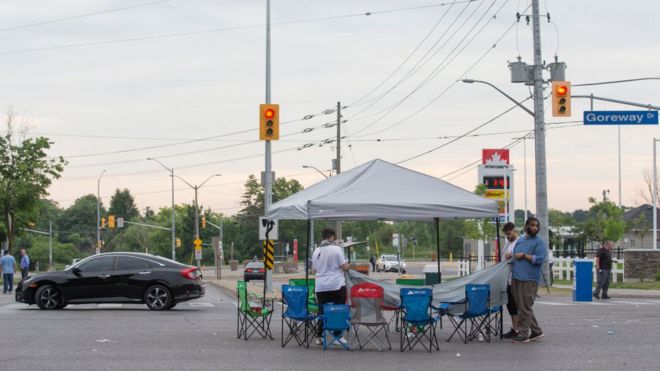 A protest near where Ejaz Choudry was shot by police has shut down an intersection. Getty Images

Ejaz Choudry, 62, was killed over the weekend when police responded to a call to “check on the well-being of a man”.

In May, Toronto woman Regis Korchinski-Paquet, 29, fell from a balcony and died after police arrived to help her.

What happened to Mr Choudry?

In a press conference, Mr Choudry’s family said he suffered from schizophrenia, was paranoid and afraid of police. His nephew Khizar Shahzad says Mr Choudry’s daughter had called for a non-emergency ambulance on Saturday because her father was having an “episode”. Once paramedics arrived at his apartment in Malton, outside of Toronto, Mr Shahzad said they saw he had a knife and called the police.

Family recalled pleading with police to be allowed to go with them into the building to make Mr Choudry more comfortable, explaining that he was likely to be paranoid.

In a news release, the SIU said Peel Regional Police arrived at 5pm local time, and that they communicated with Mr Choudry, who was barricaded in his apartment.

“Shortly after communication stopped, officers breached the door and entered the unit. An interaction occurred which included officers deploying a conducted energy weapon at the man, as well as firing plastic projectiles,” said the SIU in its press release.

“When these had no effect, an officer discharged a firearm and the man was struck.”

He was pronounced dead at the scene.

What happened to Ms Korchinski-Paquet?

Ms Korchinski-Paquet, who was of black and indigenous descent, died after falling from a 24th-floor balcony in Toronto, after police had been called to help her. According to her family she suffered from epilepsy. Her mother had called police to ask them to take her to the Centre for Addiction and Mental Health in Toronto.

The SIU has released few details about her death, which has been widely covered by local media.

In a news release announcing its investigation, it said “officers were inside an apartment unit on the 24th floor, they observed a woman on the balcony. A short time later, the woman fell from the balcony to the ground below.”

Over the past month, Ms Korchinski-Paquet’s name has been mentioned alongside George Floyd’s at Black Lives Matter protests across Canada, and the words “Justice for Regis” has become a rallying cry for people demanding an end to systemic racism in Canadian policing.

Now, Mr Choudry’s name has been added to the growing list of ethnic minority people across Canada who have been killed during a police “wellness check” on their mental health.

What has been the reaction to the deaths?

Protests erupted in the Toronto area on Sunday and Monday. Image copyrightGETTY IMAGES

Protesters marched through the streets of Mississauga and closed down a section of road near where Mr Choudry was shot, demanding an independent inquiry into his death.

In a joint press conference on Monday afternoon, the National Council of Canadian Muslims, the Urban Alliance on Race Relations and Muslim Council of Peel said they wanted the officer who shot him to be fired immediately.

“The police need to be held to the same level of justice as the rest of us are. There is blood on their hands and the officer who pulled the trigger should never be trusted with a gun or badge again,” said Mohammed Hashim, who is on the board of the Urban Alliance.

The SIU, which investigates all civilian deaths that occur during interactions with police, is currently investigating both Mr Choudry’s death and the death of Ms Korchinski-Paquet.

But many have doubted the police watchdog’s ability to deliver justice. Ms Korchinski-Paquet’s family delayed their interview with the SIU over concerns the investigation was compromised after they allege police leaked details of her death to the media.

The Muslim Council of Peel is calling for an independent inquiry unconnected to the SIU, and a review of police use of force during mental-health checks. Mr Choudry was originally from Pakistan.

“I am heartbroken for the family,” the council’s executive director Rabia Khedr said in a statement.

“Police are trained to catch criminals and shoot to kill. Regardless of all the mental health training they receive, they should never be the first responders in such incidents. We have to invest in crisis intervention services with the right expertise and protocols to manage someone in mental distress.”

Concerns over the efficacy of the SIU to prosecute police brutality go back years.

In 2008, Ontario’s ombudsman André Marin released a critical report, saying “there’s no doubt in my mind that an SIU investigation is one which is currently done through blue-coloured glasses”.

Subsequent governments have attempted to reform the SIU, with various desired outcomes.

In 2019, Ontario’s current premier Doug Ford passed legislation meant to streamline the investigations process after promising free police of “onerous restrictions that treat those in uniform as subjects of suspicion and scorn”.