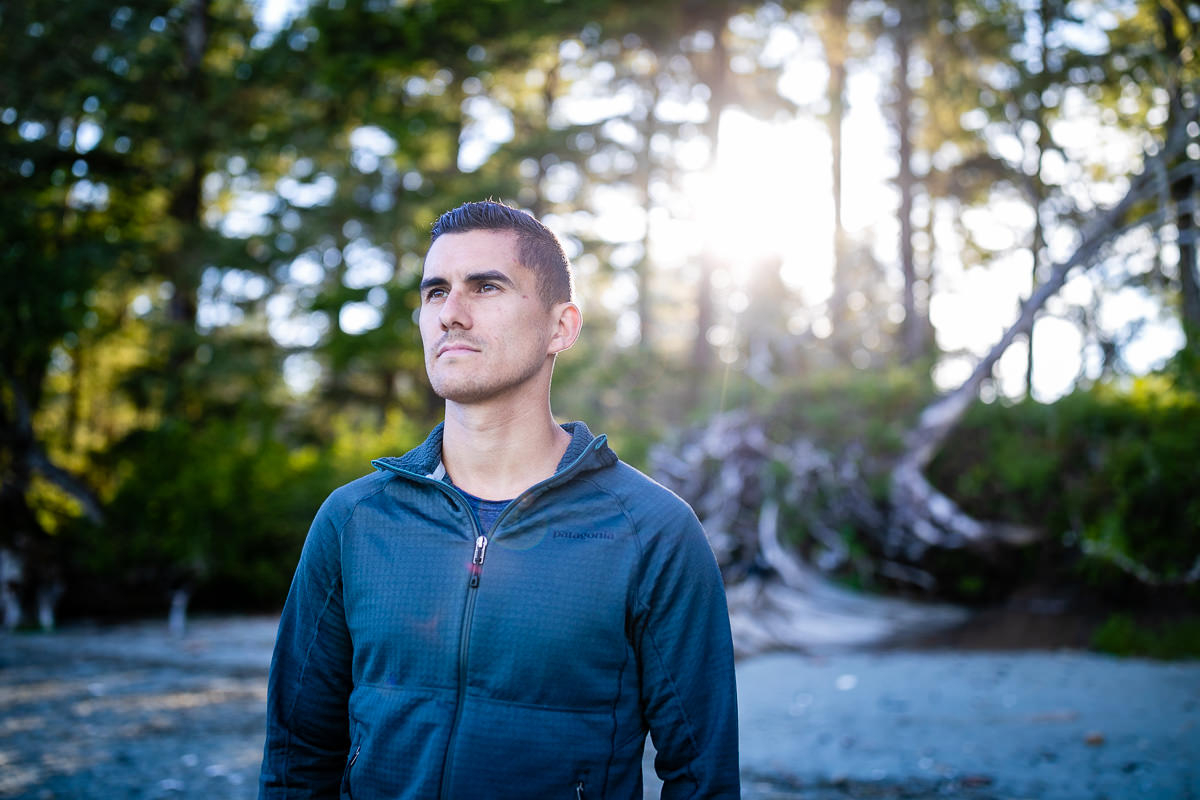 “Conservation is what we learn and observe from the natural world,” said Tyson Atleo, a hereditary chief of the Ahousaht Nation and the economic development lead of Nature United conservation organization. Photo by Darryl Augustine

“Our stories are true,” Tyson Atleo’s great-grandmother used to tell his father growing up.

Tyson Atleo’s father, Ah-up-wa-eek, Shawn Atleo, is the Tyee Hawiith (head chief) of the house of Klakishpeeth, and former National Chief of the Assembly of First Nations.

Shawn Atleo taught his son the same words he had heard from his grandmother growing up, “our stories are true.”

Throughout his life, Atleo came to understand what those words meant.

Atleo has fine-tuned his critical thinking skills, and learned the western world’s scientific approach and worldview, but he has also witnessed and experienced first-hand the power of natural law, the precision of his teachings and the truth of their stories.

“Conservation is what we learn and observe from the natural world,” said Atleo.

I sat down on May 21 for a Facebook live interview with Atleo as a part of a series, launched at the peak of COVID-19, featuring Indigenous leaders from across B.C., discussing Indigenous laws, conservation ethics and self-determination.

Tyson Atleo is a 27th-generation hereditary chief of the Ahousaht Nation of the Nuu-chah-nulth people from the west coast of what is now known as Vancouver Island. Based in Victoria, the traditional territories of the Lekwungen and W̱SÁNEĆ nations, Atleo is the economic development lead for Nature United, an affiliate of the world’s largest conservation organization.

Atleo has been raised as a hereditary leader to respect Hishuk – ish – tsawalk, a Nuu-chah-nulth worldview meaning “everything is one,” and the four pillars of Nuu-chah-nulth life — lessons of respect, care, love and teaching, that he carries into his conservation work.

“Indigenous Peoples around the world are still arguably the closest to an understanding of what place-based connection feels like and how to respect it, and what structures allow us to live within a sustainable model,” Atleo said. “It is my mission in life to bring people into that space, to understand how we connect to the natural world.”

Atleo comes from a people with a great history of transformation and adaptation, skillful whalers, sealers, fishermen, with different models of harvesting and expertise in sustainability, he told me in our interview. Indigenous laws based on natural law still exist, he said, and have the potential to carry all societies into a healthier future.

“As Indigenous peoples, our wellbeing is intimately connected to the wellbeing of the lands, waters, and natural world,” Atleo said. @NatObserver #FirstNationsForward #IndigenousLedConservation

Atleo has been working with Nature United since 2016. He oversees the development of a regional economic opportunity strategy for the Emerald Edge in the Pacific Northwest. Emerald Edge is known as the largest intact coastal rainforest in the world. The program he works with aims to support Indigenous and local communities to be conservation leaders and rightful stewards of their lands and waters.

“I want to carry our lessons forward and share them, helping people and the earth recover,” he said. But he isn’t naive about how long it takes and how much effort is required to rebuild trust, to nurture healthy and reciprocal relationships and to heal from the generational impacts of colonialism.

Patience is key, he said, a lesson he hopes people realized during the COVID-19 pandemic that halted the world in its tracks.

“Human beings have been violating natural laws and breaking protocols established with life-giving forces,” he said. “No other experience in my lifetime has reminded me so much that we are all in this together.”

As an economic lead, Atleo understands how value systems work. Many economic systems value things such as GDP, profit and production, over people or the well-being of the whole, but past global and national economic recessions have led to wider gaps between the wealthiest and poorest communities, he said.

The World Economic Forum predicts similar trends following COVID-19. As a nation composed of many nations, Atleo thinks Canada can prevent the further marginalization of underserved communities by putting people, and the overall ecological health of the whole, before profit.

“As Indigenous Peoples, our well-being is intimately connected to the well-being of the lands, waters and natural world,” Atleo said. But in order for Indigenous knowledge to effectively govern stewardship practices, Indigenous rights need to be recognized.

Nature United is a chapter of one of the world’s largest conservation organizations, The Nature Conservancy. Atleo says he chose to work with them because of the organization’s rights-based approach to ecological conservation.

Where Indigenous rights are respected and upheld, and people are able to make decisions for and about their people and territories, there are healthier ecological outcomes, he said. Indeed, Indigenous Peoples protect 80 per cent of the world’s biodiversity, and steward precious ecosystems which feed the entire planet.

The United Nations Declaration on the Rights of Indigenous People (UNDRIP) is an important document to help empower Indigenous-led conservation practices, Atleo said. UNDRIP has been recognized by Canada and passed as legislation in the province of B.C. How the 47 articles are interpreted, implemented and upheld continues to be unveiled on a case to case basis.

“Change takes time, transformation is always difficult,” Atleo said. “We want to learn from the past and move forward in a good way, but it won’t always look like it looked in the past. Every generation will change the way things happen, and that’s our right as the new generation.”

While people are anxious to construct a new reality, and to slow down the devastating impacts of the environmental crisis, a rushed approach is not always right or appropriate, he said.

“We need patience from the non-Indigenous communities, as we build ourselves back up,” Atleo said. “People want to support because they have a commitment to environmental stewardship too, but it’s far better when organizations support the people whose responsibility it has been to care for a place for a very long time — people who have the experience in the area.”

Indigenous communities are still dealing with the impacts of colonialism, attempting to be well and reconstruct their cultures, laws and lives, Atleo said. And he says a process of regenerative healing for people and nations is needed.

He says he tells visitors to his territories the same thing, as he takes them out on his boat and explains different watersheds as arteries, different bodies of water as entities that provide endlessly and need to be cared for reciprocally.

Atleo hopes, by building relationships and showing people the truth of his stories and the power of the natural world, they too will believe that a different future is possible.

“A lot of our deeply spiritual and cultural experiences are private, but I can assure you there have been moments when Hishuk – ish – tsawalk, the idea that everything is one and interconnected is real and alive.

“I have seen it, witnessed it, experienced it. Our stories are true,” Atleo said.