The free gift, revealed in internal documents, runs counter to calls to ‘demilitarize’ police and society. 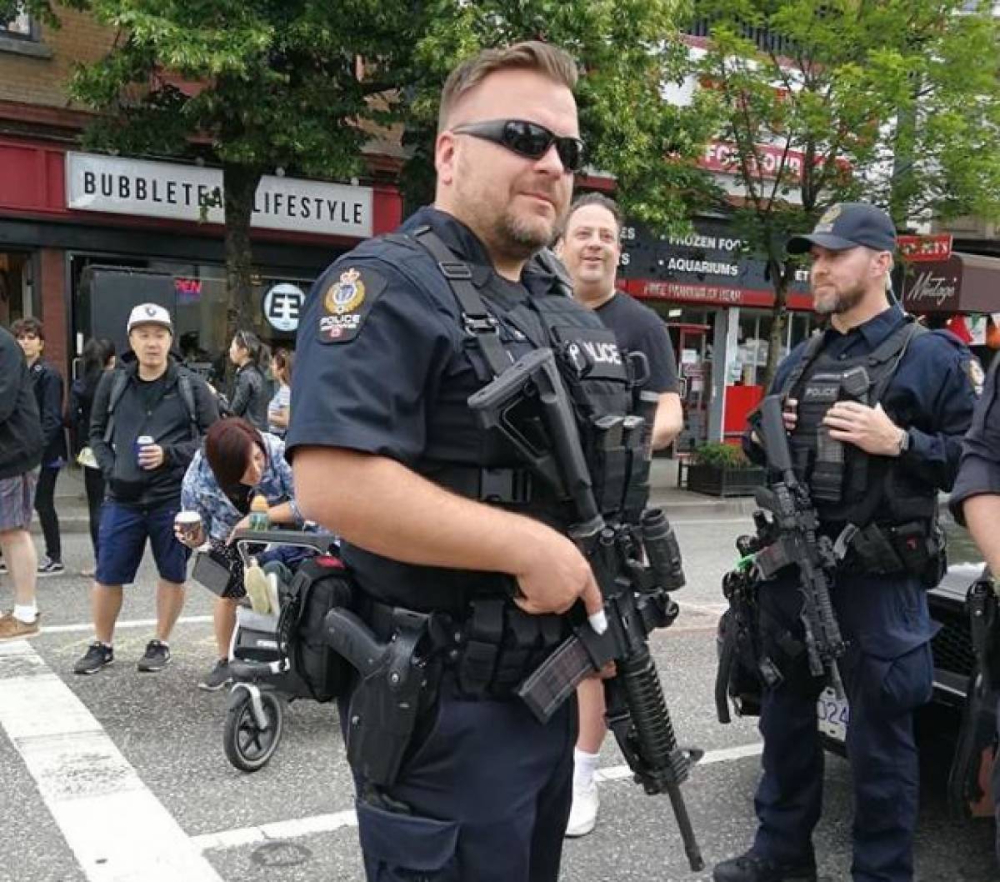 Vancouver police carrying assault rifles at the Italian Day celebration on Commercial Drive in 2018. The police responded to a complaint saying displaying the high-powered weapons at public events deters terrorism. Photo by Adrienne Smith via Twitter.

After the government’s assault rifle ban for civilians, announced in May, the gifting of such guns raises questions.

What do police need all those high-powered weapons for, now that they are denied to the population it protects?

And, amid worldwide protests on heavy-handed policing, why have Canada’s police forces become increasingly militarized, and why has the federal government helped?

The giveaway of 2,012 assault rifles was done in 2016, through a formal government program to dispose surplus equipment.

There have been no other donations of assault rifles to police since 2016, although there were transfers of other equipment. For example, the military sold ammunition and gave helmets to the RCMP between 2018 and 2019, respectively for training local police in Iraq and use in a UN peacekeeping mission.

Asked whether it will consider stopping the practice, the Department of National Defence reaffirmed its longstanding policy that, under certain circumstances, such donations of equipment “may occur.”

“Donation is typically only pursued when deemed to be in the interest of the Crown and/or as a cost avoidance measure,” the department said.

The defence department had previously explained to this journalist that the 2016 donation of the guns, worth more than $3 million, was because the military had upgraded and that the old rifles were “ineligible for sale to the public and disposal options were limited to sale or donation.”

Potential qualified buyers at the time “lack[ed] interest.” The rifles therefore were given to police to “better serve the interests of Canadians,” a spokesperson said.

The civilian version of the C8 rifles the defence department gave to police is commonly dubbed the AR-15. It’s the same weapon used in a number of notorious mass shootings, including at a Newton, Connecticut elementary school, a Las Vegas concert and an Orlando nightclub.

In Canada, an 18-year-old hostage taker with an AR-15 fired 50 rounds at police in Saskatoon in 1982, and bullets from the same type of weapon paralyzed a Toronto woman in a botched drive-by shooting and have been seized from bank robbers in B.C. The Montreal massacre shooter used a similar semi-automatic rifle, a Ruger Mini-14, to kill 14 women in 1989.

It is not clear which police forces got assault rifles from the Canadian government, although the defence department had said the recipients were “non-federal.”

North American police forces have caught flak for what critics see as their increasing use of military equipment and tactics.

Recent protests against mistreatment of people of colour by police have called into question the methods and culture of law enforcement. The demonstrations, sparked by the killing of George Floyd, an unarmed Black man in the United States, have included calls to de-escalate interactions between police and civilians, and to make peaceful conflict resolution the default.

Those urgings come after researchers found, “Deployments of SWAT teams — special weapons and tactics units — have risen in major Canadian cities and are higher in some cases than those by U.S. public police. Based on our research, we can see that militarization has been normalized within Canada’s largest police services. SWAT teams, once considered a last-resort option for police forces, are now being used in routine areas of policing.”

Critics say Canada’s police forces look more and more like soldiers rather than public guardians. Where to draw the blurred line was debated last month, as the Winnipeg police argued with a CBC reporter that it was “erroneous and confusing” to label their $342,800 armoured vehicle a tank.

Four years later, Blair, in his federal role, explained the recent assault rifle-ban aims to aid in “ending the… militarization of our society.”

Which raises the question of whether the assault rifle ban for civilians should be matched by a downgrading of the arsenals held by the nation’s police forces.

It also points to the need for considering stricter rules about when police are allowed to carry such high-powered weapons — at protests or acts of civil disobedience, for example.

And it has observers trying to reconcile two statements. Blair says the goal is to end the militarization of society, while Canada’s military says giving its warfighting hand-me-downs to police will “better serve the interests of Canadians.”

Ethan Lou is the author of the nonfiction books Field Notes from a Pandemic and Once a Bitcoin Miner.