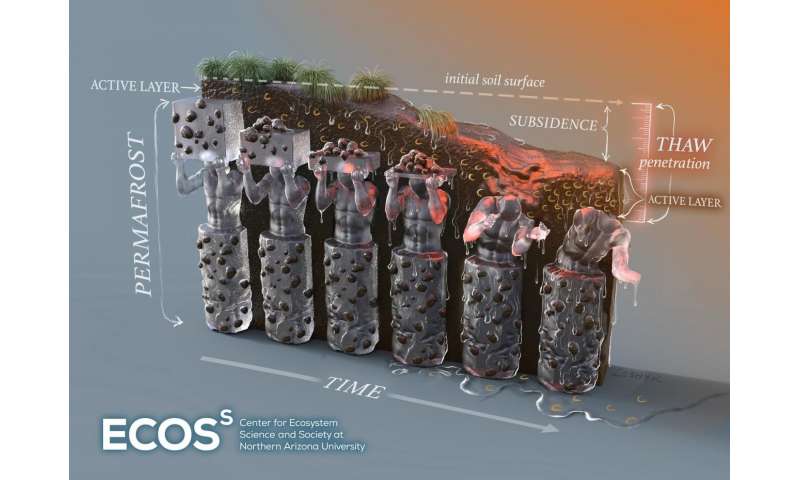 A time series shows ground-ice ‘atlases’ in permafrost struggling to support the active layer as soil temperatures warm and accelerate thaw. As ice is lost, we see a significant shift in the soil surface over time, and the need to account for subsidence in measurements. Credit: Victor Leshyk, Center for Ecosystem Science and Society

New research from a team at Northern Arizona University suggests that subsidence, gradually sinking terrain caused by the loss of ice and soil mass in permafrost, is causing deeper thaw than previously thought and making vulnerable twice as much carbon as estimates that don’t account for this shifting ground. These findings, published this week in the Journal of Geophysical Research: Biogeosciences, suggest traditional methods of permafrost thaw measurement underestimate the amount of previously-frozen carbon unlocked from warming permafrost by over 100 percent.

“Though we’ve known for a long time that subsidence happens across the permafrost zone, this phenomenon hasn’t been systematically accounted for when we talk about thaw and carbon vulnerability,” said Heidi Rodenhizer, a researcher at the Center for Ecosystem Science and Society at Northern Arizona University and lead author of the study, which was co-authored by a team from NAU, Woods Hole Research Center, Instituto de Ciencias Agrarias, and Yale University. “We saw that in both warming and control environments, slight temperature increases drove significant thaw and unlocked more carbon than we saw when we weren’t looking at subsidence.”

Traditionally, permafrost thaw has been calculated by measuring active layer thickness. To do that, scientists insert a metal rod into the ground until it hits permafrost, and measure from that depth to the soil surface. However, subsidence can mask actual thaw by lowering the soil surface and changing the frame of reference; for instance, some long-term experiments that rely on measuring active layer thickness have not recorded significant changes in thaw depth from year to year, despite rapid temperature warming.

So Rodenhizer and her team combined subsidence with active layer measurements to discover how much the ground was sinking, and how much unlocked carbon was being missed. At their warming site near Healy, Alaska, the team used high-accuracy GPS to measure the elevation of experimental plots at six time points over nine years. At each plot, Rodenhizer and her team found that permafrost thawed deeper than the active layer thickness indicated: 19 percent in the control plots, and 49 percent in the warming plots. The amount of newly-thawed carbon within the active layer was between 37 percent and 113 percent greater.

As the Arctic warms twice as fast as the rest of the planet, these findings have potentially vast implications for global carbon fluxes. Due to the widespread nature of subsidence—about 20 percent of the permafrost zone is visibly subsided, and contains approximately 50 percent of all carbon stored in permafrost—failing to account for subsidence could lead to significant underestimates of future carbon release in global climate change projections. Rodenhizer’s team hopes that this study will convince more Arctic researchers across the permafrost monitoring network to apply this method and help change that.

“We know that these vast carbon stores in permafrost are at risk, and we have the tools to account for subsidence and track where the carbon is going,” said permafrost researcher and senior author Ted Schuur. “We should be using everything in our toolbox to make the most accurate estimates, because so much depends on what happens to Arctic carbon.”