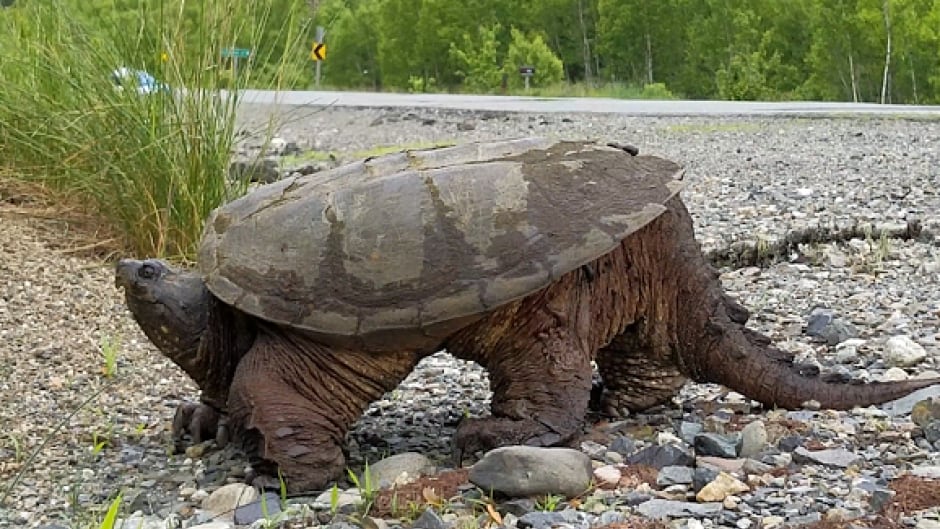 Snapping turtles are seeking warm, sandy roadsides to lay eggs – but don’t try to help them cross the road

There are many myths about Snapping Turtles that we make an effort to dispel so people will not be discouraged to help them.

They do not have the strength in their jaws to ‘bite off fingers’ or ‘break broom handles’.

According to a study in the Journal of Evolutionary Biology from 2002, a snapping turtle’s actual jaw strength registered between 208 and 226 Newtons of force. By comparison, humans average a bite force of between 300 and 700 Newtons when we bite with our molars.

The reason they snap is because their plastron (bottom shell) is too small for them to retract into when they feel threatened. They are the only Canadian species that cannot ‘retract’ into their shell for protection. Their only measure of defence is to ‘snap’. They must be handled with caution as a measure to be prudent, not because they are ‘aggressive’ because they are not. On the roads, the public is generally encountering a gravid (egg carrying) female who is nesting. They will be a little more defensive as an act of ‘protection’. They are a docile species that when met in the water, where they spend most of their time, are actually ‘curious’ creatures who may come up and bump your ankle to investigate who/ what you are.
You simply have to respect the recommended precautions and know you are helping a species that is on the road to its extinction that we have sent them down.

They have been on the planet some palaeontologists believe for more than 330 million years. They are a keystone species which is defined as a ‘species on which other species in an ecosystem largely depend, such that if it were removed the ecosystem would change drastically.’

They are your freshwater sources best ‘cleaners’ and are referred to as our freshwater‘janitors’ because of the vast amount of carrion and decaying vegetation they consume.

In providing this humble service, the only thing they ask in return is their survival.

They are like the rivets on an airplane wing; if you remove too many the wing falls off and you can no longer fly. That is how important their presence is to human life.

Their significance on the ladder of biodiversity cannot be overemphasized. Remove them and it would be like trying to climb a ladder that is missing rungs.

The adult reproducing females we meet nesting on the roads are worth their weight in gold to their turtle populations. They are who will contribute to the survival of their species.

If we lose just one, it will take 59 years for her to replace herself.
That is almost a human lifetime to replace just ONE !

Less than 1% of all Turtle eggs makes it to sexual maturity, mostly because of predation.

That is why it is imperative to protect the adult populations who will be the saving grace of their species.

They are on their way to extinction. Imagine on the planet for over 300 million years and in less than 50 years WE have sent them down the road to their extinction.

It seems very unfair when you think about the service they render us by keeping our freshwater sources clean because of the amount of bacteria producing carrion they consume.

Only 2.7% of the worlds water is freshwater. 20% of that is found in Ontario.
Turtles play a significant role in keeping that water-source clean.
With rising temperatures we will witness large populations that will be migrating into search of a fresh water source.

Turtles are doing their part but can we say the same about ourselves?

The main reason for the decline in their populations is habitat loss because of over development. Toronto is presently restoring 3 wetlands around the city because they realized the mistake they made in removing them. Wetlands are your water regulators in times of flood and drought. They sequester huge amounts of carbon. They are your freshwater natural filtration units.

The turtle populations need all the help we can give them.

ITS NESTING SEASON ! PLEASE, SLOW DOWN, LOOK AHEAD and GIVE THEM A BRAKE !
THANK YOU