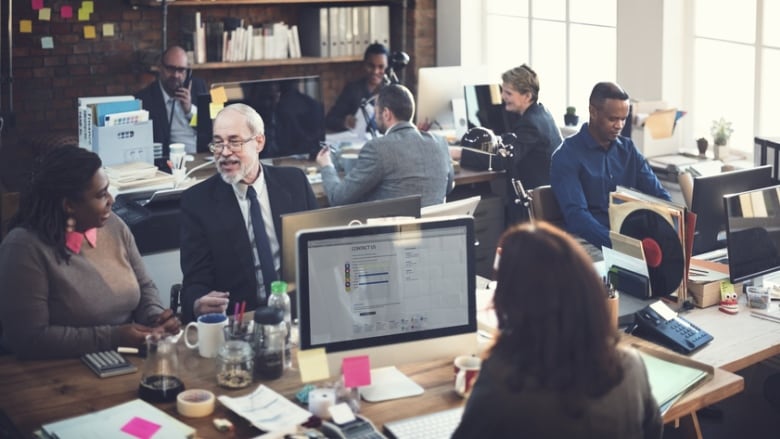 Some experts and researchers suggest employers should consider a type of four-day work week that allows employees to work fewer hours and get paid their same weekly salary. (Rawpixel.com/Shutterstock)

It’s only been days since a small Nova Scotia municipality launched a four-day condensed work week pilot project, but according to the chief administrative officer, so far, so good.

The nine-month project, developed in the wake of the COVID-19 pandemic, allows the municipality’s core employees to work the same number of hours over a period of four days, known to many as a compressed work week.

“Our staff seem to be extra excited about the new work system,” said Barry Carroll, Chief Administrative Officer for the Municipality of the District of Guysborough. “We had some minor adjustments to make, obviously, but otherwise it’s been pretty seamless.”

While the compressed work week is not a new concep​​​​​​t, it has been given some renewed attention since COVID-19 changed the way people work. For many, that includes more flexible hours and working from home.

“What [the pandemic] has shown organizations is that people can work in different work situations,” said Erica Carleton, an assistant professor of organizational behaviour at the University of Saskatchewan.

“They’ll get their work done. You don’t need your boss sitting on top of you to finish your work.”

The idea of a four-day work week recently gained a bit more steam after New Zealand Prime Minister Jacinda Ardern mused about it in a Facebook live chat, saying that it certainly would help domestic tourism, as more flexible working arrangements could allow New Zealanders to travel more within their own country.

However, some experts and researchers suggest employers should consider another type of four-day work week, one that allows employees to work fewer hours and get paid their same weekly salary.

That structure, they said, would not only improve a work-life balance, but boost productivity among employees.

“There’s a theory called the happy, productive worker hypothesis,” said Carleton. “The happier people are, the more productive they are. Increased happiness, increased well-being, just having people less stressed, they’ll be better at doing their jobs.”

But paying workers the same amount for fewer hours could be a difficult and counterintuitive concept for employers to embrace. Carleton acknowledged that the benefits an employer would see from such a work structure, including a boost in employees’ health and well-being, wouldn’t be immediate.

Still, some companies have implemented this type of work structure and say they have recorded some positive results. Last year, Microsoft Japan went to a four-day work week, closing its offices every Friday in August, while paying their employees the same as if they had worked the full five days.

The company said that as a result, labour productivity rose by nearly 40 per cent compared to August 2018.

Last year, the U.K.-based University of Readings Henley Business School surveyed 505 business leaders and more than 2,000 employees across the country, including over 250 businesses that currently operate with a four-day working week.

While the researchers acknowledged the results were preliminary findings that were not peer reviewed, they did reveal some interesting trends.

The survey found that of those businesses that have already adopted a four-day working week, nearly two-thirds have reported improvements in staff productivity. And more than three quarters of staff working in that environment reported they were happier, less stressed and took fewer days off.

“The main fallacy on longer work week is to assume a linear relationship between the amount of time worked and the productivity of an employee,” Thomas Roulet, a researcher on the project, told CBC News in an email.

“An employee can do more in four days than in five, if she/he is more focused, in better shape mentally and physically.”

He said it’s very likely that the COVID-19 crisis will accelerate the move to a shorter or more flexible work week, enabled by more people working remotely.

While it may be the worst-kept secret in offices, Laura Vanderkam, a time management expert and author of Off the Clock: Feel Less Busy While Getting More Done, said the reality is “that when people are in the office for 40 hours, they almost never actually put in 40 hours.”

Cutting back on non-work activities

“If you had the same amount of work you had to get done, but you had 36 hours to do it instead of 40, they would do less of the stuff that filled time that isn’t your job.”

She said that employers should be fixating less on the hours and more on what their employees are getting done.

“And then if somebody manages to do it in four days a week? Great.”

The Current :Is it time for a 4-day work week?

Could the four-day work week be coming to Canada? U.K. Labour politicians made it an election pledge, and a trial at Microsoft Japan showed success. We look at the pros and cons of a four-day week — and a three-day weekend. 14:44

But whether it be a compressed work week or a work week with fewer hours, experts agreed that both have potential drawbacks.

Chris Higgins, professor emeritus at Western University’s Ivey Business School, said studies have shown that a compressed four-day work week, while popular with employees, leads to a decrease in productivity when it comes to blue-collar jobs.

“A lot of these jobs are physical labour jobs. And, you know, when you start working 10-hour shifts instead of eight-hour shifts … sometimes you’re physically drained.”

Also, longer shifts could negatively impact an employee’s time after work, leaving them less time to engage in extracurricular activities or spend time with their families, Carleton said.

As for the four-day work week with fewer hours, the Henley Business School survey found that staffing and scheduling could be a major issue, particularly if an employer needs something from an employee on a Friday and that employee doesn’t work that day.

Some employers had trouble implementing shorter work weeks. For example, London-based Wellcome Trust, the world’s second-biggest research donor, ended a four-day week for 800 of its head office staff, finding it was “too operationally complex to implement.”

In the U.S., Treehouse, a large tech HR firm that implemented a four-day week in 2016, reverted back to five days, saying it felt it had failed to keep up with competition, the research found.

Meanwhile, some business groups have warned such a structure could increase the cost of labour.

“The move from five to four days a week is not adapted to all occupations, tasks and jobs — it’s basically useful to non-routine, social and high-value tasks that will benefit from healthier, more balanced and more focused employees,” Roulet said.

Also, something could be lost when some of those ostensibly non-work activities are curtailed, including building social relationships among colleagues.

“One might argue that, you know, talking with your colleagues about social stuff is good for building trust,” Vanderkam said.

Meanwhile, Carrol, the CAO of Guysborough, said he is skeptical that a four-day work week with fewer hours is doable or will lead to a more productive workforce.

“I think you’d have to run a few trial projects in order to get that [proven]. For most businesses, it’s difficult to pay … the same salary for less hours. It’s a stretch to be able to get there.”

Mark Gollom is a Toronto-based reporter with CBC News. He covers Canadian and U.S. politics and current affairs.