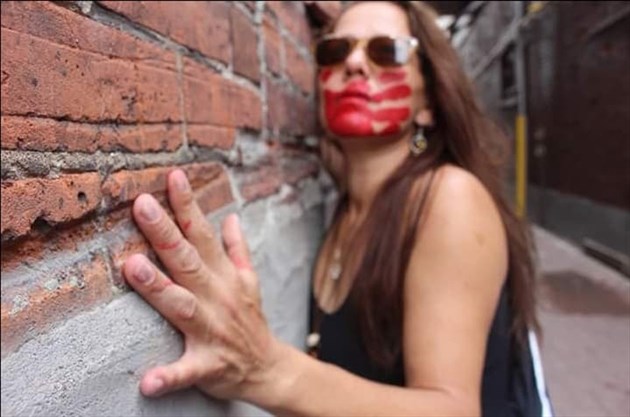 Angela Cadieux of Orillia advocates for justice for Missing and Murdered Aboriginal Women and Girls, painting a handprint on her face to symbolize being silenced and a lack of consent. – Angela Cadieux photo

PARRY SOUND – Governments need to act on the 231 recommendations for action in the Missing and Murdered Indigenous Women and Girls National Inquiry report, according to Ontario Regional Chief RoseAnne Archibald.

Chief Archibald reminded the federal and provincial governments of their failure to implement the recommendations in the report titled Reclaiming Power and Place, Toronto on June 3, one year after the report was released.

The report, introduced June 3, 2019, was created to ensure all forms of government, industry, and public services have a guide to follow for best practices to insure the overall safety of Indigenous women and girls in Canada.

Chief Archibald asked all levels of government to accelerate their fiscal investments to address this ongoing national tragedy. The advancement of action put in place by the national Inquiry are to be guided by the family members and survivors to ensure the calls for justice are practical, solutions-oriented and geared to the realities of Indigenous girls’ and women’s lives.

Furthermore, Chief Archibald suggests Indigenous governments and Indigenous women’s organizations be supported with the implementation of an annual “calls for justice” report card.

“The time for action is NOW. Move forward with community-based and trauma informed responses and protocols. These Missing Murdered Indigenous Women, Girls and their families deserve full attention and full implementation to ensure the violence against the Indigenous women and girls stops,” said Chief Archibald in a press release.

“The Canadian government is part of the problem,” said Suzanne Smoke of Alder Ville First Nation Mississaugas of Rice Lake, who is the outreach co-ordinator for Muskoka Parry Sound Sexual Assault Services. “The colonial damage has been happening for over 528 years. It can’t be fixed with short-term funding and Band-Aid solutions. We need full investment to our ways and our structures to succeed in healing our people, our way.”

She also said it is time for Indigenous leaders to “slide a chair up to the table and tell them (Canadian politicians) to move over.”

She said Indigenous leaders need to assert themselves as equals to the Canadian government.

“This is the time of reckoning,” she said, adding that Indigenous leaders will take their place and fully participate in the best interest of “our Indigenous people … this way MMIWG2ST can stop and the healing can truly begin.”

The Six Nations Elected council also sounded off in a statement released on June 3. It is “joining the call for governments to invest in resources for new innovative healing programs and services that will ensure equality for our women so they can live safe and secure lives.”

Anishinabek Grand Council Chief Glen Hare commented on the lack of action a year after the national inquiry report was released, according to a press release.

“We demand the federal government fully support and implement the Final Report of the National Inquiry into Missing and Murdered Indigenous Women and Girls. Failure to do so perpetuates the targeted genocide of our people. This must stop,” he said.

The report states only transformative legal and social changes, such as to structural systems that only prolong the violence, can resolve the crisis devastating Indigenous communities across this country.

“Our women and girls are held in highest esteem,” said Chief Hare, speaking of Indigenous values. “They are the life givers and caregivers to our communities.”

Indigenous communities and allies are awaiting response from the Canadian government.

Strength Of Two Buffalo is Kanien’kehá (Mohawk) Turtle Clan from Six Nations of the Grand River Ohsweken. For the past 37 years, Strength Of Two Buffalo has been actively decolonizing his life apprenticing with and learning from a diverse community of elders such as the Haudenosaunee, Anishinabek, Nehiyawok (Cree), Lakota, Metis and Inuit peoples from across both Canada and the United States. He has worked on the front lines for Missing and Murdered Indigenous Women, Girls and Two-Spirit People, environmental issues, Indigenous sovereignty, water and child protection.