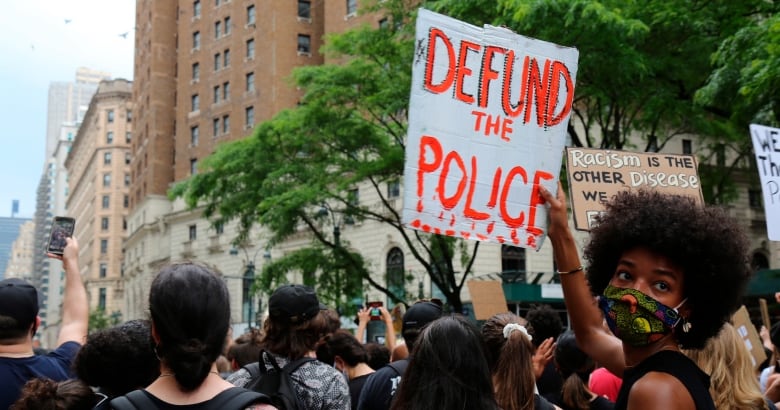 Founder of Black Lives Matter in Canada explains the call to defund police. I think that we deserve better in our society,’ says Sandy Hudson

We are heartbroken time and time again to witness how Black and Indigenous people are killed by law enforcement in Canada and no one is held accountable. We are outraged about all the lives traumatized and lost at the hands of systemic police brutality, in Canada. We are tired of the narrative that police brutality exists because there are a few bad cops (yes, we hear that in Canada too). And we are determined to add our voices to the powerful and growing movement that will change all of this.

Police brutality is rooted in systemic racism and the oppression of Black people, Indigenous people and people of colour. And it is not just an American problem. It thrives in Canada just the same because the structures we have built allow and support it. But it won’t survive if the broader community stands up and speaks out on behalf of Black lives.

Click here to email your local representatives about the need to defund the police, so that immediate action is taken to address police violence and ensure the safety of everyone in our communities.

In Toronto, Black people are 20 times more likely to be killed by police. In Montreal, Black and Indigenous people are 4-5 times more likely than white people to be stopped by police. The only reason we don’t have more of that data across the country is because police departments don’t actually collect data on race, making it even harder to hold them accountable. But in the past few weeks alone, 26 year old Chantel Moore was shot and killed by police in New Brunswick after calling them for a wellness check. D’Andre Campbell was killed when he called police in a Toronto suburb for mental health support. Regis Korchinski-Paquet died after police were called for a mental health check too. And there are many more.

None of this is surprising when you know the history of the RCMP – an institution first created to forcibly remove and subdue Indigenous peoples so that colonizers could take their land.

This is why Black Lives Matter organizers in Canada are calling on everyone to join the call to defund the police. Because police budgets increase year after year and people are still getting killed. Because reform isn’t working. And right now, huge change is within our reach.

So, Ron, will you join the call to defund the police and instead invest in alternative systems that actually keep everyone safer?

We realize that for some people, a call to defund the police might sound radical, scary even. But here’s the thing – reimagining public safety by defunding the police will not only allow us to reinvest in our communities, it will actually keep everyone safer. Seriously.

Congressperson Alexandria Ocasio-Cortez recently pointed out that we already have a good model for what defunding the police looks like: a wealthy, white suburb. In her words, “Affluent white communities already live in a world where they choose to fund youth, health, housing etc. more than they fund police.”

In the past few weeks, a Black-led movement of millions has taken to the streets to call out systemic racism and advocate for ending police violence through defunding the police. And in an incredibly short time, Black organizers and leaders have worked as part of this protest movement to accomplish what many thought was impossible. From San Francisco to Minneapolis, city leaders are announcing plans to reallocate funding to unarmed community response efforts or even disband police departments altogether.

In Canada, important gains have been made too. Earlier this week, the Green Party’s Elizabeth May called for a full inquiry into the RCMP. NDP Leader Jagmeet Singh put forward a motion calling on the House to recognize the systemic racism within the RCMP, trigger a review of the RCMP budget, and call for a full review of officer training and the use of force by members. In Ottawa, Toronto, Vancouver and more, city councillors are signalling their support for defunding the police. We are truly at the precipice of achieving real, systemic change across North America – but sustained pressure is essential.

Click here to contact your local representatives about defunding the police, and get connected to more useful resources and ways to take action.

Some people may say that as an environmental organization we need to stay in our lane and just focus on issues like pollution and climate change. We couldn’t disagree more.

At Stand.earth, we unequivocally stand in support of Black lives and denounce white supremacy and police violence in all its forms. Racism, white supremacy, and state-sanctioned violence is an issue everyone needs to stand against. And what’s more, racial discrimination and environmental injustice and climate change are interconnected systemic issues – where communities of color experience it firsthand and suffer disproportionately.

We are proud to be part of a growing movement of non-profit groups from different sectors that are calling on elected officials across North America to take action to end police violence. This must not, cannot, be the fight of civil rights and Black activist groups alone.

With determination and love,
Liz and the whole Stand.earth team

P.S. Still have questions or looking to educate yourself more around calls to defund the police in Canada? Check out these by graphics Hilary McNaughton explaining what public safety could and should look like instead. Or read this CTV article featuring interviews with Canadian Black activists Sandy Hudson and Desmond Cole.

P.P.S. Click here to read Stand.earth’s full statement on Black lives, police violence, and white supremacy, along with a list of resources and ways to support the Black community from wherever you are.

Outrage and calls to ‘defund police’ in Canada