Trying to cut spending as the pandemic reduces tax revenue, governments are finding it easier to lift restraints on what consumers pay for fuel. 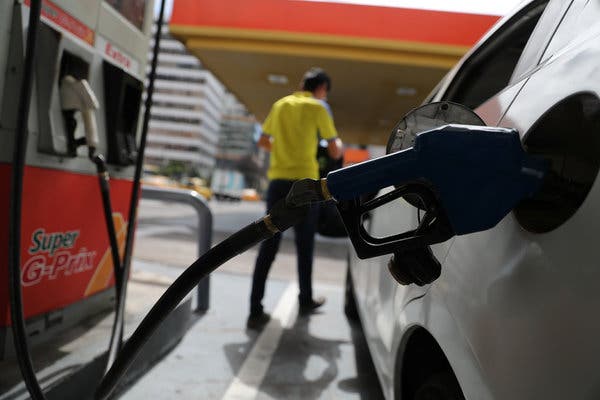 Filling up in October in Quito, Ecuador, where the government slashed fuel subsidies to save $1.4 billion a year, then reversed course.Credit…Ivan Alvarado/Reuters

The coronavirus pandemic has sent economies into recession and reduced government revenue, so some countries are taking a politically perilous path: removing restraints on electricity and petroleum prices.

Nigeria and Tunisia have lowered fuel subsidies in recent weeks, and India has raised taxes on gasoline and diesel fuel. Sudanese officials plan to replace some subsidies with direct cash payments to the poor. Venezuela, where the economy was collapsing before the pandemic, has partly reversed decades of gasoline subsidies. And the state-owned electric utility in Dubai is seeking to raise rates for the first time in a generation.

In contrast to the recent past, elected leaders are facing little political blowback for taking away subsidies and raising taxes. That’s because the prices of oil, natural gas and other fuels have collapsed in recent months. In addition, driving, flying and industrial activity have dropped off sharply.

But that could change once world energy prices shake off the pandemic’s effects.

Energy subsidies are often taken for granted outside the halls of power. But they constitute vital policy choices that weigh on government budgets and economic development.

“Governments are caught in a dilemma,” said Jim Krane, an energy expert at Rice University who has studied subsidies. “Do they want to protect the poor who may have lost their jobs and incomes, or do they want to take action against the pernicious long-term cost to their budgets?”

Countries with weak social-service and tax systems often resort to subsidies because they are a relatively easy way to deliver affordable electricity, cooking gas and petroleum. But many economists say this largess primarily benefits well-off families, because they have the biggest cars and homes. The poorest people in the developing world frequently do not own cars and may live in villages that have access to power for just a few hours a day, if they are connected to the grid at all.

In October, for example, Ecuadoreans marched in the streets after the government slashed fuel subsidies to save $1.4 billion a year. As gasoline prices rose by 25 percent and diesel prices doubled, truck drivers, Indigenous people and other groups paralyzed the country for 11 days and forced the president to leave the capital, Quito. The protests ended when the government reversed course.

Rene Ortiz, Ecuador’s energy minister, said energy subsidies were a “flag” waved by politicians and activists to win votes. “That flag attracts the poor people, who think if subsidies are taken away they will become poorer,” he said in an interview. “It’s a myth that won’t easily go away.”

It is little wonder that few countries have eagerly followed the advice of the economists at the World Bank, the International Monetary Fund and other organizations to cut subsidies.

Experts say government spending on fuel and electricity makes it harder for officials to spend on health care and education. It also encourages people to use more energy than they need, increasing air pollution and traffic congestion. In addition, some benefits of low energy prices are frittered away when smugglers resell fuel in another country where prices are higher.

Energy subsidies in more than 40 countries totaled $318 billion last year, according to the International Energy Agency — half for oil and petroleum products, and the rest for electricity, natural gas and coal. The countries with the biggest subsidies last year were Iran, China, Saudi Arabia and Russia. Roughly 10 percent of global consumption of fossil fuels was subsidized, according to the energy agency.

“The overwhelming priority for governments given the Covid-19 pandemic is to try to mitigate the impact, and so governments are trying to make sure the incomes of households are protected to some degree,” said Tim Gould, head of energy supply and investment at the International Energy Agency.

But Mr. Gould added that the collapse of energy prices gave governments “a golden opportunity.” Lower prices make it easier to cut subsidies without inflicting much pain on the poor, especially in oil-exporting countries with reduced revenues.

“As you move from the immediate emergency phase into the stimulus and recovery stage, there is a real opportunity to make sure the pricing signals are the right ones,” he said.

The last time oil prices plunged, in 2014 and 2015, countries like India, Malaysia, Morocco, Saudi Arabia and the United Arab Emirates reduced subsidies. Some, including India, compensated the poor with direct cash payments.

The moves made fiscal sense, but countries like Kuwait and Oman reversed course after protests. Others, like Russia, which has subsidized fuel since the Soviet era, did not enact proposals to raise energy prices.

Subsidies are just one way governments hand out money to the energy industry. The United States does not directly subsidize the retail price of gasoline or electricity, but it offers tax breaks to fossil-fuel and renewable-energy companies. Gasoline and diesel taxes are also lower at the pump in the United States than in European countries.

The biggest test could come in Nigeria, where cheap gasoline and diesel fuel are considered sacrosanct because the country is the biggest oil producer in Africa. When Goodluck Jonathan, the president at the time, scrapped energy subsidies in 2012, he faced two weeks of protests and riots as prices surged before he reinstated half of the previous subsidies.

The current president, Muhammadu Buhari, is calculating that this time will be different. He has deregulated prices at the pump, in a move designed to save his government $2 billion a year. With global oil prices down by roughly 40 percent since the beginning of the year, the decontrolled price at the pump is several cents a gallon below the controlled price Nigerians paid as recently as last month.

“He removed the subsidies because they are not necessary anymore,” said Judd Devermont, director of the Africa program at the Center for Strategic and International Studies, a research group in Washington. “If oil creeps up again, there will be pressure on Buhari to reinstall the subsidies. Nigerians may not get the democracy they want or the security they want, but they expect cheap oil.”

Clifford Krauss is a national energy business correspondent based in Houston. He joined The Times in 1990 and has been the bureau chief in Buenos Aires and Toronto. He is the author of “Inside Central America: Its People, Politics, and History.” @ckrausss