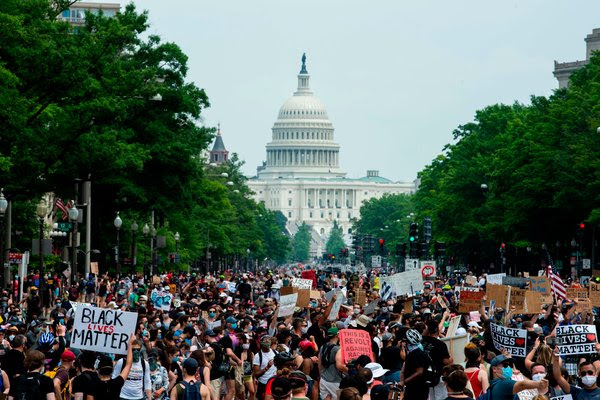 “I can’t breathe” was one of the last things George Floyd said before he was killed in police custody in Minneapolis. The words have become a rallying cry for protesters demanding accountability. Increasingly, they’ve also been taken up by environmental activists seeking to address the fact that communities of color carry a disproportionate burden of the country’s air pollution and other environmental hazards.

Lawmakers appear to be paying attention. When President Trump moved this month to weaken environmental rules for new infrastructure projects, Democratic leaders issued statements criticizing the move as an attack on people of color, who are overwhelmingly more likely to live near industrial sites. Senator Chuck Schumer, the minority leader from New York, said in a statement that the president’s executive order made clear “his total disregard for those speaking out and fighting for racial justice and a sustainable environment.”

Former Vice President Joseph R. Biden Jr., who is running for president, is also tying environmental degradation to injustices faced by poor people and communities of color. Recently, he discussed the link between asthma cases and growing up around smokestacks and refineries.
“They tend to be in places where people, in fact, have no option but to live there,” Mr. Biden said. “There’s so much we can do.”
Activists who have worked for decades on environmental justice said they were pleased to see the issue gaining attention in Washington. But they also said it’s important for policymakers to understand that addressing environmental vulnerability is not distinct from problems of police brutality, health disparities or other racial inequities.
“We’re talking about racial inequities and other injustices across the spectrum,” said Heather McTeer Toney, the national field director for Moms Clean Air Force. “We’re not just talking about one thing, which is why it’s a special moment.”
She also called this moment a wake-up call for climate advocacy groups, which are still overwhelmingly white, to learn to help communities of color achieve their environmental and energy goals rather than simply encouraging those communities to join broader national campaigns.
Jacqueline Patterson, senior director of the climate justice program at the National Association for the Advancement of Colored People, said she was wary that political attention on these issues might wane. But, she said, the last few weeks of protests have shown front-line communities that they can demand better from Washington.
“There has been a level of opening up of imagination in terms of what we can push for that won’t necessarily retract,” Ms. Patterson said. “The willingness of other folks to bend will retract, but we will continue to push forward,” she said. “That gives me hope.”

By Lisa Friedman and Julia Rosen