OPINION: Prominent Canadians have claimed systemic racism doesn’t exist in Canada. They’re wrong — and it’s not unpatriotic to say so 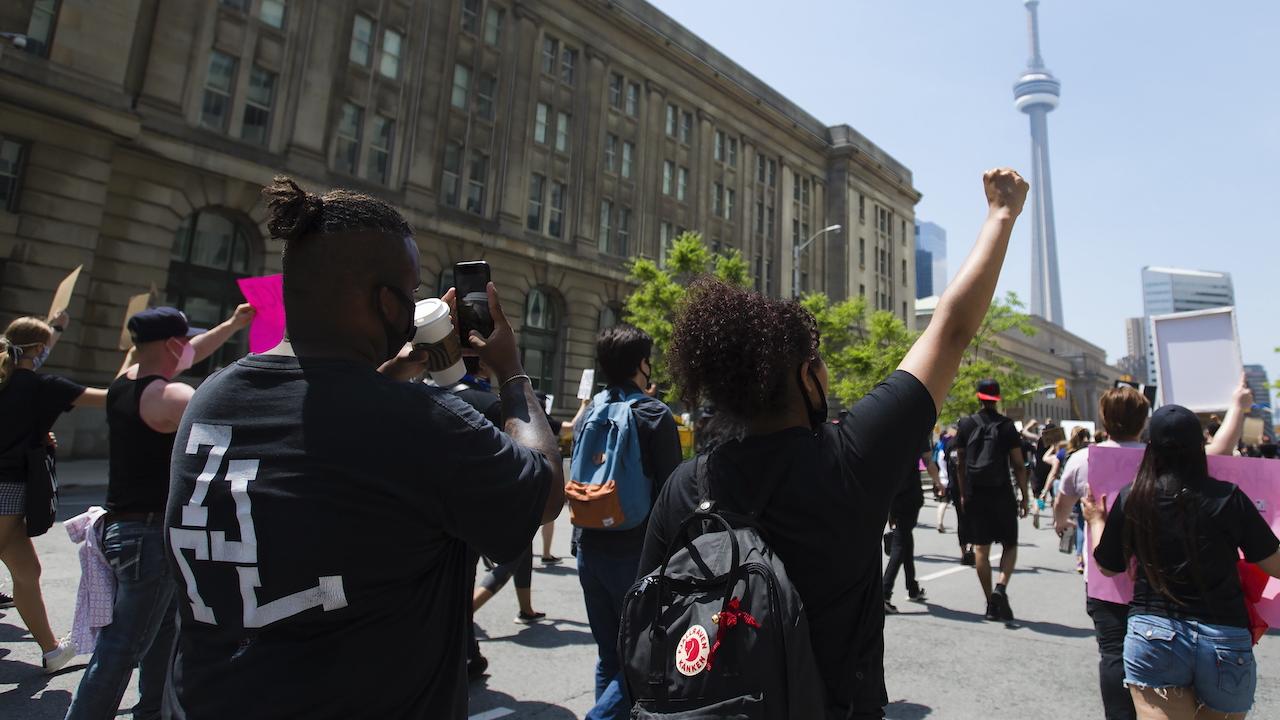 Thousands of people protest at an anti-racism demonstration in Toronto on June 5. (Nathan Denette/CP)

“There is no systemic racism in Canada.”

Does that sound familiar? More than likely it does, as this telling refrain inevitably surfaces whenever circumstances conspire to force our society to seriously grapple with issues of race, justice, and equality.

As the protests in the United States in relation to police brutality and racial justice have spread across our border and around the world, we heard it again, in a tiresomely familiar scene that played out multiple times in the past week. The most memorable example featured former Conservative cabinet minister and leader Stockwell Day, who forcefully declared in a television appearance that there is no systemic racism in our country.

That is a breathtakingly sweeping statement, but on one level, one might consider it fair enough — even if inaccurate — if there were indications that the conclusion had been reached as the result of a well-thought-out and considered position that reflected a deep knowledge of the contours of the issue.

To be fair, few reading this column will personally know Day, so we cannot definitively say whether this was the case. Perhaps he made that statement after giving deep consideration to the available sociological data and statistics in relation to the treatment of racial minorities in our nation’s criminal justice system. For example, the annual report of the federal Office of the Correction’s Investigator has consistently noted that the incarceration rate of Black Canadians is approximately three times that of their proportion of the general Canadian population — that despite the fact that data also reveal that Black people are no more likely to commit a crime than any other racial group.

Then there’s the in-depth CBC analysis that found that that more than 36 per cent (19 of 52) of the people killed in encounters with Toronto police between 2010 and 2017, were Black.

Perhaps the assertion was made after considering the University of Toronto study from a few years ago on “resumé whitening,” which found that, when Black job seekers “whitened” their resumés — by altering their listed names so they did not sound ethnic and excising mention of extracurricular activities that might be thought likely to be particularly undertaken by Black people — they were 2.5 times more likely to be selected for interviews.

Perhaps the assertion was made after considering the data that reveal the extreme paucity of ethnic minorities, particularly those who are Black or Indigenous, holding high positions in management in private-sector companies, partnerships, or government. Or, to take an institution that Day would presumably know well, perhaps there was consideration of the Parliament of Canada: of Canada’s 443 parliamentarians, there are a grand total of 10 who are Black. This number, an all-time high in the history of our nation, includes both federal MPs (seven of 338) and appointed senators (three of 105).

And on it goes. It is not difficult to find data proving that Black Canadians are far more likely than any other group in Canada to be the victims of hate crimes. Or that they are nearly twice as likely to be considered low income than non-racialized Canadians. Or that the average income of Black Canadians is about 25 per cent less than that of Canadians who are not visible minorities. All of this is only to speak of the data relating to Black Canadians, since we are in a moment in which consideration of anti-Black racism is at the forefront. Tellingly, however, similar or worse statistics apply to the realities faced by Indigenous people in Canada, and the simple fact is that all racialized Canadians face notable disparities.

Perhaps Day looked into all of this before categorically denying the existence of systemic racism. But it appears not.

During the television appearance, the host challenged this assertion, saying that she did not know it to be true. Day responded by declaring that he did and that he knew this was the case because most of the people he worked with and was acquainted with were not racist. He also seemed to state that he knew about the experience of discrimination, as he had been teased as a child for wearing glasses. The less said about the painful myopia of such a worldview, the better. (Though I will note that, as someone who grew up as a visible minority in Alberta — the province where Day was repeatedly elected — and who also wore glasses from the time I was a small child, I can attest that, as any sane person might expect, the issues that accompany these two things are nothing alike.)

All of this indicates a common and troubling problem with these sorts of reflexive denials. If someone were to consider the abundant data and facts related to this issue and comprehensively analyze it, and nonetheless come to the conclusion that there is no structural or systemic issue with racism in our society, then — as curious as that finding would be — at least a reasoned discussion about the issue could possibly be had. But if someone has not done that work or looked into the empirical facts before making such a sweeping declaration, then the question they need to ask is: Why am I certain that this is the case? Is my sense that this is the way things are just an unsupported feeling? Is it, perhaps, an optimistic projection of the way we hope things are, or is it an indication of something darker — a way of repudiating those who hold the contrary view? No matter the reason, such an unsupported declaration is an illustration of the very notion that it rejects; it is, in fact, proof of concept of systemic racism and of the implicit bias upon which it rests.

That is how implicit bias functions. Taking it at its most benign, the way to view this is to  consider that studies have shown that people are often most comfortable around others with whom they can relate, and, really, with those who remind them of themselves. Unless checked, this natural disposition can cause us to inadvertently favour such people and effectively discount or hinder those dissimilar to ourselves. Ultimately, this results in societal structures that reflect biases against those who are not in the dominant societal group — and then perpetuate this unequal status quo over time. It should be understood that the existence of systemic racism does not mean that everyone is racist, but rather that certain societal structures have been tainted so as to produce – sometimes unwittingly – racist outcomes. So, to return to the example of the resumé-whitening study, it turns out that merely having a non-ethic name confers a sizable advantage in securing employment interviews, and thus employment, even if virtually all other factors amongst applicants are identical. This is a systemic problem: It does not stem from the aberrational individual who wilfully sets out to disadvantage those whom he or she is not like. It is a widespread consequence of implicit bias.

Of course, those aberrational individuals present yet another, more easily recognizable, aspect of societal bigotry.

Take Amy Cooper, the white woman who made the news recently after a video emerged of her calling the police and faux-hysterically claiming that an “African American man” was “threatening” her. The man, who was bird-watching, had politely asked her to adhere to the law by putting her dog on a leash.

The incident occurred in the United States, but, interestingly enough, Cooper was originally Canadian. She went to university here in Ontario. There is little in her actions that appears to have been inadvertent. She clearly seemed to be attempting to orchestrate a racial incident by weaponizing a discriminatory racial dynamic and playing upon issues of policing minorities. As the ongoing protests have thrown into stark relief, the consequences of this could well have proven catastrophic for the birdwatcher, Christian Cooper. When all of this was exposed, Amy Cooper protested that she was not racist — and she undoubtedly believes that to be true. Regardless of her belief, it is notable that, prior to the exposure of this incident, she held a high-ranking position in a leading investment firm. In other words, she was exactly the sort of person who would also have been making hiring decisions and potentially compounding the systemic discrimination that would have been faced by those she interviewed.

When the very notion of such biases and their systemic consequences are blithely dismissed by those in positions of power — by those who outright declare systemic racism nonexistent — these problems are only perpetuated. After all, those who do not recognize that there is a problem will surely not be able to contribute to finding the solution. Indeed, it is difficult to imagine how they could even be minded to do so, even if they are people of personal goodwill, given such a glaring blind spot.

Finally, another of the most common and concerning facets of reflexive, blithe denial of the existence of racial inequality bears mentioning: the vehemence with which such views are often asserted.

As is often the case in such circumstances, Day effectively presented it as an outrage that anyone would dare say that systemic racism existed in Canada. Now this might simply have been the reflexive sniping of political partisanship — Day’s comments came in response to a statement by Prime Minister Justin Trudeau that Canada must reckon with systemic racism. So perhaps the vehement declaration was merely political gamesmanship, with the notion of racial justice being treated as simply another distasteful theatre for unthinking “gotcha” politics. But, regardless of the motivation, the tone adopted reflected aggrieved outrage. It implied that anyone who even suggested that Canada was not exempt from systemic racism was completely beyond the pale — and that the charge that systemic racism might exist in Canada was tantamount to an attack on our country. This framework marginalizes, if not demonizes, anyone who would dare acknowledge systemic racism, and by effectively delegitimizing such voices it would all but ensure that no progress could be made.

We all love our nation. But we cannot use the flag as a blindfold to avoid recognizing hard truths. Grappling with such truths is not somehow unpatriotic. It is the sign of a mature society — one honest enough to recognize when it falls short of its values and that believes in those values enough to at least try to live up to them.

The reality is that, of course, there is systemic racism in Canada. The question is, in this moment of truth, what are we going to do about it? And the answer will be nothing, if we are going to be wilfully blind and hide behind reflexive, unthinking denials that there is a problem in the first place.

Darren Thorne is a constitutional and human-rights lawyer and previously served as the vice-chair of the Human Rights Tribunal of Ontario.