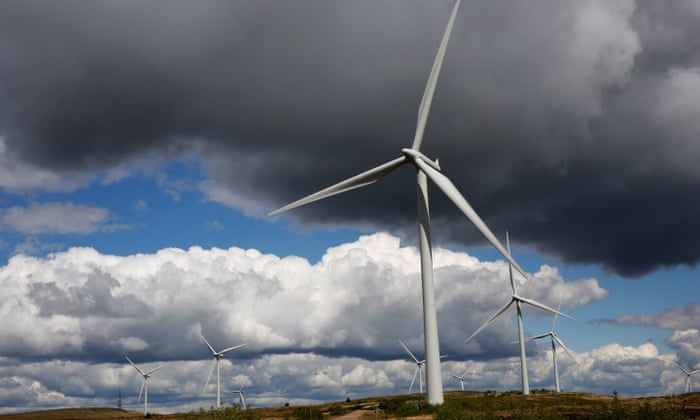 ‘The UK has yet to announce an policy that deals with the environmental emergency and the spectre of mass unemployment.’ Photograph: Murdo MacLeod/The Guardian

Britain needs a green job-filled recovery from the coronavirus crisis. Unlike Germany and South Korea, it is far from clear that we will get one. While Berlin and Seoul are retooling their fossil fuel-reliant economies to be greener and cleaner, the UK has yet to announce a policy that deals with the environmental emergency and the spectre of mass unemployment.

Unless a vaccine for coronavirus is found soon, Britain faces a surge in joblessness at the end of October, when all forms of wage support stop. The size of this spike in unemployment will determine how long it is before we may return to normal. Currently, 12 million people are covered by the job retention scheme for furloughed workers and its equivalent for the self-employed. There are few takers for the idea that there will be a sharp bounce-back to business as usual.

Torsten Bell, who worked in the Treasury when the financial crash struck in 2008 and now runs the Resolution Foundation thinktank, told MPs on the Treasury select committee that if unemployment hits 10%, which is about what the Office for Budget Responsibility estimates, it would take at least seven years to return to where we were before the pandemic struck. If none of the workers being supported by wage subsidies get their jobs back, it could take decades to return to normal.

Sustained unemployment imposes significant economic, personal and social costs: joblessness leads to ill health and reduced life expectancy, and to the undermining of human relations and family life. The state has been playing the role of “insurer of last resort” to keep the economy running, so that it can be restarted once the emergency has passed. A physically distanced economy will be different to the carefree one we were used to. The furlough scheme has helped lower-paid and part-time staff, and it is hard to see all of these workers returning to their roles in the leisure, travel and hospitality sectors.

Yet Boris Johnson was wrong to suggest earlier this month that “many, many job losses” were inevitable. This will only happen if policy choices do not change. The answer to large-scale layoffs is for the public sector to create jobs, especially in those regions where there will be no or few openings, and for such a scheme to be designed to recast the economy in an environmentally sustainable way. Large public spending could transform the economy with an industrial base that would be net zero in carbon emissions.

The harm from climate change is not as immediately obvious as that of the pandemic, but it is bigger and longer-lasting. There are encouraging reports that the Treasury is looking at a “green industrial revolution” to create jobs for those made redundant through the economic fallout from the pandemic. But where’s the beef? Leaving lockdown will not be inherently climate-friendly. Mr Johnson must make it so by decoupling future economic activity from carbon emissions and ecological destruction.