It’s not just a US problem. Canada needs a national database for police use of force and deaths. 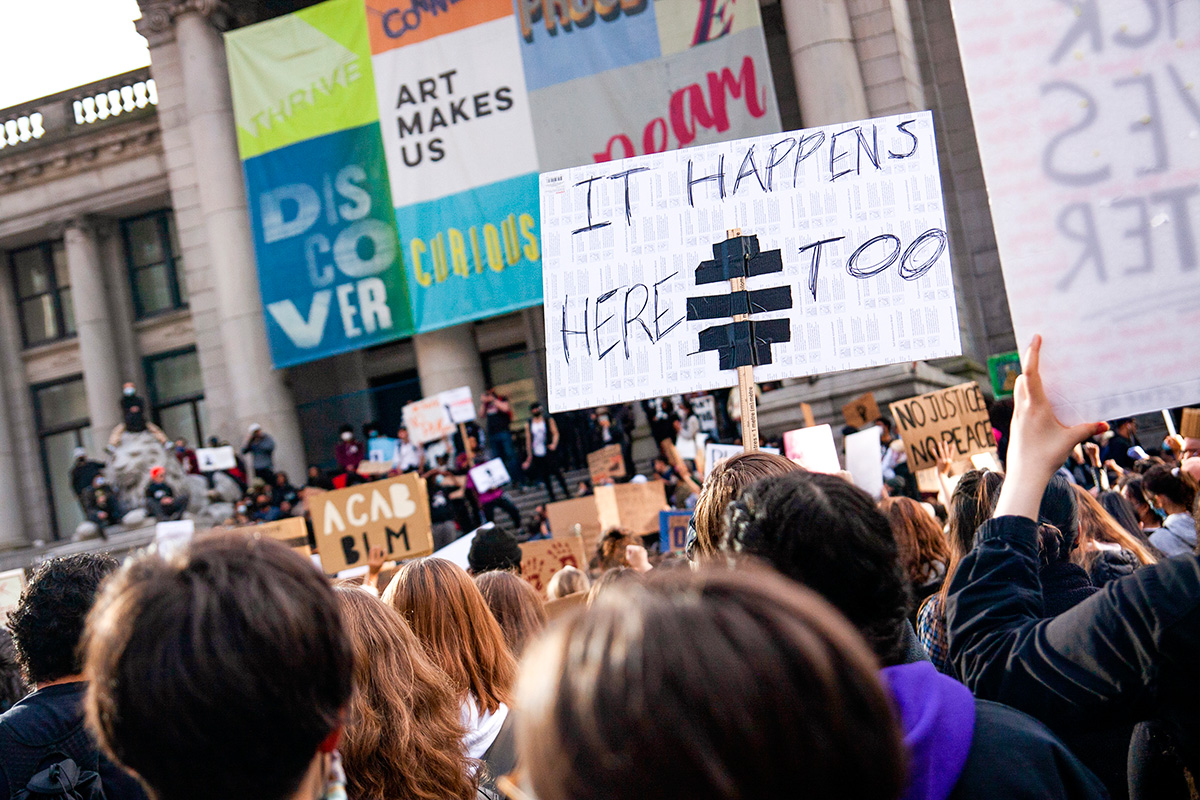 ‘Where there could be information that would help identify and eliminate racism in law enforcement in Canada, there is only a void.’ Photo by Gabriele Woolever from Vancouver protest on May 31, 2020.

Days after George Floyd was killed by a white Minneapolis police officer, Nike released an ad saying, “For once, Don’t Do It. Don’t pretend there’s not a problem in America.” The video is a blunt demand for Americans to reject systemic racism and police brutality.

Canadian viewers need another version — “Don’t Do It. Don’t pretend that America is the only country with a problem.”

Racism is everywhere, and Canada and Canadian police forces are no exception.

On a regular basis, Canadians see evidence of the racial violence perpetrated by American police officers. Floyd’s death is tragically commonplace. In the United States, Black people are three times more likely to be killed by police than white people.

But in this country, there is no official national record of the number of people killed during encounters with police. Police departments do not routinely release detailed statistics about use of force incidents. When they do, it’s not collected based on race, ethnicity or other critical factors.

Where there could be information that would help identify and eliminate racism in law enforcement, there is only a void.

Available statistics are the product of individual reports and studies by researchers, rights organizations and journalists.

And they suggest that Black, Indigenous and other racialized people are also at much greater risk in Canada.

The CBC set out to compile a database of every person who died or was killed during a police intervention from 2000 to the end of 2017. Researchers gathered information on race and ethnicity from a variety of sources and found Black and Indigenous people were severely overrepresented.

In Toronto, Black people accounted for 37 per cent of victims. They make up slightly more than eight per cent of the population.

Other reports have shown similar patterns. In November 2019, the Globe and Mail reported that between 2007 and 2017 more than one-third of people shot to death by the RCMP were Indigenous. Indigenous people make up less than five per cent of the population.

And according to a study by the Ontario Human Rights Commission, Black Torontonians are 20 times more likely to be shot by police than the city’s white residents.

Last week Regis Korchinski-Paquet, a 29-year-old Black woman, died after her mother called Toronto police and asked them to take her daughter to the Centre for Addiction and Mental Health. During her encounter Korchinski-Paquet fell from a 24th-floor apartment balcony. Korchinski-Paquet’s family members said that before she fell, she was calling to her mother for help. The incident is being investigated by Ontario’s Special Investigations Unit.

I am a police officer’s daughter. I know that defending innocent people against violent criminals is a dangerous job, and that in doing their jobs officers sometimes encounter impossible and deadly situations — that’s why they have the legal right to use force when facing serious injury or death.

But lethal force is supposed to be a last resort in a life-or-death situation, not a result of racism.

Society entrusts the police with extraordinary power so that they can do their jobs effectively. In exchange for that power, officers should be held to the highest moral standard, with sufficient oversight to prevent abuse. Police forces exist to serve and protect Canadians and if racial bias — conscious or not — causes an officer to fear a person of colour, to make assumptions about that person’s guilt or innocence, or to treat that person more harshly than they would a white suspect, then that officer is unfit to wear a badge.

Police officers can’t serve and protect people that they fear or see as inferior. And Black and Indigenous Canadians should not have to fear mistreatment or death at the hands of people who are supposed to keep them safe.

Racism must be eradicated from law enforcement, but that can’t happen without accountability. And accountability is impossible when Canadian police forces don’t collect and release information on race and ethnicity in their encounters with the public.

Canada needs a national database that tracks instances of use of deadly force by police officers, and that data needs to be broken down by gender, location and race. Police departments and the RCMP need to release use of force statistics.

Racism kills. And America is not the only country with a problem.