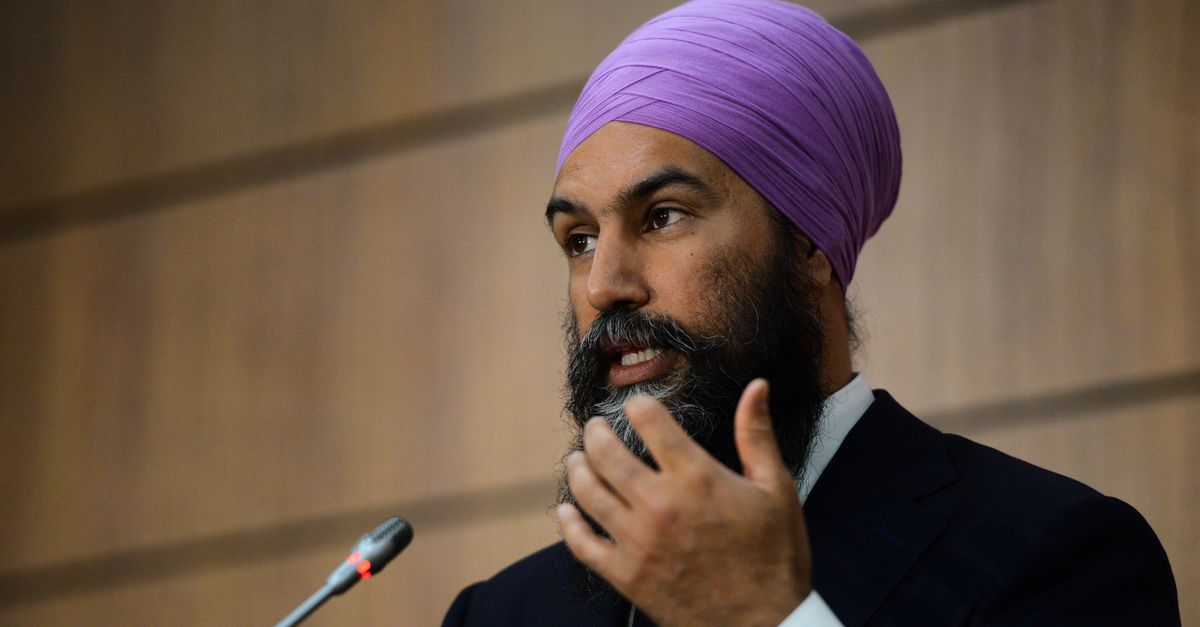 SEAN KILPATRICK/CANADIAN PRESS NDP Leader Jagmeet Singh speaks during a press conference on Parliament Hill during the COVID-19 pandemic in Ottawa on June 10, 2020.

NDP Leader Jagmeet Singh is “appalled” a for-profit long-term care company has committed to pay $10.7 million in dividends to shareholders so far this year, while it spent only $300,000 of its own money on its response to the COVID-19 pandemic.

Extendicare is a Markham, Ont.-based company that owns 69 long-term care and retirement homes in Ontario, Manitoba, Saskatchewan and Alberta and provides contract services to 53 other Canadian long-term care homes.

Extendicare made $1.13 billion in revenue in 2019 and is on track to make more this year, even as the novel coronavirus devastates some of its homes.

The company’s revenue for the first quarter of 2020 was up $6.1 million over the same quarter last year for a total of $268.8 million, according to a press release last month. Extendicare attributed the increase, in part, to government funding provided to help with COVID-19 outbreaks.

This company didn’t just earn profit, but had enough profit where they gave dividends of $10 million.Jagmeet Singh

“It’s exactly why for-profit has no place in long-term care homes… in the same period of time … this company didn’t just earn profit, but had enough profit where they gave dividends of $10 million,” Singh told HuffPost Canada Wednesday. “That’s wrong.”

The NDP leader called it a “stark and compelling” example for why the for-profit model is flawed in senior care.

The chair of Extendicare’s board Alan Torrie told investors the company has no plans to cut dividends at its annual general meeting May 28. Audio of the speeches and discussions at the meeting are published publicly on the company’s website.

At least 80 people have died in Extendicare facilities due to COVID-19, the contagious disease caused by a novel coronavirus.

Extendicare did not respond to HuffPost’s requests for comment.

At the annual general meeting, chief financial officer David Bacon said the Ontario government paid for more than half the costs the company incurred because of the pandemic.

“The expense we incurred was about $700,000 of incremental expenses of which $400,000 was covered with some of the early funding we received in Ontario,” Bacon said.

A spokesperson for Ontario’s Minister of Long-Term Care Merrilee Fullerton said the province sends funding to individual homes, not their parent companies, to help with “extraordinary costs” related to the COVID-19 crisis.

“This funding is intended to support increased operational costs related to screening, staffing, supplies, and equipment necessary to maintaining the health and safety of residents and staff,” Gillian Sloggett said by email. Specific costs could be related to increasing hours for part-time staff, backfilling staff who are sick and doing extra cleaning.

Sloggett said extra funding was sent to Extendicare Guildwood in Scarborough, Ont. in March, April and May.

A union that represents about 5,000 workers at Extendicare homes said it is unacceptable for shareholders to make money off long-term care homes.

“What I heard today from Extendicare was both alarming and an affirmation of a truly ugly long-term care system,” Sharleen Stewart, president of Service Employees International Union (SEIU) Healthcare, said in a statement after the annual general meeting.

“Corporate dividends from companies like Extendicare, Chartwell, and Sienna, can no longer be a part of the delivery of healthcare equation.”

At Extendicare Guildwood in Scarborough, Ont., 40 people — or a quarter of the home’s 160 residents — have died after contracting COVID-19.

Audrey Da Cruz told the Toronto Star her mother died of the disease just two months after moving into Extendicare Guildwood. The only email she received from the company after her mother died was an invoice, she said.

In Alberta, an outbreak of COVID-19 at Extendicare Hillcrest has killed more people than any other care home outbreak in the province. Twenty people had died there as of Monday.

As of Wednesday, 7,900 deaths have been linked to the disease. Its impact has disproportionately affected older Canadians.

Residents in long-term care and seniors’ homes make up 18 per cent of COVID-19 cases, but residents in these homes account for 82 per cent of deaths, according to Public Health Agency of Canada data released last week.

Some care home employees have refused to work in unsafe conditions, creating a staffing shortage in some facilities. The Toronto Star reported last month that COVID-19-related health outcomes have been worse in privately operated long-term care homes than in public facilities.

The situation in some homes got so bad the military had to be brought in to certain facilities. Soldiers documented their observations in a May report that shocked the prime minister and Ontario Premier Doug Ford.

Inadequate training and shortages of personal protective equipment was a common theme that fuelled bad conditions inside the long-term care homes, according to the 15-page report.

Soldiers found shortages of linens; incidents of hypodermic needles being inadequately sterilized and reused; residents being left to sit in soiled diapers; patients’ feeding tubes being neglected for so long that the tubes had become “foul and coagulated.”

“It was hard to get through. It was the worst report, the most heart-wrenching report I have ever read in my entire life,” Ford told reporters last month.

One of the homes in the report, Orchard Villa in Pickering, Ont., is owned by Southbridge Care Homes, but managed by Extendicare.

It is the hardest-hit facility in Ontario with 79 deaths linked to COVID-19.

Soldiers said they found that staff at the home did not follow infection control practices, the building was infested with cockroaches and that they saw one patient choke to death after being fed lying down.

Cathy Parkes told HuffPost that an Orchard Villa staff member refused to give her 86-year-old father oxygen or transfer him to hospital on April 14. He died the next day — but she says she didn’t find out he had tested positive for COVID-19 until three weeks later.

Orchard Villa’s executive director Jason Gay said he couldn’t answer most of HuffPost’s questions about Paul Parkes for privacy reasons but said the home is very sorry for his daughter’s loss.

Singh told HuffPost there are “lots of ways” the federal government can intervene. Getting provinces and territories together to talk about not renewing licences for long-term care homes is one option, the NDP leader said. The Canada Health Act (CHA) sets the conditions that provinces and territories must satisfy for federal funding. Singh suggested the values in the CHA could be extended to long-term care as an added layer of accountability to be requisite for provincial and territorial health-care transfers.

The NDP leader wants to see Prime Minister Justin Trudeau call for the removal of profit from long-term care. It would “go a long way” in sending a message of leadership, Singh said.

The company brands itself as a “leading owner, operator, developer and innovator in the senior living sector” and owns at least 500 properties in Canada, the United States, and the United Kingdom. Revera has been hit with more than 85 lawsuits as of last year.

In April, lawyers filed a class-action lawsuit against Revera claiming the company failed to protect its residents from COVID-19, alleging poor sanitation practices, and inadequate safety measures to curb the transmission of the virus.

Revera is privately operated but owned by a crown corporation called PSP Investments. The corporation is tasked with investing public-sector workers’ pensions.

When Treasury Board President Jean-Yves Duclos was pressed last month to address accusations of negligence happening inside Revera facilities, he kept his distance, explaining the company operates independently from the federal government.