In her re-election campaign, Mayor Anne Hidalgo says that every Paris resident should be able to meet their essential needs within a short walk or bike ride. 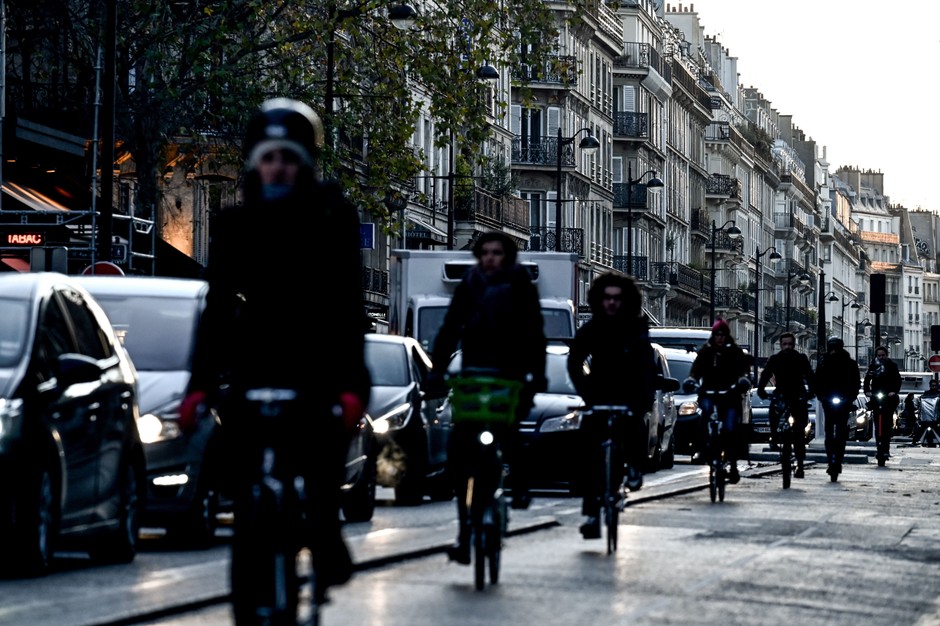 During the city’s transit strike in December, Parisians got a taste of what being a more foot- and bike-oriented city would feel like. Philipe Lopez/AFP via Getty Images

Paris needs to become a “15-minute city.” That’s the message from the manifesto of Mayor Anne Hidalgo, who is seeking re-election this March. Hidalgo has been leading a radical overhaul of the city’s mobility culture since taking office in 2014, and has already barred the most polluting vehicles from entry, banished cars from the Seine quayside and reclaimed road space for trees and pedestrians. Now, she says, Paris needs to go one step further and remodel itself so that residents can have all their needs met—be they for work, shopping, health, or culture—within 15 minutes of their own doorstep.
Even in a dense city like Paris, which has more than 21,000 residents per square mile, the concept as laid out by the Hidalgo campaign group Paris en Commun is bold. Taken at a citywide level, it would require a sort of anti-zoning—“deconstructing the city” as Hidalgo adviser Carlos Moreno, a professor at Paris-Sorbonne University, puts it. “There are six things that make an urbanite happy” he told Liberation. “Dwelling in dignity, working in proper conditions, [being able to gain] provisions, well-being, education and leisure. To improve quality of life, you need to reduce the access radius for these functions.” That commitment to bringing all life’s essentials to each neighborhood means creating a more thoroughly integrated urban fabric, where stores mix with homes, bars mix with health centers, and schools with office buildings.
Paris en Commun has created a diagram to illustrate the concept of what should be available within 15 minutes of “Chez Moi” (home).

Paris en Commun’s 15-minute city concept. From the top, clockwise, the headings read: Learn, Work, Share and Re-Use, Get Supplies, Take the Air, Self-Develop and Connect, Look After Yourself, Get Around, Spend, and Eat Well. (Paris en Commun)

This focus on mixing as many uses as possible within the same space challenges much of the planning orthodoxy of the past century or so, which has studiously attempted to separate residential areas from retail, entertainment, manufacturing, and office districts. This geographical division of uses made sense at the dawn of the industrial era, when polluting urban factories posed health risks for those living in their shadows. Car-centric suburban-style zoning further intensified this separation, leading to an era of giant consolidated schools, big-box retail strips, and massive industrial and office parks, all isolated from each other and serviced by networks of roads and parking infrastructure. But the concept of “hyper proximity,” as the French call it, seeks to stitch some the these uses back together, and it’s driving many of the world’s most ambitious community planning projects.
Barcelona’s much-admired “superblocks,” for example, do more than just remove cars from chunks of the city: They’re designed to encourage people living within car-free multi-block zones to expand their daily social lives out into safer, cleaner streets, and to encourage the growth of retail, entertainment, and other services within easy reach. East London’s pioneering Every One Every Day initiative takes the hyper-local development model in a slightly different direction, one designed to boost social cohesion and economic opportunity. Working in London’s poorest borough, the project aims to ensure that a large volume of community-organized social activities, training and business development opportunities are not just available across the city, but specifically reachable in large number within a short distance of participants’ homes.
Meanwhile, in Portland, Oregon, walking-distance-limited neighborhood planning is seen as central to climate action: The city aims to cover 90 percent of the city in so-called “20-minute neighborhoods,” where all basic needs—with the exception of work—can be reached within a third of an hour of walking time. In Australia, Melbourne rolled out a similar pilot in 2018.Hidalgo’s aspirations for Paris build on this idea, but with a local twist. The goal travel time is reduced to 15 minutes, but bike journeys can count. And while it likewise underlines the importance of stores and doctors, it also includes cultural activities and workplaces within its central aspirations.In Paris, this isn’t necessarily such a tall order. The mayor oversees only the 2.2 million residents of the city’s heavily populated historic core, which already enjoys some of the use-mixing that the 15-minute-city concept encourages, thanks to its pre-industrial roots. Paris would have an easier time with the concept than say, sprawling Melbourne, where more radical residential densification may be in order.

Paris en Commun’s manifesto sketches out some details for what this future walkable, hyperlocal city would look like. More Paris road space would be given up to pedestrians and bikes, with car lanes further trimmed down or removed. Planning would try to give public and semi-public spaces multiple uses—so that, for example, daytime schoolyards could become nighttime sports facilities or simply places to cool off on hot summer nights. Smaller retail outlets would be encouraged—bookstores as well as grocery stores—as would workshops making wares using a “Made in Paris” tag as a marketing tool. Everyone would have access to a nearby doctor (and ideally a medical center), while sports therapy facilities would be available in each of the city’s 20 arrondissements.

To improve local cultural offerings, public performance spaces would be set up, notably at the “gates” of Paris — the large, currently car-dominated squares around the inner city’s fringe which once marked entry points through the long-demolished ramparts. Finally, Paris would be populated by a network of “citizen kiosks”—booths staffed by city employees that would offer not just information, but also community cohesion services. Think places where you can drop off and pick up keys, join a local club or buy compost for your balcony plants.Paris en Commun provides some glimpses of what this more self-sufficient, neighborhood-oriented city might look like. The (imaginary) triangular intersection below resembles the current state of many in Paris; there’s some public pedestrian space, but it remains hemmed in by cars, both mobile and parked, and genuinely safe space for pedestrians is limited.
After a superblock-style transformation, several neighborhood streets have been stripped of cars and no longer act as through-routes. This frees up room for new public space, with a small park at one end and a produce garden for residents at the other. New trees, green roofs and balconies, and a fountain would help mitigate the heat island effect and make the area a more pleasant place to linger. Meanwhile, the crossing space has ballooned in size, providing greater priority for pedestrians.
In December, transit strikes in Paris in protest of national pension reform gave Parisians an accidental taste of what a 15-minute-city future would look like, at least in terms of the hugely enlarged volume of cyclists on the city’s roads while bus and Metro service was halted. At some points during the strikes (which are still ongoing), bikes started to outnumber cars by two to one—a premonition of what might be to come.
Still, piecing together an entire modern working city around this 15-minute rubric would pose a challenge. In addition to its residents, central Paris attracts vast numbers of tourists who must be fed, housed and transported from neighborhood to neighborhood. Millions more commute into the city for work on regional transit from the vast greater Paris metro area. The people living in self-sufficient squares like the one above might find their rents rise along with the charm. And Paris can’t be transformed into a city that solely serves the needs of affluent locals.Just how Hidalgo would execute the infrastructural changes required remains to be seen. She appears well-positioned to stay in City Hall: She’s leading in the polls (and one of her rivals has pulled out of the race after a sex scandal). Her office has not announced any specific budget or timetable for the 15-minute city concept, which remains perhaps more of a rough blueprint for the future than an imminent makeover, should she be re-elected in March. As a rethink of the way cities should be planned—and exactly who they should serve, and how—it’s an idea that other cities are likely to watch with great interest.