The coronavirus lockdown gave a glimpse of what cleaner cities can look like, but as people turn to private cars for safety from infection, pollution could soar 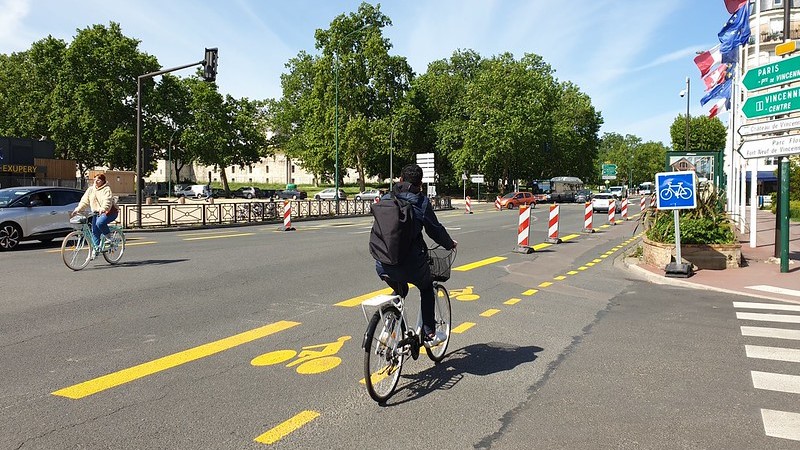 Paris announced the creation of at least 50 kilometres of temporary bike lanes during the lockdown. (Photo: Camille Gévaudan/Flickr)

As large swathes of the world start to reopen after weeks of coronavirus lockdown, urban planners are rethinking how to build future-proof cities.

The lockdown emptied the roads and cleared the skies over the world’s largest and most polluted cities. It opened a window on what cleaner cities could look, sound and smell like.

At its peak in early April, the slowdown of road, rail and maritime transport contributed the largest drop in global emissions – just under half of a 17% daily fall in CO2 emissions, according to a study published last month in Nature.

Now restrictions are lifting, while the risk of infection puts people off public transport, a shift to private cars threatens to send emissions rocketing. Global emissions have already bounced back to just 5% below pre-pandemic daily levels.

City authorities have a challenge to make sure commuters can travel to work at a safe distance from each other.

Many mayors have promised to rebuild greener and fairer. From Mexico City to London and Bogota to Milan, plans for hundreds of kilometres of new bike lanes have been announced – strengthening a pre-pandemic movement to reduce car dominance.

Nearly 40 members of C40, a network of major cities working to address climate change, committed to use the recovery to drive investments in “excellent public services” and increasing community resilience against future threats, including climate change.

This will require a holistic approach, going much further than a few cycle lanes.

“Cycle lanes shouldn’t be an end in themselves – they are a means to live differently,” Carlos Moreno, scientific director of the Entrepreneurship, Territory, Innovation chair at Sorbonne University in Paris and a planning advisor to mayor Anne Hidalgo, told Climate Home News.

Moreno believes the transformation of cities needs to align with a pathway to holding global warming to 1.5C, the tougher target of the Paris Agreement. To achieve that, the best available science says global emissions need to nearly halve by 2030 and reach net zero by 2050.

“We have 10 years to radically transform our cities,” he said.

To live within today’s climate, biodiversity and public health constraints, Moreno argues for an overhaul of urban design to bring essential services closer to people’s homes. People get around by foot or cycle and streets are redesigned not merely as places of transit but as “living spaces”.

The pandemic compelled local authorities in densely populated areas to reclaim streets for public use: entire road sections were pedestrianised in Tel Aviv, pavements enlarged in Auckland, parking spaces became bikes lanes in Tirana, and restaurants were encouraged to use outdoor spaces for dining in Vilnius.

Janette Sadik-Khan, former transport commissioner for New York city, said the move would have been considered  “almost revolutionary” a decade ago.

“This is a historic moment when cities can change course,” she wrote in a report by the National Association of City Transportation Officials which she chairs. “Empty lanes… form the outline of the future cities we need to build,” she said.

While there is clear public support for policies that would maintain air quality improvements, private cars are still perceived as the Covid-safe transport option.

“It would be naïve to think the pandemic is going to lead to the death of the car, in a context where public transport is associated with risk,” said Tim Schwanen, director of the Transport Studies Unit at Oxford University’s School of Geography and the Environment.

Comment: Coronavirus shows why we need an economy designed for wellbeing

The swing back to private cars is a serious concern, he told CHN. In the absence of holistic transport policies, it could cause emissions to rebound sharply.

A spike in air pollution would aggravate any future respiratory pandemic. Researchers established a link between long-term exposure to PM2.5 air pollution, much of which comes from diesel cars, and a higher death rate from Covid-19.

Yet in Wuhan, ground zero for the pandemic, car sales boomed to unprecedented levels when the city reopened after being sealed off for weeks.

An Ipsos survey in March found 66% of Chinese respondents used private cars after lockdown, compared with 34% before the outbreak. Use of buses and public transit dropped from 56% to 24%.

The study also found an uptake in people’s intention to buy a car – a trend so stark it is likely to foreshadow a similar rise in other parts of the world, Schwanen said. Early indications suggest this could already be happening.

Data published by Apple Maps on searches for directions to travel by car shows notable increases compared with volumes recorded on 13 January – a 16% rise in the US and 14% in Germany.

“Cities cannot do without public transport. It’s absolutely vital that it is brought back to some forms of normality within the constraints of public health,” Schwanen said.

“There’s no reopening cities w/o reopening transit,” tweeted Sadik-Khan in response to guidance to employers by the US Centers for Disease Control and Prevention (CDC) suggesting incentives for staff to drive private cars to work.

The CDC telling workers to drive alone assumes that everyone owns a car and that cities can handle the traffic.

This is a fever dream.

There’s no reopening cities w/o reopening transit. Ruling it out doesn’t make it safer. https://nypost.com/2020/05/29/cdc-says-workers-should-avoid-mass-transit-like-mta/amp/ …

There are some positive signs the recovery to Covid-19 could help accelerate the transition to low-carbon transport.

Germany’s economic rescue package, which includes €5.9billion to incentivise electric vehicles and supporting infrastructure, was hailed as a “watershed moment” by local media. Notably, the government snubbed the powerful carmaker lobby’s calls to extend a buyer’s premium to petrol and diesel cars.

The UK, which is presiding over next year’s UN climate talks, has made the move to zero-carbon road transport one of five key themes for Cop26.

Electric cars are not the whole answer. While they pollute less than fossil fuelled cars, they take up the same amount of space, causing congestion.

Yet without government intervention, it could take years for public transport usage to resume to pre-pandemic levels, as confidence in the safety of the networks has eroded, Mike Lydon, of the urban planning firm Street Plans, told CHN.

“Political leaders need really strong messaging about the reality and safety of using public transport,” he said. “A lot of people assume it’s a big risk to take public transport but maybe it’s not as big a risk as they think.”

The emphasis on cycling facilities serves a vocal constituency that is “middle class, young and mostly white,” Schwanen said. This risks failing to cater for more vulnerable communities.

“We are far from doing really inclusive transport planning. Given the speed at which things are taking place, this is not given the thought and attention needed,” he added.

It is a political issue.

In the US, calls to “defund the police” are gaining ground. A rallying cry at “black lives matter” protests, it reflects the fact that policing has come to dominate city budgets. Proponents argue public safety would be better served by investment in community-based services, which could include urban redevelopment.

In Paris, the transformation of urban mobility has become a key issue in this year’s mayoral election.

Moreno, of the Sorbonne University, has a vision of a capital where people can access all their needs, including schools, workplaces, supermarkets, hospitals, green spaces, culture and sports facilities, within 15 minutes of their home by walking or cycling. 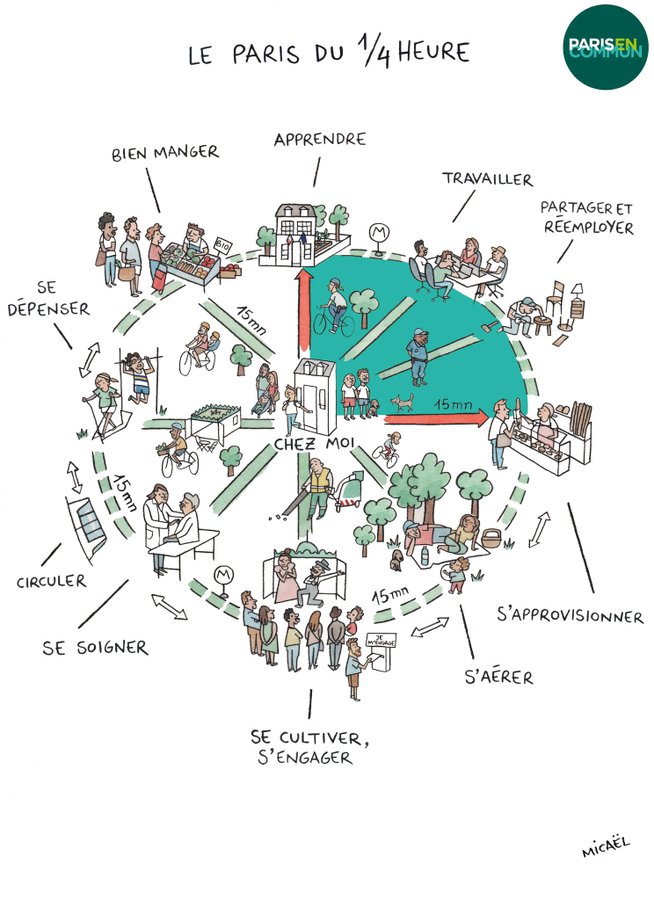 School playgrounds are open at the weekend as green spaces, every street includes large pavements, cycle lanes and vegetation with reduced space for cars and water fountains are used to cool down the city on increasingly hot days caused by global heating.

Mayor Hidalgo made the ambitious plan the backbone of her re-election campaign, describing it as “the condition for the city’s ecological transition”. The idea has inspired other cities including Melbourne, Vancouver and Milan to develop similar proposals.

“Environmental and health issues need to be addressed at the local level,” Hidalgo said during an online event on the city’s recovery last month. “In this vision for a 15-minute city, I believe there is a solution for tomorrow.”