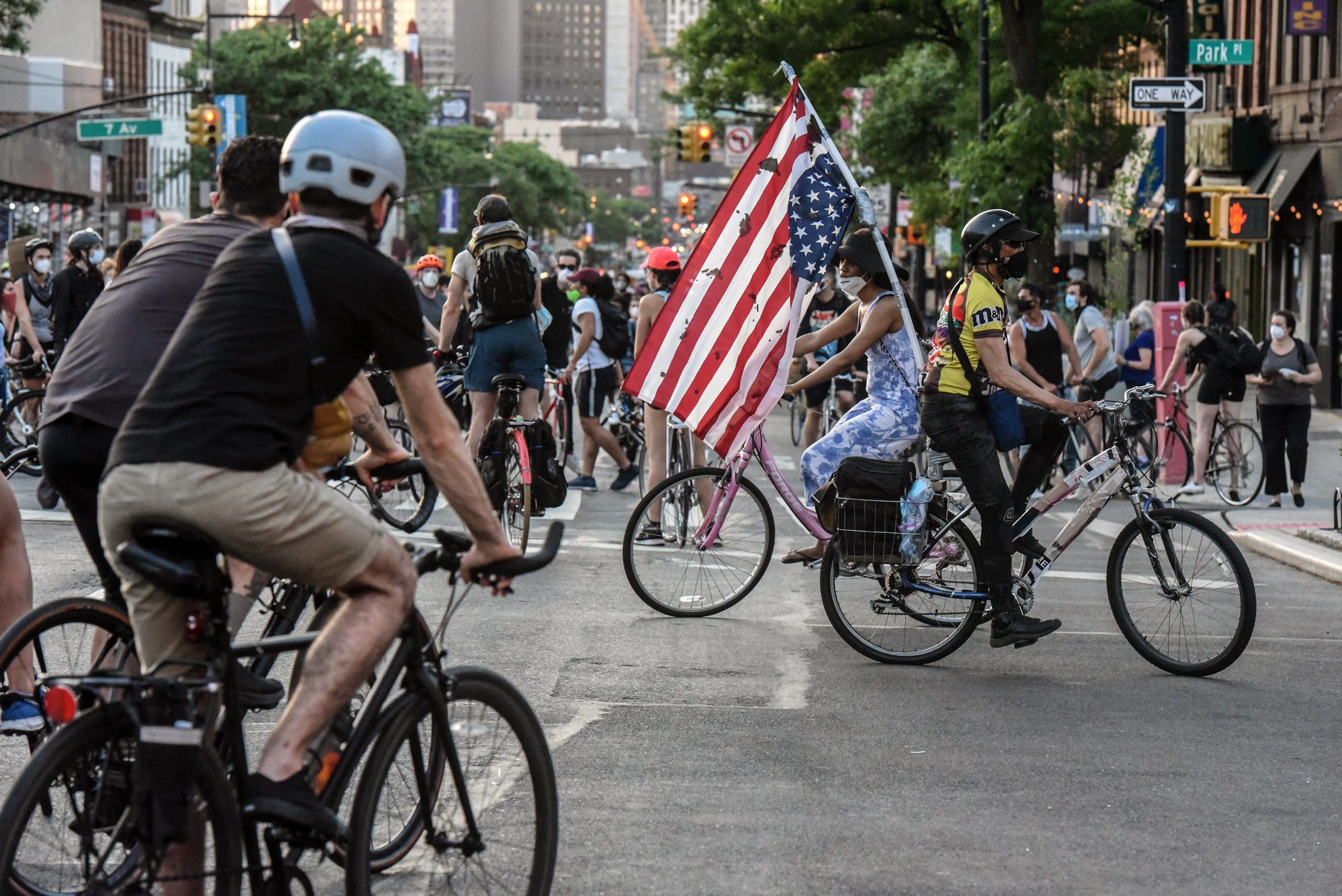 Bicycles are powerful things—inexpensive, versatile tools that can be used by dissenters to sneak up and speed off, to organize and mobilize and elude.Photograph by Stephanie Keith / Getty

A week ago, on Wednesday night, the third night of a citywide curfew in New York, police officers were seen confiscating bicycles. Posts on social media described N.Y.P.D. officers violently seizing bikes from peaceful Black Lives Matter demonstrators, who were continuing to march in defiance of the 8 p.m.. lockdown. In one widely shared video clip, a jittery camera captured a cop wheeling an apparently commandeered bike; a woman can be heard screaming at police, asking why bikes are being taken, and how protesters are supposed to travel home. Another piece of viral footage, retweeted by Representative Alexandria Ocasio-Cortez, among others, shows three policemen clubbing a cyclist with batons on a Manhattan street. It’s unclear whether the man was arrested, or what became of his bicycle.

In the days that followed, the N.Y.P.D’s anti-bicycle actions continued. On Thursday, Catherina Gioino, a reporter for the Daily News, tweeted that police had been ordered to “focus on the bicyclists.” Newsday’s Matthew Chayes said in a tweet that police had proclaimed that bicycles were “not allowed” and that bike-riding after the curfew would result in an “automatic collar.” Other online posts documented arrests and violent attacks on cyclists, including journalists with press credentials. The city’s first curfew since the Second World War had been imposed, according to Mayor Bill de Blasio’s executive order, to curb “assault, vandalism, property damage, and/or looting.” New Yorkers were left to wonder how scenes of cops beating protesters and snatching their bikes—or, in some cases, leaving the bikes littered on the street—squared with the stated objectives.

These incidents were troubling but not exactly surprising. The N.Y.P.D. has a long history of hostility to cyclists, especially cyclists who are also left-leaning activists. For years, police have used questionable, sometimes violent tactics to sweep up participants in Critical Mass, the guerilla group rides that aim to promote cyclists’ rights. In 2010, a former N.Y.P.D. officer received a felony conviction for body-slamming a Critical Mass rider and filing a false criminal complaint in an attempt to frame the cyclist. That same year, the city agreed to pay a settlement of nearly a million dollars to eighty-three Critical Mass riders who had been wrongly detained or arrested between 2004 and 2006.

In the de Blasio era, the N.Y.P.D. has engaged in sporadic crackdowns against bicyclists, issuing tickets and confiscating bikes. (Journalists and cycling advocates have charged that these “ticket-blitzes,” which often follow incidents in which cyclists are maimed or killed by automobiles, are a form of institutionalized victim-blaming.) Many recent police actions have been directed at cyclists of color. De Blasio and the N.Y.P.D. have waged a years-long “war on e-bikes,” seizing hundreds of the throttle-control bicycles, issuing summonses, and levying fines, a campaign that almost exclusively hits a workforce of immigrant food-delivery people, who are among the most vulnerable of the city’s working poor. The N.Y.P.D. have also targeted “ride-outs,” group rides that are popular with young black and Latino cyclists. Cops have reportedly broken up the events by ramming mopeds into bicycles, and have trumpeted the confiscation of teen-agers’ flashy BMX bikes on the social-media feeds of police precincts.

The conflict between law enforcement and cyclists is hardly restricted to New York. Bicycles have played a starring role in the nationwide uprising that has followed George Floyd’s death at the hands of Minneapolis police officers two weeks ago. In Los Angeles, San Francisco, Portland, Chicago, Atlanta, Miami, and dozens of other cities, protesters have pedalled and marched with their bicycles, facing off with police who, in many cases, are also mounted on bikes. The omnipresence of bicycles may be due, in part, to where the demonstrations are taking place, and who is doing the demonstrating. The bicycle is, supremely, a city vehicle; teens and young adults, who make up a sizable percentage of the protesters, are among the most enthusiastic urban cyclists.

But the visibility of bikes in the protests also reflects a larger trend. In 2020, we are experiencing what is likely the greatest bicycle boom in at least a half century. Several factors have contributed to the bicycling revival, but the spectre of climate change and other crises gripping the globe are certainly part of the equation. In an ecologically imperiled, rapidly urbanizing, traffic-shackled twenty-first century, the zero-emissions two-wheeler has reëmerged as a darling of urbanists, policymakers, and commuters. The boom has transformed American cities with new bicycle infrastructure, bike-share programs, and other pro-cycling initiatives. A further surge of bicycle commuting has accompanied the coronavirus pandemic: bike riding is an excellent way to maintain social distance, to swiftly navigate the city while avoiding buses and subways. The National Association of City Transport Officials has reported an “explosion in cycling” since the outbreak of the virus; huge increases in sales have left bike shops with a shortage of stock.

One thought on “The Bicycle as a Vehicle of Protest”