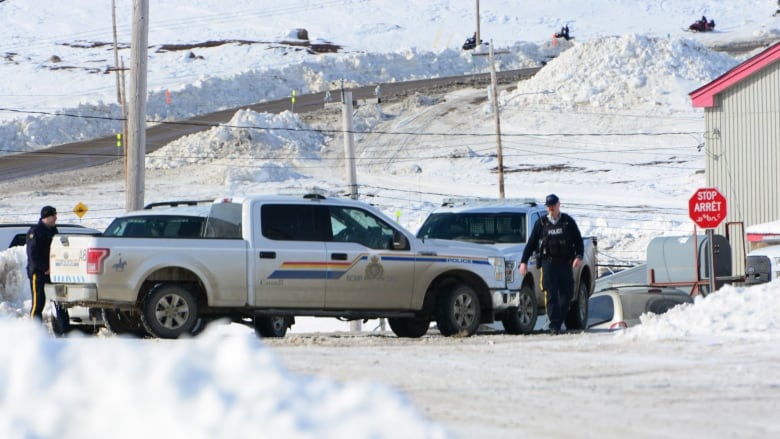 Police attend a disturbance that unfolded in Apex, Nunavut, on April 11, 2020. Policing in the territory has come under increased scrutiny, including a call for a review to be done by the Civilian Review and Complaints Commission for the RCMP. (Patrick Nagle/CBC )

To address the systemic racism against Indigenous people shown by police forces such as the RCMP, Canadian leaders need to look at how different government agencies contribute to that racism, say some Indigenous leaders.

Those leaders spoke to CBC News in response to more than 30 cases of alleged mistreatment of Inuit women by the RCMP. The cases were compiled by the Legal Services Board of Nunavut, which alleges widespread racism and abuse of Inuit, especially women, across the territory.

The board has called on the Civilian Review and Complaints Commission for the RCMP (CRCC) for a territory-wide review of policing.

Aluki Kotierk, the elected leader of Nunavut Inuit, is one of the people calling for a review. This issue hits close to home, she said. The recent death of a man in Clyde River during an encounter with an officer who discharged their firearm reminded Kotierk of her late uncle, Solomon Uyarasuk, who died in police custody in 2012.

Kotierk said the coroner’s inquest into her uncle’s death left her with doubts and anger, in part because the Ottawa police investigated the death on behalf of the RCMP. Such investigations of police investigating police lack independence and therefore credibility, she said.

“It probably will always exist in my life, in terms of my own distrust of the system. But I also know that I’m not alone in those feelings of anger and distrust,” Kotierk said.

Building people up rather than criminalizing them

Kotierk said an examination of the bigger picture beyond the RCMP is needed to understand the high rates of violence and officer-involved deaths in the territory.

“There needs to be a more holistic discussion about all of the different ways in which public agencies are able to work together to build up Inuit so that we can actually achieve what we set out to achieve in the creation of Nunavut.”

The legacy of colonization of the Inuit has left many feeling devalued, voiceless and overwhelmed to the point where some turn to violence, Kotierk said.

To address that violence, leaders and government agencies need to look at an individual’s life and experiences before the violence itself, she said.

“That [way], we’re building people up again, rather than criminalizing people. It starts feeling as though by being born an Inuk, your life is worth less than others.”

The over-criminalization of Indigenous people in Canada has been a direct result of racism for generations, Pam Palmater, a lawyer and professor of Mi’kmaq descent who lives in Toronto, told CBC News.

Indigenous people are overcharged by police and are grossly overrepresented in jails, but the police can’t be responsible for that on their own, she said.

Palmater said multiple public inquiries and commissions over the years have shown that prosecutors request longer sentences for Indigenous defendants, and once in the corrections system, Indigenous prisoners have less access to parole and rehabilitation programs than their non-Indigenous counterparts.

“The entire system works against Native people,” she said.

The Supreme Court of Canada’s 1999 Gladue decision was meant, in part, to address the overrepresentation of Indigenous offenders in jails, but it hasn’t had that effect, Palmater said.

Judges are part of that bias against Indigenous people, she said.

While they are not allowed to interfere politically or make public comments on cases they’ve ruled on, they can comment when they are adjudicating cases and could use that opportunity to alert governments to systemic injustices, Palmater said, especially at the Supreme Court level.

“Without justices making those kinds of comments or condemning it more forcefully, then governments will think that they can continue to allow it to happen. And then, of course, police unions will continue to back up this bad behaviour.”

The CRCC released a report in 2017 detailing abuse and sexual harassment experienced by its own female members.

“If they would treat their own members … in an intimidating, bullying, harassing way … imagine what they would do to people without that power, who are oppressed, dispossessed, marginalized and living literally at the edge of society,” Palmater said.

The Department of National Defence has had its own issues around sexual harassment and gender discrimination, Palmater said. Last year, the Federal Court approved a $900-million settlement for members of the military and employees of the department who were victims of sexual assault and misconduct.

“When you don’t address the problems of toxic male sexualized and racialized violence against females … this is going to be allowed to continue,” Palmater said.

Read the other stories in this series:

That genocide, Palmater said, requires the implicit co-operation of institutions across government agencies and their collective inability to address gendered racism.

Palmater said she has heard reports from across the country of Indigenous people who have been arrested and charged but were then abused by police and had their charges dropped by Crown prosecutors before the police abuse is aired in open court.

But the Public Prosecution Service of Canada does not collect data that would confirm these experiences, she said.

“If we had data, we could argue just how prevalent it is,” she said. “And we could also hold the Crown to account because if they are aware of police excessive use of force … then you would think they would have a legal obligation to … actually go after the police officers that are involved and make sure they are properly dealt with.”

Collecting meaningful data is one of the two biggest barriers to addressing systemic racism against Indigenous people, Palmater said.

The other big obstacle, she said, is political will and leadership.

Human rights organizations and international watchdogs have told the Canadian government for years that it needs to collect racialized and gendered data in order to address the systemic violence against Indigenous women, Palmater said.

Most recently, the United Nations special rapporteur on violence against women issued a report that highlighted this lack of data in Canada and called for action, she said.

“If governments don’t collect data, they can deny that a problem exists.”

Political will and leadership could make it mandatory for government agencies —such as the Public Prosecution Service of Canada and the RCMP — to collect meaningful data, Palmater said.

But so far, that leadership and will have been lacking, she said.

“We know Indigenous women are going missing and murdered,” she said. “They’re exploited sexually; they’re victims of domestic violence. And If you fail to act, you’re just as guilty.”

Palmater said she and other advocates have been bringing this to the attention of governments for years — and before them, others tried.

“We know the whole system is infected with racism, and we are not tackling it — and it’s Indigenous women and girls that suffer, as well as Indigenous men and boys.”

Thomas Rohner, Reporter. Thomas Rohner is a reporter based in Iqaluit, where he’s lived for nearly six years. His special interests as a journalist include the criminal justice system and investigative reporting.