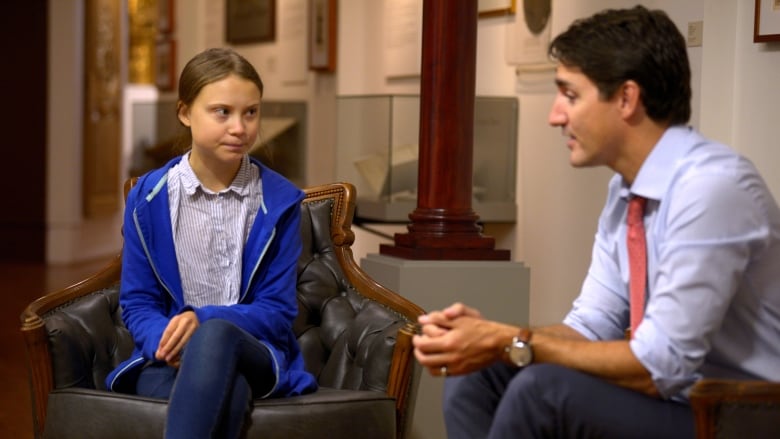 Teenage climate activist Greta Thunberg is urging developing island countries to use the upcoming United Nations Security Council election as leverage to push Canada and Norway to step up their games on climate change.

The 17-year-old from Sweden has become one of the most recognized climate activists in the world with her climate strike movement growing into a global phenomenon last year.

She is the headline signatory on a letter to UN ambassadors of small island developing states, which says that Canada and Norway both give lip service to climate action but remain steadfast in their commitment to expand fossil fuel production and subsidizing oil companies.

“For the young generation who will inherit the consequences of these decisions, it is critical that those who claim to be leading on climate action are held to account for decisions they are making back at home,” the letter reads.

Three other youth climate activists and 22 global climate scientists also signed the letter, including Eddy Carmack, a recently retired Fisheries and Oceans Canada scientist who was awarded the Order of Canada this year for his work on climate change.

‘Unite behind the science’

The letter asks the ambassadors to raise the issue with Canada and Norway “and demand that they unite behind the science” of climate change, commit to no new oil and gas exploration or production and phase out their existing production.

Canada is going up against Norway and Ireland for the two seats available in next week’s election to the UN body. Prime Minister Justin Trudeau has devoted a lot of political capital to trying to win the spot.

With most European countries expected to side with their continental neighbours, Canada has put its effort into wooing countries in Africa, Asia and the Caribbean, including most of the more than three-dozen island countries targeted by Wednesday’s letter. Trudeau has spoken or met directly with the leaders of nearly one-third of those countries since February.

Norway and Canada both have economies heavily based on oil and gas. Ireland has very little fossil fuel production and last year committed to ending oil and gas exploration altogether.

Thunberg first expressed her discontent with Canada’s climate policies directly to Trudeau last September, when the two met in Montreal on the same day hundreds of thousands of Canadians took to the streets as part of a global climate strike.

In their letter, Thunberg and the others say that Canada is nowhere close to hitting its Paris climate agreement targets. They also say Canada is the second-biggest supplier of fossil fuel subsidies among the world’s wealthiest 20 countries and has opened up billions of dollars in loans to fossil fuel companies as part of its COVID-19 economic aid.

Oil companies have been particularly hard hit from a combination of plummeting demand for oil products, and a production war between Saudi Arabia and Russia that flooded the world with more oil at a time it was already using less.

For major oil companies, and other big corporations, to qualify for the loans, Canada does require them to show a climate plan and how their business is helping Canada meet its emissions targets.

The letter writers said if Canada was serious about implementing the Paris agreement it would make permanent its temporary ban on extracting oil and gas in the Arctic, cancel both the Trans Mountain and Keystone XL pipeline projects and end all subsidies to the oil and gas industry.

They give Canada credit for promising to make climate change a regular part of the Security Council’s discussions, and push for it to create a new special representative for climate security.

The letter writers are also critical of Norway for continuing to increase oil and gas exports, saying Norway now exports 10 times as many emissions as it produces domestically. They point out there is a vote on June 12 in the Norwegian parliament that could increase tax benefits for oil companies as a response to the COVID-19 pandemic. The letter says Norway should eliminate, rather than expand, those tax benefits.