83 per cent of long-term care deaths in eastern Ontario were in privately run facilities, data reveals 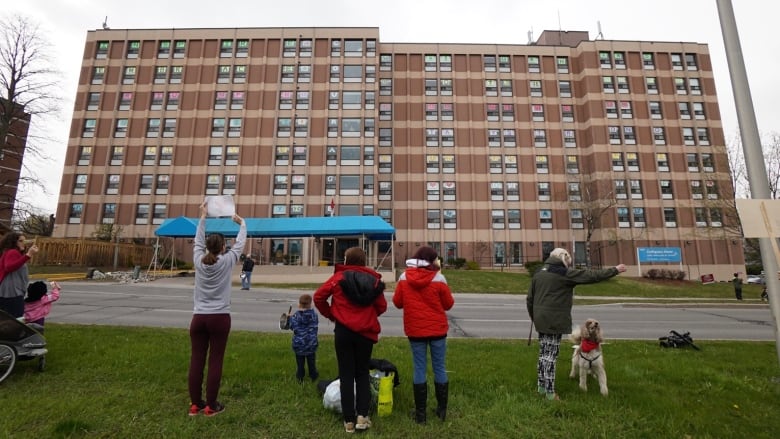 People show support for staff and residents at Ottawa’s Carlingview Manor long-term care home, a for-profit facility owned by Revera that has experienced 61 deaths due to COVID-19. (Francis Ferland/CBC)

The risk of dying from COVID-19 has been significantly higher for residents of for-profit long-term care homes in eastern Ontario than for those in non-profit and municipally run facilities, a CBC analysis of provincial data has found.

Since the coronavirus outbreaks first struck dozens of long-term care homes across the region this spring, the vast majority of deaths — 82.5 per cent — have occurred in for-profit facilities.

The hardest-hit for-profit homes in eastern Ontario are in Ottawa, but the home that saw the highest mortality rate per number of beds is Almonte Country Haven, where close to 37 per cent of the residents died from COVID-19.

Rick Spencer’s daughter lives at Almonte Country Haven. Eryn Dixon, 45, has multiple sclerosis and is profoundly disabled. She contracted the virus in March.

“She was unconscious and unresponsive for a while, and they had her on high-flow oxygen,” Spencer said. “They called us in for the final goodbye.”

His daughter pulled through and has now fully recovered, but according to a database kept by Ontario’s ministry of long-term care, 30 of 82 residents at Almonte Country Haven eventually succumbed to the respiratory illness.

There are no clear conclusions as to why there have been more deaths in for-profit nursing homes in eastern Ontario.

A CBC Marketplace analysis of COVID-19 deaths in nursing homes in Ontario points to older buildings with shared accommodations as one possible cause.

Carlingview Manor, Extendicare Laurier Manor and Almonte Country Haven are all housed in older buildings with four-bed wards that may have made it difficult to isolate patients and control infection.

However, new facilities haven’t guaranteed positive outcomes when it comes to COVID. Some of the region’s more modern nursing homes have been hit hard, including Ottawa’s Madonna Care Community, where there have been 46 deaths, and the Montfort Long Term Care Centre, where 30 residents have died.

There are plans for renovations and an addition at Almonte Country Haven to bring it up to current standards, but that has yet to begin. Its owner, OMNI, says it’s waiting for government and financial approvals.

“We hope to commence construction this fall on renovations that would eliminate 4 bed wards in our home altogether,” said OMNI CEO Patrick McCarthy in an email to CBC.

“It is unfortunate that it has taken so long to move this forward. We have been advocating for over a decade as members of the Ontario Long Term Care Association to have older homes updated to modern design standards that are more suitable for today’s seniors.”

The Ministry of Long-Term Care told CBC in a statement it has invested $1.75 billion “specifically to bring aging long-term care homes up to modern standards and build badly needed new capacity…. We are putting our money behind this.”

Dr. Amy Hsu, an investigator at the Bruyère Research Institute in Ottawa, said there are other variables at play, including the amount of proactive COVID-19 testing that’s being done, as well as staffing levels and the frailty of residents before the outbreak.

Hsu noted most of the outbreaks occurred in urban areas in Ontario.

The quick spread of the virus at Almonte Country Haven and at the Pinecrest home in Plantagenet, Ont., which saw 11 deaths, are rural outliers.

Long-Term Care Minister Merrilee Fullerton announced in May that an independent commission will provide guidance on how to improve the long-term care system and better protect residents and staff from any future outbreaks.

Hsu said in the meantime, continuing testing of residents and staff will be vital.

“With adequate testing we can actually equip the homes to address and to actually prevent the spread once they have identified a positive case,” Hsu said.

Ongoing testing of staff and residents is now the norm at Almonte Country Haven, according to its owner.

“We rely heavily on the up-to-date information that ongoing testing provides as it is crucial for our care team and their ability to act quickly and respond accordingly to COVID-19,” McCarthy said.

The data on deaths in eastern Ontario long-term care homes came from the province’s COVID-19 website on Tuesday, June 9, and was analyzed using the profit status for each home available on Ontario’s long-term care reports website.

Julie Ireton, Senior Reporter. Julie Ireton is a senior reporter who works on investigations and enterprise news features at CBC Ottawa. She’s also the host of the new CBC investigative podcast, The Band Played On. You can reach her at julie.ireton@cbc.ca
RELATED: