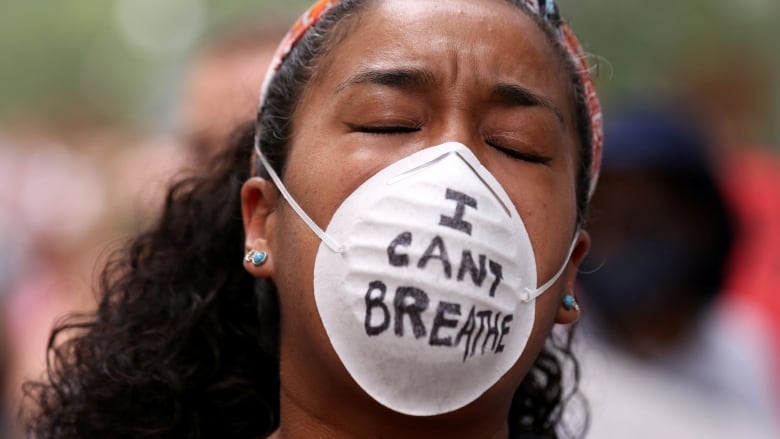 The death in Minneapolis police custody of George Floyd last month was a call to action for many but also left people across the U.S. and around the world with a deep sense of futility and sadness, another brutal reminder of the overt and systemic racism Black people experience and feel on a daily basis. (Jonathan Bachman/Reuters)

Two weeks ago today, George Floyd, a Black man, was killed by a white police officer in Minneapolis. Bystander video captured the moment Floyd’s life ended under the officer’s knee, which had been pressed tight against his neck for a full eight minutes and 46 seconds.

That video lit the fuse on a powder keg of anger and frustration across North America and around the world. It was for many a call to action. It left others with a deep sense of futility and sadness, another brutal reminder of the overt and systemic racism Black people experience and feel on a daily basis.

Those same feelings swept through our newsrooms at CBC. At the same time, our audience, fed up with racism and white-dominated media, demanded accountability.

After days of detailed live coverage of U.S. protests by CBC News Network, we made a series of errors last Sunday morning. We broadcast video of police vehicles driving into crowds of protestors in New York City. The script was poorly worded and mischaracterized the events, framing them mostly from the police perspective. Our team realized this and improved the language, but when we rebroadcast the clip, we had a technical production error that cut the video short — not showing the final moments when the police drove into the crowd.

That’s all it took.

Someone edited a side-by-side comparison of the original footage with our video, posted it to social media, and within days, we were an international meme and “proof” of the media’s complicity with police. The audience reaction on social media was fierce and unrelenting.

It did not matter that we had corrected, apologized, ran the full video multiple times after the error and before it was ever pointed out. We apologized again. But as I told our staff in an internal note, intent and workflow do not matter when it comes to this story or matters of race.

The expectation is simply that we get it right. Every time. And that’s a fair expectation.

We didn’t meet that expectation last week. With the scrutiny on our work at its highest level, we owned up to some examples where our storytelling was one-sided, or missing perspectives, or nuance, or sensitivity.

The pain is real

On the inside of CBC News, many of our staff were reeling. People of colour told us the Floyd story is personal and deeply felt. The pain is real. Our mistakes laid bare their long-held complaint that we aren’t moving fast enough to ensure our workforce — from entry level to leadership — looks like the country we serve. How can we ever deepen our awareness and understanding of race if more people of colour, more Indigenous people, more women, more people with disabilities, aren’t in positions of power and influence throughout our newsrooms?

And we heard complaints, not new, that our interpretation of CBC’s journalistic standards and practices (JSP) is so rigid it can muzzle within the organization important voices and lived experiences. Do our definitions of objectivity, balance, fairness and impartiality — and our insistence that journalists not express personal opinions on the stories we cover — work against our goals of inclusion and being part of the community and country we serve?

This question will be among the thorniest to untangle, for I believe strongly that our adherence to the JSP is the central reason CBC News is one of the most trusted news organizations in Canada. But I’m equally convinced that being open to this conversation and looking at the JSP through the prism of inclusivity will result in greater clarity for staff and managers, a mutual understanding of JSP intent and greater trust.

The central question we face: Can our journalists be active citizens of the world without compromising their objectivity?

We will make other changes, big and small at CBC News, Current Affairs and Local Services:

And in addition, we announced a change to our Language Guide that will see us capitalize “Black” when we refer to racial identity or culture, as we did with the word “Indigenous” a few years ago.

We are committed to change.

But the overriding objective is that the inside of CBC News mirrors the makeup of the country we serve. Only then can our storytelling truly reflect the many interests, sensitivities, beliefs and viewpoints found in Canada.

Brodie Fenlon is editor in chief and executive director of daily news for CBC News.