Police-reform ideas are now all the rage. One violence-scarred U.S. city offers a potential roadmap 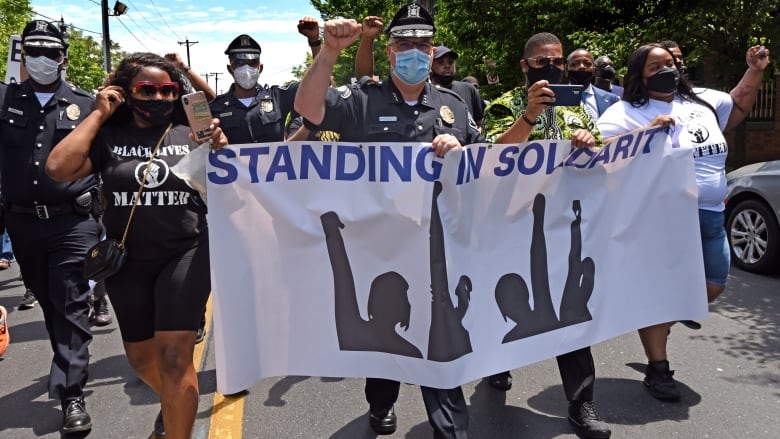 Yolanda Deaver, left, organized a Black Lives Matter protest May 30 in Camden, N.J., and the local police chief, Joe Wysocki joined her in leading it. The community has undergone a major shift in policing and embraced a more collaborative model. (April Saul via AP)

Ideas for police reform are percolating throughout the United States and beyond amid a wave of protest. In one of the more radical proposals, Minneapolis city council has begun moving to dismantle the local force.

City councillors said Sunday they intend to disband the local police department, though there is no consensus yet on what to replace it with.

To people in one U.S. community, this kind of reform is already old news.

He came decades ago to start a community organization in Camden, N.J., a city once known as the most dangerous in the United States, long plagued by sky-high murder rates and myriad open-air drug markets.

What Main witnessed while living there was one of the most radical imaginable experiments in police reform.

The entire force of cash-strapped Camden was disbanded a few years ago and reconstituted with a new mentality drilled into its officers: community service.

Out went the urban-warrior attitude. In came the guardians. The new departmental policy said officers would no longer be judged by their number of arrests and tickets.

Instead, they were told to patrol on foot, mingle with residents, and build a reservoir of trust to draw upon in a crisis.

Residents of Camden, located near Philadelphia, say it’s been successful. Murders are down by two-thirds since the year before the police reform, and overall violent crime is down nearly half.

“[The reform] was pretty controversial,” said Main, a Vancouver native who has lived since 1988 in Camden, where he founded the faith-based group he still leads, Urban Promise.

“[But it] has been really positive. It’s encouraging, in moments like this, to see some of the fruit of that hard work.”

The woman who led Camden’s recent Black Lives Matter march, Yolanda Deaver, runs a hair salon. She said officers will frequently pop into her shop to ask how she’s doing.

Officers even set up a barbecue stand near her aunt’s house and organize regular community cookouts, she said.

When she announced plans for the protest late last month, an officer reached out and asked to participate. Word got around, and the police Chief Joseph Wysocki wound up joining in.

At the event, Deaver said she asked the chief to hold a banner and lead the march with her.

“The chief said I set the tone,” she said in an interview.

“But he set the tone. Because he didn’t come in with riot gear.”

Camden’s troubles traced those of black America in the last half-century. It was once a bustling industrial hub, home to Campbell’s Soup, RCA, and early television manufacturing before the city was walloped starting in the 1960s by a triple-whammy: de-industrialization, riots, and a drug epidemic.

Now it’s on the leading edge of another trend — police reform.

Calls for change are echoing across the country, with numerous bills being proposed at the state and federal level during a wave of protest prompted by the death of George Floyd, who died under the knee of a Minneapolis police officer on May 25.

Several polls suggest Americans support protesters’ demand for reform. That’s amid scenes of demonstrators being hit and gassed; police ransacking a medical station set up by protesters; and an elderly man in Buffalo being shoved to the ground and bleeding from the head.

WARNING: GRAPHIC CONTENT Video shows two police officers in Buffalo, New York, shoving a 75-year-old man to the ground. The sound of a crack is heard and blood trickles from the man’s head https://reut.rs/2Y9eLF0

Even staunchly pro-police media are joining the conversation.

In just one hour, on Friday morning, Fox News ran a segment on police reform; later showed video from Buffalo of the bleeding 75-year-old man; and had a panellist predict that change is inevitable.

“I’ve been saying for the last several years …  ‘American policing is at a crossroads.’ No one would listen to me,” Mike Cutone, a former Massachusetts officer and Army veteran, told Fox News in an interview about his new work in community-policing training.

“Well, we just ran over that crossroad sign. American policing has to have some innovation.”

An investigation by American Public Media three years ago concluded that 34 states did not require officers to undergo de-escalation training, to learn strategies for bringing calm to tense moments.

An attitude shift is well underway in some places.

A major report four years ago by the Washington-based Police Executive Research Forum discussed how certain tactics were going out of vogue among U.S. police forces — such as shooting at moving vehicles, or considering anything within 21 feet a potential threat.

A key principle: slowing down interactions. Instead of trying to resolve crises quickly and move onto the next call, officers should seek to buy time, said the report — it encouraged them to keep a distance from suspects, and begin interactions not with an order, but with a question.

The idea is that time is an ally in restoring calm and rational decision-making. The report also offered advice for clearer communication with emergency dispatchers, and with families of mentally ill people.

It concluded that police recruits get way too little training in defusing tension.

The first principle mentioned in the report, however, involves an attitude, not a tactic: it says police forces must treat human lives as sacred.

For example, when he played on the street with friends, he said officers would shoo them away without asking if they had elsewhere to play.

The town was so dangerous, and public spaces in such disuse, that Little League baseball disappeared there for 15 years.

One incident sticks out in particular for Rodriguez.

He was running a grocery errand for his mom at age 12. Police were seeking a man with a gun — an adult. Rodriguez was small, even for a pre-teen.

He said officers stopped him, shoved him against a wall, frisked him, put him in a police car, and drove him away.

When they realized they’d made a mistake, he said, they just drove him back and dropped him off where they’d found him.

“No apology,” said Rodriguez, who now works with a community organization that provides shelter to unaccompanied, undocumented minors.

“They just went on their merry way. … That’s what makes it difficult for some of us to trust the police.”

A documentary funded by the Justice Department during the Obama era chronicles Camden’s post-2013 reform effort.

Some officers in the video describe their initial resistance to the changes — but said the emphasis on a slower pace, and more empathy, has really worked.

He said the city should still be investing more in community services and relationship-building. That’s the idea driving some of the protesters’ calls to defund the police and shift money elsewhere.

Pushback and the role of unions

Some officers say changes have already gone too far.

Critics of police reform have argued that de-escalation tactics put officers at risk — and that a more aggressive approach is necessary in a country with so many guns.

Police unions have been known to vigorously push back on attempts at reform or officer discipline.

For example, in just the last few days, 57 officers refused to remain on the Buffalo riot squad after colleagues were charged in the injury of the elderly man.

Their mass-walkout came after the Buffalo police union reportedly said it would stop paying legal fees for officers connected to current protests.

Union contracts have an impact on the street, some researchers say.

Different research projects — one at the University of Chicago, and another involving University of Victoria researcher Rob Gillezeau — found that violent incidents involving police increased with new collective bargaining.

“I’m getting some pushback from my union on the concept of de-escalation,” former Minneapolis Police Chief Janeé Harteau said in the Police Executive Research Forum report.

“We’re going to have that resistance, because how do we undo the training drilled into people and the mindset they have had for 20 or 30 years? It’s going to be tough.”

She made that comment four years before an officer, in her city, with a long history of complaints, knelt on the neck of Floyd, and killed him, unleashing a wave of rage that rippled across the U.S. and beyond, with such intensity that it now threatens the entire Minneapolis force.