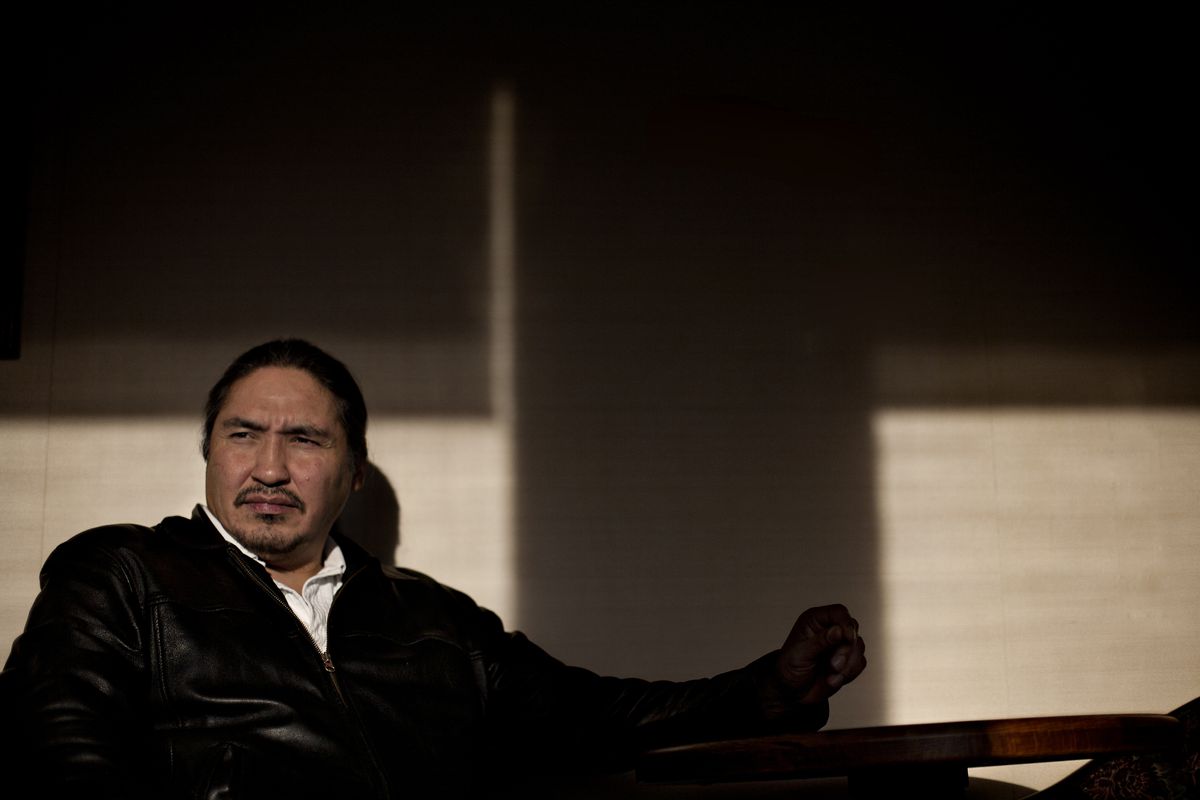 Chief Allan Adam of the Athabasca Chipewyan First Nation says he was brutally beaten by RCMP officers and his wife manhandled after they left a popular casino-nightclub in Fort McMurray, Alta., on March 10, the kind of alleged police violence that he argues happens all too frequently to Indigenous Canadians.

Chief Adam, who was recently re-elected to a third term and espouses strong partnerships with companies in the oil sands, told The Globe and Mail RCMP officers beat him up and roughed up his wife, Freda Courtoreille, over an expired licence plate.

Chief Adam provided a photograph to The Globe that he took after he was released from police lockup that shows a bloodied and bruised face. The chief and his Edmonton lawyer, Brian Beresh, say video evidence of excessive use of force that was taken by a civilian will be presented at a news conference on Saturday in Fort McMurray.

Chief Adam is calling for an outside police force to investigate and for the Mounties to turn over their own video evidence to investigators and the media.

RCMP headquarters in Ottawa referred the matter to the Alberta division in Edmonton, which disputed the chief’s allegations of excessive police force.

“During the course of the arrest, Mr. Adam was resisting the members and, unfortunately, to bring the situation under control, the members were required to use force to effect the arrest,” Fraser Logan, the Alberta RCMP’s media relations manager, said in a statement to The Globe. “This incident was captured on the in-car video system in the police vehicle…and it was determined that the members’ actions were reasonable.”

Chief Adam faces charges of resisting arrest and assault of a police officer. The RCMP said it would not release its video because “this is a matter before the courts.”

Mr. Beresh challenged the RCMP to release the video, which he has seen and said it shows excessive force. He compared what is shown in the video to what happened to George Floyd, the Black American who died from police violence in Minneapolis.

The RCMP is failing in Nunavut

“We want the police video to be made public because that shows an officer arriving on the scene, without any notice, without any inquiry, making a tackle and a number of punches [thrown], which is similar to George Floyd,” Mr. Beresh said. “In the police video, one can make out him [Adam] saying, ‘I cannot breathe,’ … so show the video, but they will not want to do that.”

Chief Adam said the incident happened in the early hours of March 10, when he, his wife and his niece left the Boomtown Casino. They got in their truck – with his wife as the designated driver – and were waiting for a friend to join them when they noticed an RCMP vehicle behind them.

Chief Adam said he did not realize the licence plate and registration of his truck had expired on Jan. 31. He had just picked it up from the police pound, where it had been for 60 days after his daughter was stopped for driving without a licence and Chief Adam had reported it stolen.

As Ms. Courtoreille was about to drive away, Chief Adam said an RCMP officer knocked on the window, and when she rolled it down, he put his arm inside, put the vehicle in park and told her the truck was not moving anywhere.

Chief Adam, who identified himself as chief of the First Nations community, which is well known in the area, said he got out of the truck to explain to the officer that he just picked it up from the police pound and wasn’t aware the licence plate had expired.

“And now he says, ‘I have had enough of this,’ and he grabs my wife, takes my wife out of the vehicle and puts my wife in a famous RCMP hold [arm-lock in the back]. And my wife suffers from rheumatoid stage 4 arthritis. She is just starting to recover and feel good and everything, and they tried to put her down on the ground and put handcuffs on her,” he said.

“I am watching this whole thing and I say, ‘Hey wait a minute, stop.’ And he looked at me and he said, ‘Get back.’ He told me to get back. I said, ‘No way. You let my wife go right now. If not, you will get it,’ I told him. Right then, he let my wife go and I told my wife to get in the vehicle and she went running into the vehicle and I told that cop you don’t have no way to touch my wife.”

He said that while his friend was trying to calm him down in the back of the truck, Ms. Courtoreille got out to talk to the officer, but he “grabbed her again, put her in an arm-lock and slams her against the truck.”

Chief Adam broke down in tears as he described what happened.

“I am the chief and I am watching the RCMP manhandle my wife and I am supposed to protect her,” he said. He said he persuaded the officer to let his wife return to the vehicle, at which point, other police cars arrived.

Chief Adam said the same officer grabbed him by the arm and was leading him to an RCMP panel truck when a second officer “out of nowhere … just clothes-lined me and knocked me down and cut my face and everything.

“I thought I was going to go unconscious, and then I noticed I was gushing with blood coming out of my mouth. And when I was gushing with blood, something said [to me], ‘Don’t pass out. Wake up, wake up.’ So I came through, and that is when I felt someone hitting me from the back side and pulling my head and extending my arms,” he said.

While he was handcuffed in the police van, Chief Adam said other officers grabbed his wife out of the truck.

“Then they hauled my wife out of the truck and, based [on] what I have seen on the video, he was reaching for his handgun. And this is my wife,” he said. “They had her in an arm-lock and they put handcuffs on her and they took her to the police cruiser and told my wife she was charged with obstructing justice.”

A supervising officer arrived and released Ms. Courtoreille without charges. But Chief Adam was taken to the RCMP detachment, where he was charged with resisting arrest and unlawful assault of a police officer.

Chief Adam said he did not come forward right away on the advice of counsel and because he was involved in developing COVID-19 pandemic plans for his reserve.

He is a survivor of sexual and physical abuse at the Holy Angels residential school in Fort Chipewyan.

“I know how it feels like to be a victim. I know what it feels like to resist and fight back and say it will never happen again and, unfortunately, it happened to me again,” he said. “I see our young people across Canada get beat up by RCMP and city police and I think to myself, who speaks for them?”

By Robert Fife, with a report from James Keller