Demonstrators marched in Ottawa and other communities from coast to coast, protesting racism and police brutality following the death of George Floyd in Minneapolis, Minn 0:55

Canadians came out by the thousands Friday for protests and vigils for the black lives lost at the hands of police.

The demonstrations follow days of protests across the U.S. over the death of George Floyd in Minneapolis, Minn., after a police officer kneeled on his neck for nearly nine minutes.

Minneapolis on Friday banned chokeholds and neck restraints by police and now requires officers to try to stop any other officers they see using improper force.

Prosecutors on Wednesday expanded their case against the officers who were at the scene, upgrading the charges against Derek Chauvin, the officer who pressed his knee on Floyd’s neck, to second-degree murder, and charging three others — Thomas Lane, J. Kueng and Tou Thao — with aiding and abetting murder.

All four were fired last week. Chauvin’s treatment of the handcuffed Floyd spurred worldwide protests and calls for police reform.

A video of an aggressive arrest in Nunavut that sparked an investigation is among the recent arrests in Canada sparking questions about use of force, police funding and interactions with black and Indigenous Canadians. 2:05

Friday’s marches come after rallies of a similar theme have taken place already this week in Saskatoon, Sydney, N.S., Burlington, Ont., and Calgary, among other locations.

Amid the COVID-19 pandemic, Canada’s Chief Public Health Officer Dr. Theresa Tam on Friday urged demonstrators to “take care of themselves” and follow public health guidelines such as physical distancing as much as possible and using hand sanitizers.

Read on to see what’s happening around Canada.

Thousands of demonstrators chanting “I can’t breathe” and “Enough is enough” flooded through downtown Ottawa on Friday afternoon, demanding an end to police brutality and anti-black racism.

The No Peace Until Justice march began on Parliament Hill and wound up at the U.S. Embassy. The embassy’s Twitter account said its lights would be dimmed for nine nights in Floyd’s honour, acknowledging that the gesture was small and not enough.

The event touched off some online controversy about who was welcome to attend.

The group said it opposes all streaming and the taking of videos or photos of the demonstration to protect the identity and safety of those attending.

Prime Minister Justin Trudeau attended the Ottawa demonstration. Trudeau declined to say Friday morning whether he would attend, but arrived on Parliament Hill mid-afternoon with security guards, wearing a black cloth mask to protect against the coronavirus.

The prime minister kneeled on the ground at one point, in solidarity with the anti-racism demonstrators gathered on Parliament Hill.

He also clapped and nodded his head when a speaker said that everyone must choose to be either “a racist or an anti-racist.” Some in the crowd urged him to stand up to U.S. President Donald Trump.

Delsin Aventus, one of the organizers of the rally, told CBC Toronto that protesters hope to create dialogue between the community and civic leaders about issues of racism and violence.

“Today started as a march in solidarity both with lives lost both to racism and unfortunately some to police,” he said.

As the protest wound through city streets, the crowd stopped near the intersection of Bloor and Yonge to sing happy birthday to Breonna Taylor, a 26-year-old emergency medical technician from Kentucky who was shot eight times by narcotics detectives who knocked down her front door in March. Today would have been her 27th birthday.

Friday’s march comes after thousands of people took part in a rally downtown last Saturday to protest racism around the world and to demand answers in the death of 29-year-old Toronto resident Regis Korchinski-Paquet.

At Friday’s march, Toronto police Chief Mark Saunders could be seen on one knee with protesters, though some have criticized police officers kneeling with demonstrators as ringing hollow, considering reports of police violence at protests in recent days.

Organizers said the purpose of the gathering is to honour those lost to police brutality in Canada and around the world, and encouraged people who were attending to respect public health protocols by maintaining a physical distance of at least two metres because of COVID-19.

They also asked people who couldn’t be there in person to join from home.

“If physical attendance cannot be met, we ask that you light a candle in memory of our siblings lost to white supremacy and police brutality,” organizers said in the Facebook event page. “We ask that attendees bring posters and signs with names lost and keep their names in your prayers and thoughts. We as a collective are grieving.”

Demonstrators at a Black Lives Matter rally in Regina were silent for eight minutes and 46 seconds before erupting into the lyrics of Amazing Grace.

Abdi Gure, the vice-chair of the African Canadian Resource Network in Saskatchewan, said the silence was very emotional.

“I just can’t imagine what George felt, when a police officer had his knee … more than eight minutes and he was crying for help and for a chance to breathe, I can’t imagine how painful that is,” said Gure.

Gure said problems in Canada and Saskatchewan are not as severe as those in the United States, but are still prevalent.

“We are meeting every day young people who are isolated from the community, who are born here, raised here in Saskatchewan, in Canada, and who can’t still belong to this country,” said Gure.

There were cheers from the crowd when Regina police Chief Evan Bray said, “Black lives matter.” He said he felt the need to say he was sorry.

In downtown Vancouver, thousands rallied at the Olympic cauldron for a peaceful protest aimed at addressing racism in Canada’s school system.

Callender-Prasad said he believes some protests have turned violent in the United States because citizens have reached a breaking point. He hopes the protests in Canada will help stop that feeling.

The event focused on the issue of black lives, as well as the recent deaths of Indigenous people in encounters with police.

In Kelowna, hundreds gathered in Stuart Park. Some attendees took turns on the microphone to share stories of lived experience or solidarity in regards to the fight against racism.

Another powerful speaker at the Kelowna #BLM protest. Speaking to a crowd of about 300 people. One of many people sharing stories of lived experience, solidarity or calling for change. 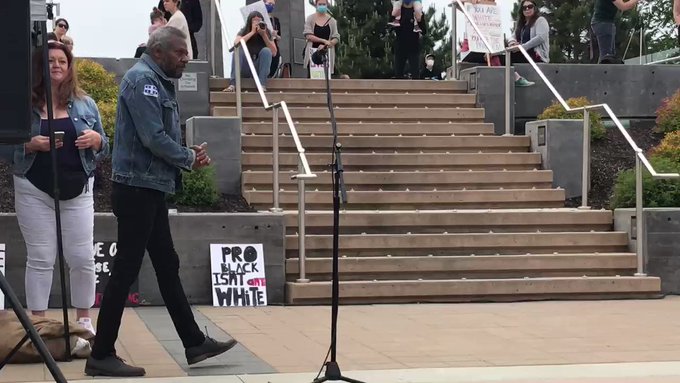 Many people wore face masks, and some carried signs that read, “No Justice No Peace,” and “Black Lives Matter.”

Friday’s march comes after hundreds marched in Moncton on Monday.

Hundreds marched through the streets of Charlottetown. Before the march, demonstrators were encouraged by the Black Cultural Society of P.E.I. to dress in black in a gesture of solidarity.  Keeping COVID-19 health concerns in mind, demonstrators were also reminded to wear masks and gloves and to remain some two metres apart.

“It’s been hard, I can’t lie. It’s been a real emotional roller-coaster, you know, since the news broke of George Floyd. Another name we’ve had to add on the back of the T-shirt that we’re all wearing,” said demonstrator Tara Reeves.

“We need to address the systemic racism and the genocide that our country has been built on. It’s bigger than one more black person being murdered by the police.”

In the Nunavut capital, demonstrators stood in a circle and took an eight-minute-and-46-second moment of silence.

“We want to bring that conversation to the forefront and create the space to have an honest conversation,” Clayton Greaves — a board member of Nunavut’s Black History Society, which helped organize the protest — said about anti-black racism.

“We know that these conversations are not easy…. We’ve been very comfortable for very long time, and we’ve seen the appalling situations happening, and everybody would agree in their separate corners that this is wrong.”

Greaves said racism, colonialism and oppression are issues felt in Nunavut, and thanked Inuit partners for giving the black community the space to express this. Greaves added that Nunavut has a rich black history, something the group wants highlighted.

Hundreds of people gathered at Waverley Park in Thunder Bay, Ont., for a Black Lives Matter rally on Friday afternoon. The gathering was peaceful, with participants carrying signs with messages like “Black Lives Matter” and “Racism is a Canadian Problem,” while chanting “Black lives matter” and “No justice, no peace.”

Because of the COVID-19 pandemic, participants wore face masks, and the City of Thunder Bay had earlier painted circles on the grass to encourage physical distancing.

No city officials made speeches, and police presence was minimal, with cruisers blocking off nearby streets for traffic control.

A rally organized by Justice 4 Black Lives was held at the Manitoba Legislature.

The group released a list of demands directed at city and provincial leaders, which include defunding the Winnipeg Police Service.

“This is definitely a historical moment. You can see the change happening before your very eyes. You can see that all the protests in America are working,” said Jayda Hope, one the rally organizers, on CBC News Network.

“We’re definitely making progress, but this is just the beginning. We need people to know that as we make progress, we are getting there, but we have a long, long, long list of people who need justice, and it doesn’t stop here.”

A rally was held at the Alberta Legislature in Edmonton, which organizers emphasized the protest would be peaceful.

“Our goal is to fight for equity and that’s across all systems that have historical trauma,” said Morrel Wax, who is with Black Lives Matter YEG, one of the organizing groups. 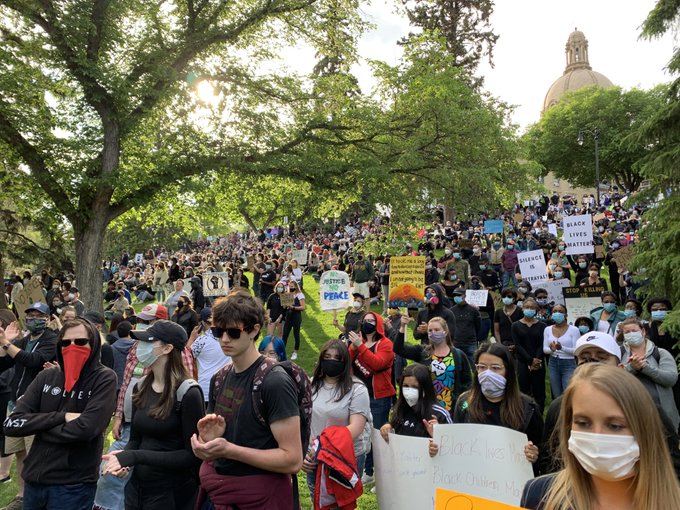 A vigil was held in Repentigny, north of Montreal, where police have also been accused of racial profiling.

Many attendees shared testimonials of being profiled.

Repentigny police Chief Helen Dion took a knee during a minute of silence, and offered to speak to the crowd. Organizers declined, but spoke with her privately.

Meanwhile, amid growing calls for reforms, Montreal police Chief Sylvain Caron said the force will announce a policy for street checks next month, on July 8, in response to a report last year that found black and Indigenous people were four and five times more likely to be stopped by police and asked to identify themselves.

Caron also said Friday he would participate in a protest planned for Montreal on Sunday if organizers invited him.

Soon after Caron’s gesture, he received that invitation from Nous sommes la ligue des noirs nouvelle génération, one of the groups behind Sunday’s demonstration.

With files The Canadian Press and The Associated Press

Photos: Canadians march in honour of black lives lost at hands of police