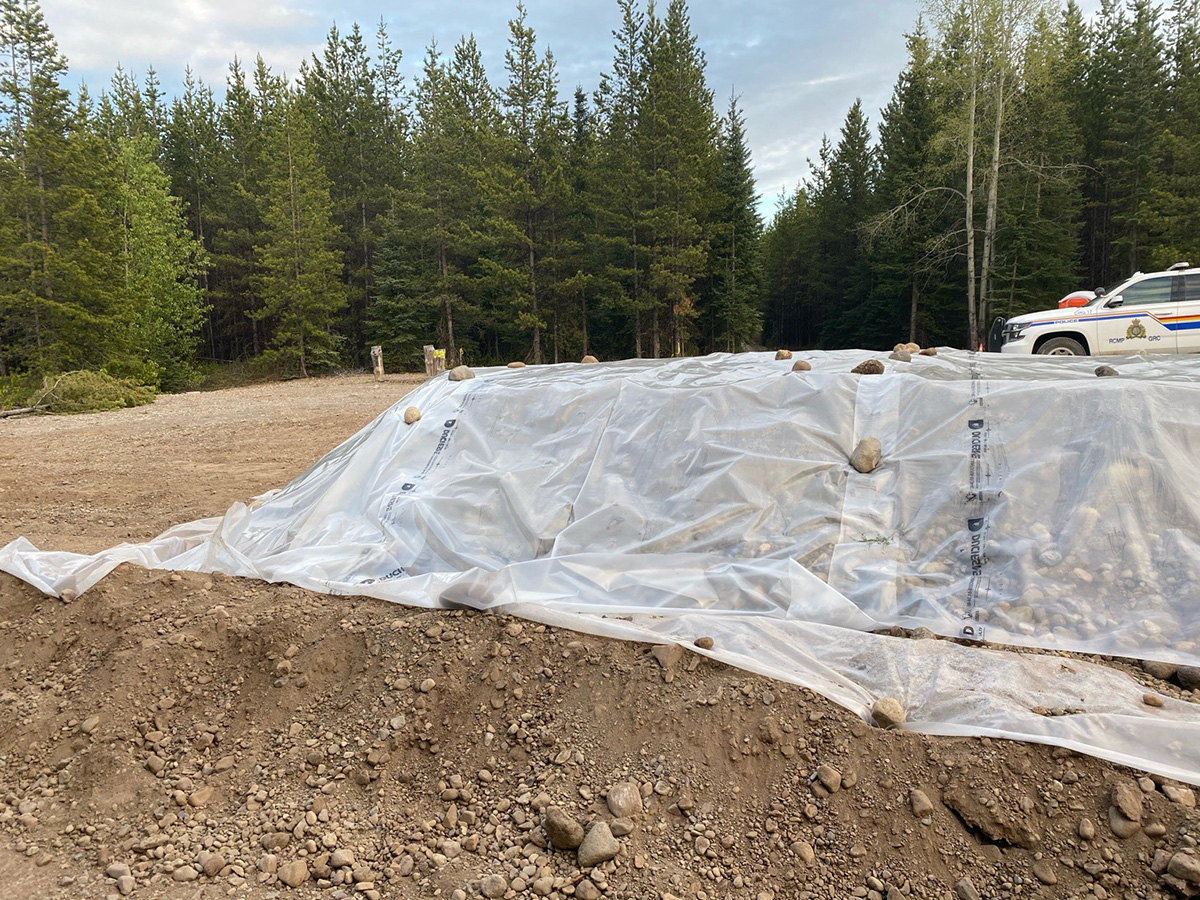 The Office of the Wet’suwet’en is investigating two fuel spills on its territory, both located near the Morice Forest Service Road where conflict over the Coastal GasLink pipeline has erupted in recent years.

Each spill is estimated at about 500 litres. One is at the RCMP’s Community-Industry Safety Office, which was set up last year to patrol pipeline protests in the area, and the other was reported at a work camp for the Coastal GasLink pipeline.

“I was out there as soon as I heard about it,” Wet’suwet’en Hereditary Chief Gisday’way said about the remote RCMP detachment, which sits on his territory. RCMP said the spill, which is blamed on a faulty fuel line, was discovered May 19. The Office of the Wet’suwet’en, which represents the hereditary chiefs, wasn’t notified until several days later.

Chief Gisday’way, whose English name is Fred Tom, says the spill site slopes toward the Morice River, about 100 metres away.

“It slants that way. The water runs that way to the river. There’s a tree-planting camp not too far from them downriver and they didn’t even tell them about it,” he said.

It was staff from the Office of the Wet’suwet’en’s natural resources department investigating the spill who stopped in at the camp, which is less than a kilometre from the detachment, and notified the tree planters, said Hereditary Chief Na’Moks. He added that while RCMP didn’t have equipment for cleaning up the fuel, the reforestation company did.

“The tree-planting camp had all the environmental safety equipment and spill kits, yet the RCMP didn’t have any of it,” said Na’Moks, whose English name is John Ridsdale.

In a statement, RCMP said the fuel line failure took place shortly before it was discovered during a routine check.

“The facility owner immediately notified the appropriate government agencies to test for environmental contamination and remove affected soils,” RCMP media relations officer Cpl. Madonna Saunderson said in an email Wednesday. RCMP contacted Chief Gisday’way and the Office of the Wet’suwet’en three days later, she said. “Since this date, we have been liaising with the responsible company and continuing to provide updates to the Office of the Wet’suwet’en, as well as conducting site visits.”

However, Chief Gisday’way speculated that the loose fitting that caused the leak may have been in place much longer. In a video posted to Facebook, an RCMP officer is shown telling a Gidimt’en clan member that he has “no idea” how long the fuel tank had been leaking.

Office of the Wet’suwet’en environmental assessment co-ordinator Mike Ridsdale wasn’t available for comment Wednesday as he was visiting the site of a second, more recent spill at the Coastal GasLink pipeline’s 9A Lodge, a work camp about 100 kilometres down the Morice forestry road that’s expected to host 450 workers by next summer.

Chief Na’Moks said the pipeline company notified the Office of the Wet’suwet’en about five days after the spill happened. Like the first incident, the natural resources department was told about 500 litres of diesel was deposited onto the ground.

“They’re supposed to notify us right off the bat, but we’re that far behind on their notification,” he said. “With CGL, they constantly tell us it’s world-class cleanup and environmental standards. We know B.C. is just going to give them a slap on the wrist. It’s just disgusting.”

Coastal GasLink did not respond to emails from The Tyee by press time Wednesday.

The RCMP’s Community-Industry Safety Office was established 30 kilometres south of Houston, B.C. in January 2019, three days after police acted on an interim injunction by forcibly removing barricades 44 kilometres down the Morice forestry road. The roadblocks were put in place by the Gidimt’en clan and its supporters who oppose Coastal GasLink, a 670-kilometre, $6.6 billion pipeline that will ship fracked gas from the province’s northeast to a terminal near Kitimat.

Nearly a year and a half later, the detachment remains in place, despite calls from the hereditary chiefs for its removal.

RCMP has been criticized for the amount of resources it has directed to the detachment. While the force has declined to share staffing numbers, Chief Na’Moks has said that 16 full-time officers are stationed at the detachment.

Officers continued to conduct regular patrols of the Morice forestry road until Wet’suwet’en hereditary chiefs closed the road in January in response to a BC Supreme Court decision granting Coastal GasLink permanent access to its pipeline route. The conflict continued until late February — including five tense days when RCMP arrested 28 people and removed a series of barricades along the road — until hereditary chiefs agreed to sit down with federal and provincial representatives.

A condition of the meeting was that RCMP remove the remote detachment from Wet’suwet’en territory. While the force began basing its patrols out of nearby Houston, the ATCO trailers that make up the C-ISO detachment have remained and are part of the officers’ regular patrols. The leaky fuel line was connected to a generator at the site, according to the Facebook video.

In the video, an officer says police are maintaining a presence at the detachment while the site is cleaned up, “Just because it is a bit of a mess.”

“A mess you guys created, after Gisday’way asked you guys to leave his territory,” responds a Gidimt’en member behind the camera. “The chiefs were assured this C-ISO office was going to be dismantled and now we hear of 500 litres of diesel being spilled. So imagine his disappointment and our outrage.”

Another officer is shown asking the Gidimt’en clan member to leave the area.

A hole has been dug to remediate the site and soil samples sent to Calgary will determine whether all the contaminated earth has been removed, Gisday’way said.

“When it’s something like that, way out there in the middle of nowhere, you should check on that every day. Anybody with half a brain knows that,” he said. The hereditary chief said he has spent time working in industrial camps in the past.

“If we saw a leak, we’d address the company that we’re working for. If there’s a leak in the machinery, we fix it or we tell the boss about it, say that’s got to be fixed now. How they let that go for a 500-litre spill, that’s beyond me. Somebody’s not doing their job.”

Amanda Follett Hosgood  lives and writes amidst the stunning mountains and rivers of Wet’suwet’en territory. Find her on Twitter @amandajfollett.

Canada Has Race-Based Police Violence Too. We Don’t Know How Much