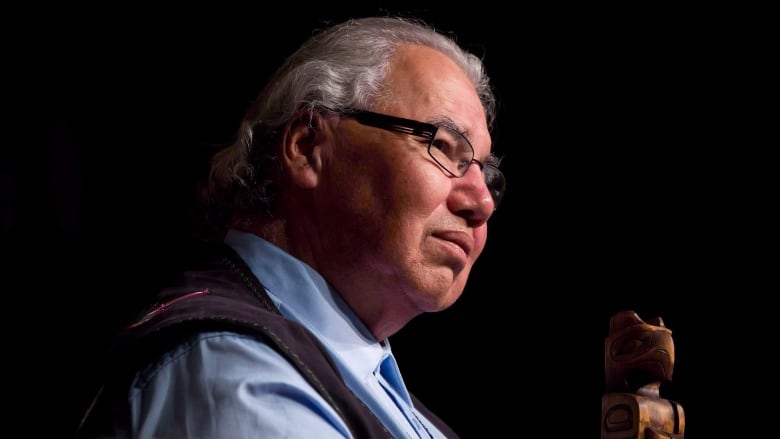 Sen. Murray Sinclair says the disappearance of Ottawa’s co-operation on records ‘is actually tragic because it means the information around the full and complete story of the residential school experiences… is not going to be told.’  (The Canadian Press)

Ongoing litigation over records from the residential schools compensation process undermines the federal government’s reconciliation agenda and commitments made to the Truth and Reconciliation Commission, according to Sen. Murray Sinclair, who chaired the commission.

The federal government won an initial Ontario Superior Court victory in January blocking the creation of statistical reports on residential school abuse claims and the direct transfer of other records to the National Centre for Truth and Reconciliation, which holds the records gathered by the Truth and Reconciliation Commission (TRC).

“It’s not indicative of any commitment to reconciliation when they start to shut down access to documents such as this,” said Sinclair, who was chair of the TRC.

“The litigators still seem to think that this is no longer relevant to anything that Canada is obligated to or committed to do and I think they are wrong.”

Sinclair said he would be bringing up the federal government’s position to control the fate of the records with Justice Minister David Lametti and Crown-Indigenous Relations Minister Carolyn Bennett.

The TRC examined the over century-long history of residential schools which saw 150,000 First Nations, Inuit and Métis children forced to attend the institutions and resulted in the deaths — from disease, malnourishment and abuse — of thousands of students.

Its findings and recommendations set the road map the federal Liberal government has said it intends to follow on its reconciliation agenda.

Lametti’s office referred questions on the issue to Bennett’s office, which it said was the client on the case and directed the position of federal lawyers.

The TRC was created by the Indian Residential Schools Settlement Agreement which also established the Independent Assessment Process (IAP) to determine compensation levels for survivors who experienced abuse at the institutions.

The claims process is scheduled to end in March 2021 and the body that oversaw the IAP, the Independent Residential School Adjudication Secretariat, was seeking to transfer its administrative records — excluding individuals’ compensation files — to the National Centre for Truth and Reconciliation.

A 2017 Supreme Court decision forbade the archiving of information on individuals’ compensation claims. Personal claim information is set to be destroyed in 2027 unless a survivor indicates they would like their file archived.

The federal government opposed the direct transfer of the secretariat’s records to the National Centre for Truth and Reconciliation, arguing the records were its property and they should be transferred to the Crown-Indigenous Relations department which would then hand them over to Library and Archives Canada.

Federal lawyers also successfully argued that the creation of detailed statistical reports — called static reports — could violate the privacy of individual survivors who filed for compensation despite safeguards outlined by the secretariat.

The Crown-Indigenous Relations department has previously stated that it “is concerned the release of static documents could result in a breach” of the 2017 Supreme Court decision.

The secretariat’s database has nearly two decades of information from over 38,000 claims filed since the compensation process began.

The secretariat proposed to extract and organize information from its database into static reports that break down compensation claim statistics. Some proposed categories included which residential schools were linked to the most abuse claims.

“It would appear Canada has switched horses. Initially, while the settlement agreement was in place and we were going through the TRC process … we were meeting constant assurances that the government would be co-operative in making full disclosure of documents as needed,” said Sinclair.

“So that assurance of co-operation appears to have disappeared and that disappearance is actually tragic because it means the information around the full and complete story of the residential school experiences… is not going to be told.”

Sinclair said the voices of survivors have been excluded from the ongoing legal fight.

“I think they have the obligation to go to the survivors or survivor representatives to say, ‘We would like to be able to disclose this information, do you have any concerns?’ said Sinclair.

“No one is asking the survivors or the families and that is a concern I have.”

Cindy Hanson, a professor and director in the University of Regina’s faculty of education, is in year three of a five-year research project examining the IAP through input from survivors, judges, adjudicators, lawyers and health support workers.

Hanson said records such as the static reports are key to understanding the history of residential schools and the workings of a pivotal mechanism of the settlement agreement, which was historic on an international level.

“We’ve created a mountain of data on how abuse happened, who perpetrated violence in institutions,” said Hanson.

The National Centre for Truth and Reconciliation (NCTR) is appealing the January ruling.

Jorge Barrera is a Caracas-born, award-winning journalist who has worked across the country and internationally. He works for CBC’s Indigenous unit based out of Ottawa. Follow him on Twitter @JorgeBarrera or email him jorge.barrera@cbc.ca.