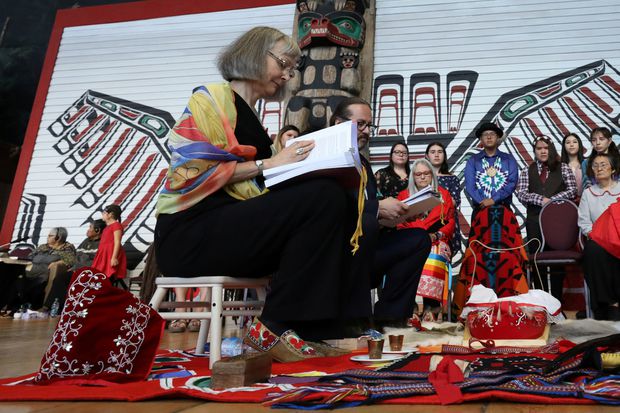 Lead commissioner Marion Buller prepares to handover the final report during the closing ceremony of the National Inquiry into Missing and Murdered Indigenous Women and Girls in Gatineau, Quebec, June 3, 2019.

Prime Minister Justin Trudeau promised action when the National Inquiry into Missing and Murdered Indigenous Women and Girls released its final report in an emotional ceremony one year ago. There was plenty to act on.

The 1,200 pages of the report included 231 calls for justice and instructed all levels of government to provide a better, safer world for Indigenous women and girls and 2SLGBTQQIA (two-spirit, lesbian, gay, bisexual, transgender, queer, questioning, intersex and asexual) people.

A national action plan developed with Indigenous organizations and provincial and territorial governments aimed at addressing the causes of the violence was supposed to be released this month.

Crown-Indigenous Relations Minister Carolyn Bennett said last week that the plan will be delayed because of the global COVID-19 pandemic.

Marion Buller, lead commissioner for the MMIWG inquiry, said she would like the government to put the same amount of energy into dealing with violence against women and girls as it is expending in response to COVID-19.

“We’ve seen how quickly governments, and not just federal, but provincial governments, can mobilize when there’s political will,” she said.

Ms. Buller, who is not part of the team developing the national action plan, wants it to embrace the inquiry’s final report.

“It should be a comprehensive national action plan that implements our calls for justice, period,” she said. “Anything less than that, I think … is cherry-picking, vote-buying, appeasement and lip-service.”

At the ceremony on June 3, 2019, Ms. Buller, a member of the Mistawasis First Nation in Saskatchewan who is a retired judge of British Columbia’s Provincial Court, asserted that the calls for justice are not recommendations, but legal imperatives.

In an e-mailed statement, the department of Crown-Indigenous Relations and Northern Affairs Canada wrote that it is committed to the action plan. The statement said the plan is being developed not only with provincial and territorial governments and Indigenous organizations but with the voices of families and survivors.

It is unknown exactly how many cases of missing and murdered Indigenous women and girls Canada has.

The inquiry was unable to provide a number, but some advocates say it is in the thousands. In 2014, the RCMP released the results of a special project that concluded 1,181 Indigenous women in Canada were missing or murdered between 1980 and 2012. The RCMP has no plans to produce another report.

Although many family members and experts waited decades for a national inquiry, not everyone supported it or participated in the “truth gathering” process.

Joyce Carpenter is among them. Her 14-year-old daughter, Patricia Carpenter, also a mother, was found dead in September, 1992, on a Toronto construction site. Her death was deemed suspicious at a coroner’s inquest, but the jury concluded there was not enough evidence to classify it as a homicide.

“There’s been so many [missing and murdered women and girls] since,” Ms. Carpenter said. “I’ve lost all faith in the justice system.”

Still, she would like words turned into action, and for Indigenous people to be free of injustices and racism.

Cindy Blackstock, an advocate for First Nations children, said the government has chosen not to act. Ms. Blackstock has spent more than 25 years fighting for equitable care for children on reserves, who receive as much as 38 per cent less funding than those off-reserve.

She pointed to Ottawa’s lack of action on a 2016 Canadian Human Rights Tribunal ruling that ordered the federal government to cease discriminatory practices and reform the First Nations child welfare system.

When nothing was done, the tribunal issued a ruling in September, 2019, ordering the government to pay $40,000 to children who were taken into care unnecessarily. Indigenous Services has appealed the order.

“The money’s been flowing with COVID, and then I contrast that with how Canada has fought so hard against the equality of First Nations children and compensating the families and children they’re discriminating against,” said Ms. Blackstock, executive director of the First Nations Child and Family Caring Society of Canada.

Ms. Blackstock notes there have been many inquiries and inquests: the MMIWG inquiry, the Royal Commission on Aboriginal Peoples, the Aboriginal Justice Inquiry, the Missing Women Commission of Inquiry, and the Truth and Reconciliation Commission. There have also been calls for national action plans for suicide prevention and housing for Indigenous people.

“Until the government is made to reform itself by having an independent evaluation as to why it consistently chooses to resist and to fight against the basic human rights for Indigenous, Métis and Inuit peoples, nothing is going to change,” she said.

NDP MP Leah Gazan says Indigenous women are facing even greater risks of violence because of isolation measures aimed at slowing the spread of COVID-19.