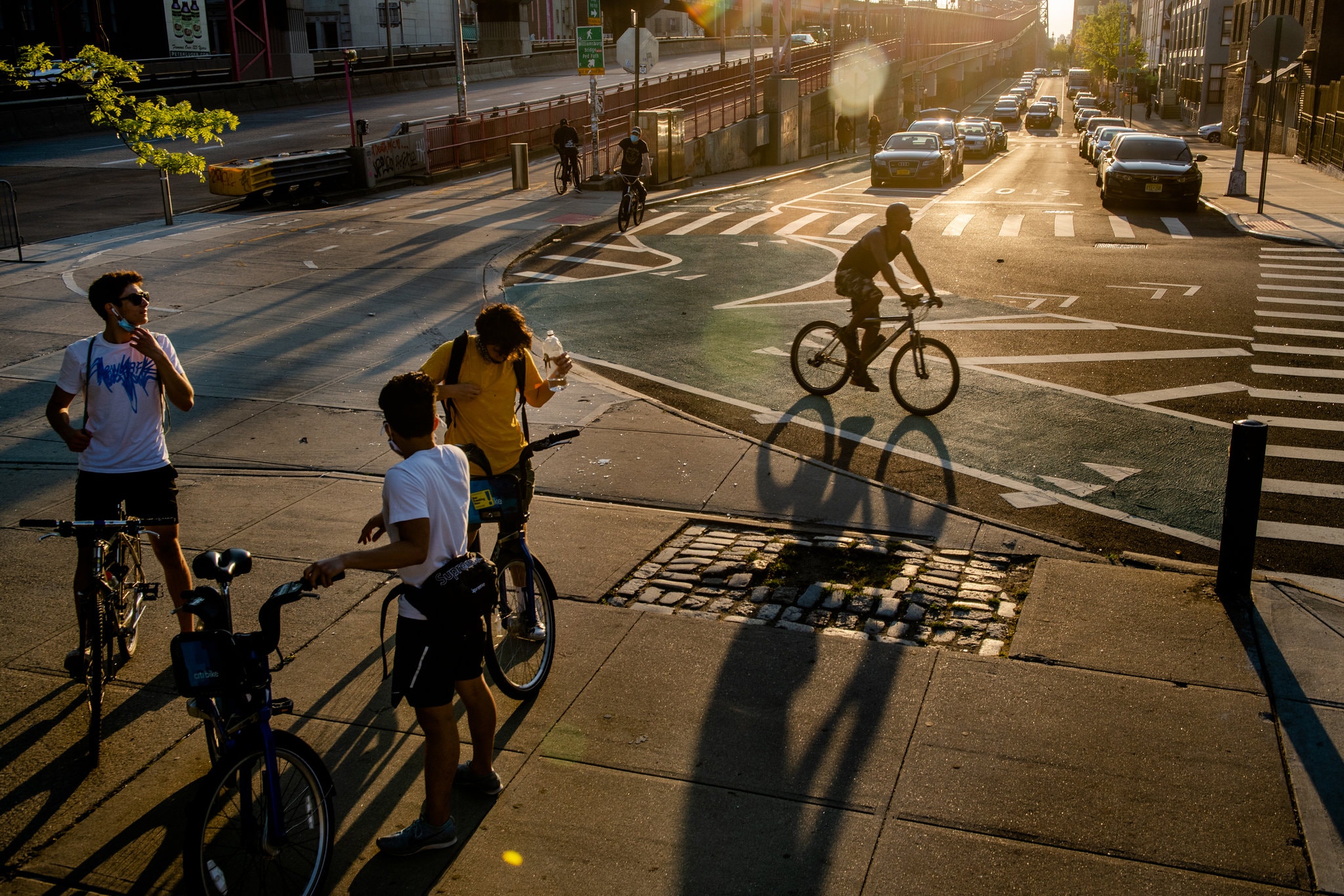 Some bicycle shops in Brooklyn are selling twice as many bikes as usual and drawing blocklong lines of customers. A chain of shops in Phoenix is selling three times the number of bikes it typically does. A retailer in Washington, D.C., sold all its entry-level bikes by the end of April and has fielded more preorders than ever in its 50-year history.

As the coronavirus pandemic shrinks life in major American cities — limiting pastimes and discouraging use of buses and subways — hundreds of thousands of Americans are flocking to one of the most basic forms of mobility: the bicycle.

By the end of April, many stores and distributors had sold out of low-end consumer bikes. Now, the United States is facing a severe bicycle shortage as global supply chains, disrupted by the coronavirus outbreak, scramble to meet the surge in demand.

“I have never seen anything remotely approaching this,” said Ryan Zagata, president of Brooklyn Bicycle Company, where sales have soared by more than 600 percent this year compared with the same period in 2019. “If you went into a store three weeks ago you could find a bike under $1,000. Right now shelves are bare.” 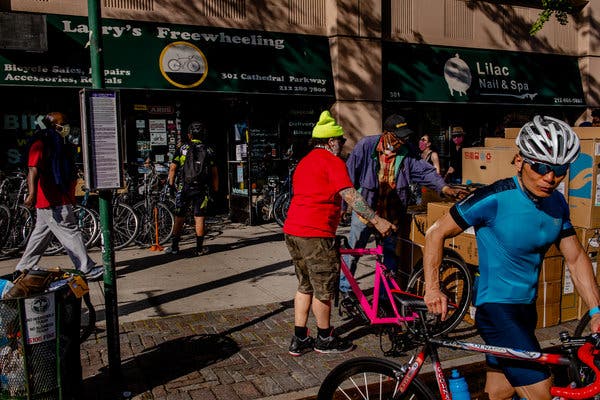 The spike in sales comes on the heels of stay-at-home orders that have temporarily curtailed daily life, but that may permanently transform the role of bicycles into something more essential, including a safer alternative to public transit as the nation slowly begins to reopen.

Some American cities are already planning for a lasting shift after the pandemic — a significant departure in a society that has favored cars over bikes for decades, even as European cities embraced cycling as a transportation mode as integral as New York City’s subway.

“We are absolutely confident we are going to see more bike commuting in the months ahead,” said Polly Trottenberg, New York City’s transportation commissioner.

In April, New York announced that it would temporarily open 100 miles of roads to pedestrians and cyclists — a move that may lead to permanent closures, officials say. Oakland plans to shut down about 10 percent of its streets to cars during the pandemic, while Seattle said it would permanently close 20 miles of roads.

“We are already seeing people who hadn’t biked before are trying it for the first time,’’ Ms. Trottenberg said. “We are going to see a lot more of that as the city starts to come back to life.”

The change would be a notable departure from the role bikes have tended to play in American life. For generations, riding a bike has been a symbol of relaxed summer days and a nostalgic rite-of-passage for children growing up in suburban sprawl. 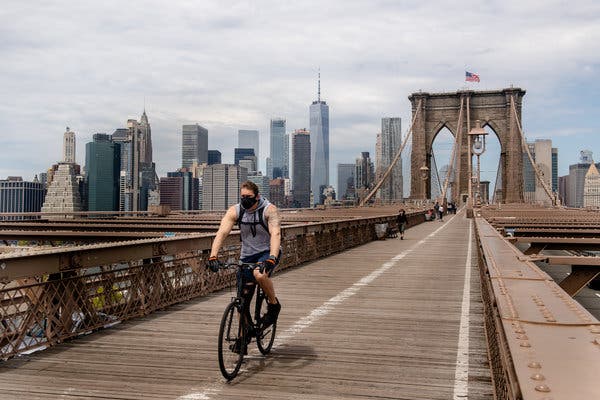 More recently, road biking became a popular hobby in warm-weather cities on the West Coast, while on the other side of the country, hipsters adopted bikes as part of their against-the-grain brand of cool.

Still, relatively few Americans have used bikes as a serious alternative to cars and public transit. Today fewer than 1 percent of New Yorkers commute by bike. In Portland, which has the highest percentage of cycling commuters of any American city, only 6.3 percent of commuters ride bikes. By comparison, in Copenhagen nearly half of all trips to work and school take place on bicycles.

“The U.S. has been built around cars,” said Sarah M. Kaufman, associate director of New York University’s Rudin Center for Transportation Policy and Management. “The European model has tended to be more forward looking in terms of sustainability and safety, which leads them to favor bikes.”

But since the pandemic upended daily life in the United States, cycling has taken on a crucial, sanity-saving role: bikes are a way to exercise while gyms stay closed and an inexpensive means of getting around cities where more than 90 percent of riders have abandoned public transportation.

Going for a bike ride has replaced grabbing a drink on first dates and has been used to coax children outside while parents are on conference calls at home.

Outside Bicycle Habitat in Brooklyn, the line of customers waiting to buy new bikes or have old ones repaired stretches down the block nearly every day. While bike sales usually increase in warmer months, the recent flood of customers is unheard of, the owner, Charlie McCorkell, said.

On Friday morning, Aaron Richter, a 37-year-old photographer, waited to buy accessories for a bike he had just purchased online. 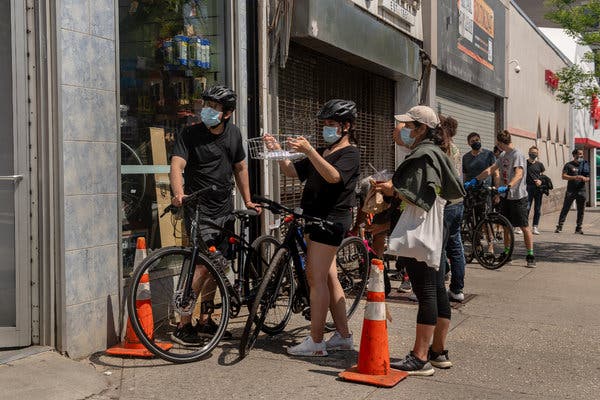 “I haven’t been on a bike since college,” he said. “I want the ability to get out of the whatever-block radius I’m stuck in.”

Jadciry Altamirano, 21, had taken her place at the front of the line before the store opened.

Ms. Altamirano, who was buying a bike for her mother, wanted to make sure she had the first pick of increasingly slim options: the week before, her brother visited five bike stores in a single day searching for a bike for himself in his price range, before settling for one that cost $900.

“We were left with higher-cost options,” Ms. Altamirano said of the $750 bike she ended up buying for her mother on Friday.

Ms. Altamirano, who works at a gym, and her mother, who works as a housekeeper, both plan to commute by bike rather than take the subway when they return to work.

At first, most customers were buying bikes under $1,000, industry leaders and shop owners say. By the end of April, many stores had sold out of those bikes.

“We’ve never seen a surge like this across a range of products,” said Robert Margevicius, executive vice president of Specialized, one of the largest bicycle companies in the United States. “Everybody is scrambling to get more.” 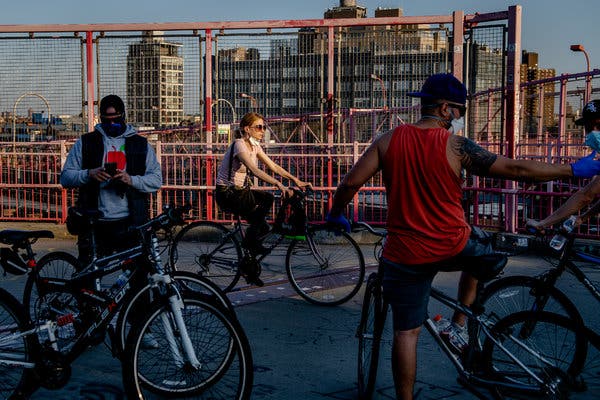 But the demand could not have come at a worse time.

Most American importers have kept limited inventory since 2018, when President Trump ordered new tariffs on goods produced in China, where some parts used on nearly all bikes sold in the United States are made.

As a result, in 2019 the number of bikes imported into the United States dropped by around 25 percent compared with 2018, according to Mr. Margevicius. In the first quarter of this year, imports were down by around 30 percent compared to the same period in 2019.

The pandemic also forced factories in Asia to shut down in January and February, stalling the production of new bikes. Many were not able to bring production back to capacity until April, even as requests from importers swelled.

Taioku Manufacturing Co., a bicycle manufacturer in China and Taiwan, has received double the orders from importers for the first six months of this year compared with the same period last year, according to Kevin Tsu, a general manager. Still, the manufacturer can produce only 20,000 bikes a month — the same maximum production as usual.

“In China, there is still a serious shortage of labor and component parts,” he said, adding that as a result, bicycle manufacturers are two or three months behind in deliveries. 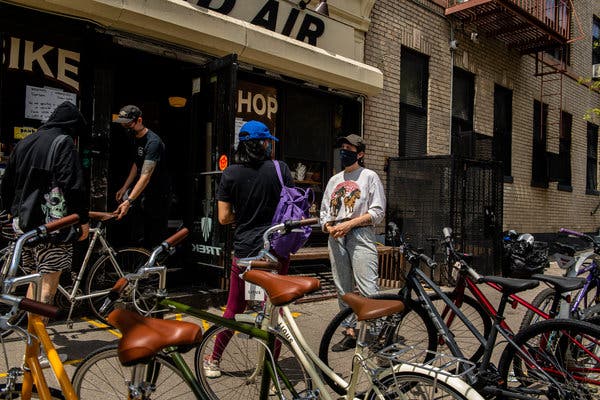 Most American importers expect the first shipments of new bicycles to arrive by mid-June, though many retailers have already sold most of the inventory they expect to receive then through early orders from customers.

Some aspiring cyclists may have to wait until July or August for the next shipments of low-end consumer bikes to arrive, retailers say.

“There is no way to keep inventory for sub-$1,000 bikes,” said Lee Katz, co-owner of Turin Bikes in Chicago. “We’ve got a few right now, but it’s a matter of scrambling for them. We really don’t expect to see much in the way of inventory like that until July.”

At Big Wheel Bikes in Washington, D.C., the list of customers making preorders is the longest it has ever been in the company’s history. At Global Bikes in Phoenix, calls from customers looking for bikes have flooded in so incessantly that the owner, Brandee Lepak, said she can often still hear ringing when she gets home for the night.

But as some customers wait weeks for new shipments to arrive or scour secondhand sales online, many people who have managed to get bikes have found respite from the public health emergency on two wheels.

Jeremy Payne, who lives in Phoenix, purchased four bikes in the last month: one for him, one for his wife and one for each of his two children. He starts most of his days with a long bike ride and his wife has taken to riding to the grocery store rather than driving their car.

Even his 75-year-old mother, for whom he bought an electric bike in November, has become an avid cyclist in her neighborhood in Santa Barbara, Calif.

“She hadn’t been riding that much, but because of the pandemic she’s been cooped up in her house and wanted to get out,” he said. “Now she bikes around the same loop and her neighbors wave at her when she passes them. For her in her community it’s like the Tour de France.”

How to Have a Safe Family Bike Ride 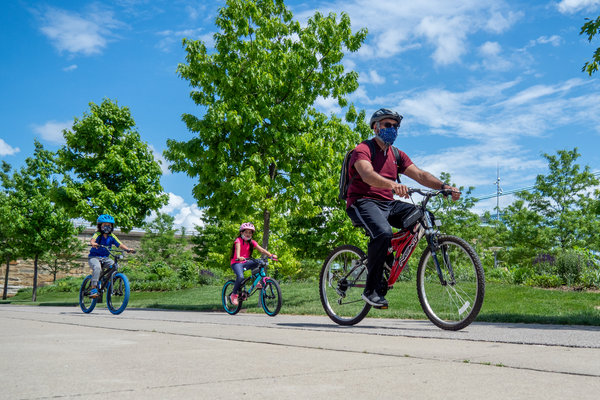 Nate Schweber contributed reporting. Christina Goldbaum is a transit reporter covering subways, buses, ferries, commuter rails, bicycles and all the other ways of getting around New York. Before joining The Times in 2018, she was a freelance foreign correspondent in East Africa. @cegoldbaum

How to Have a Safe Family Bike Ride