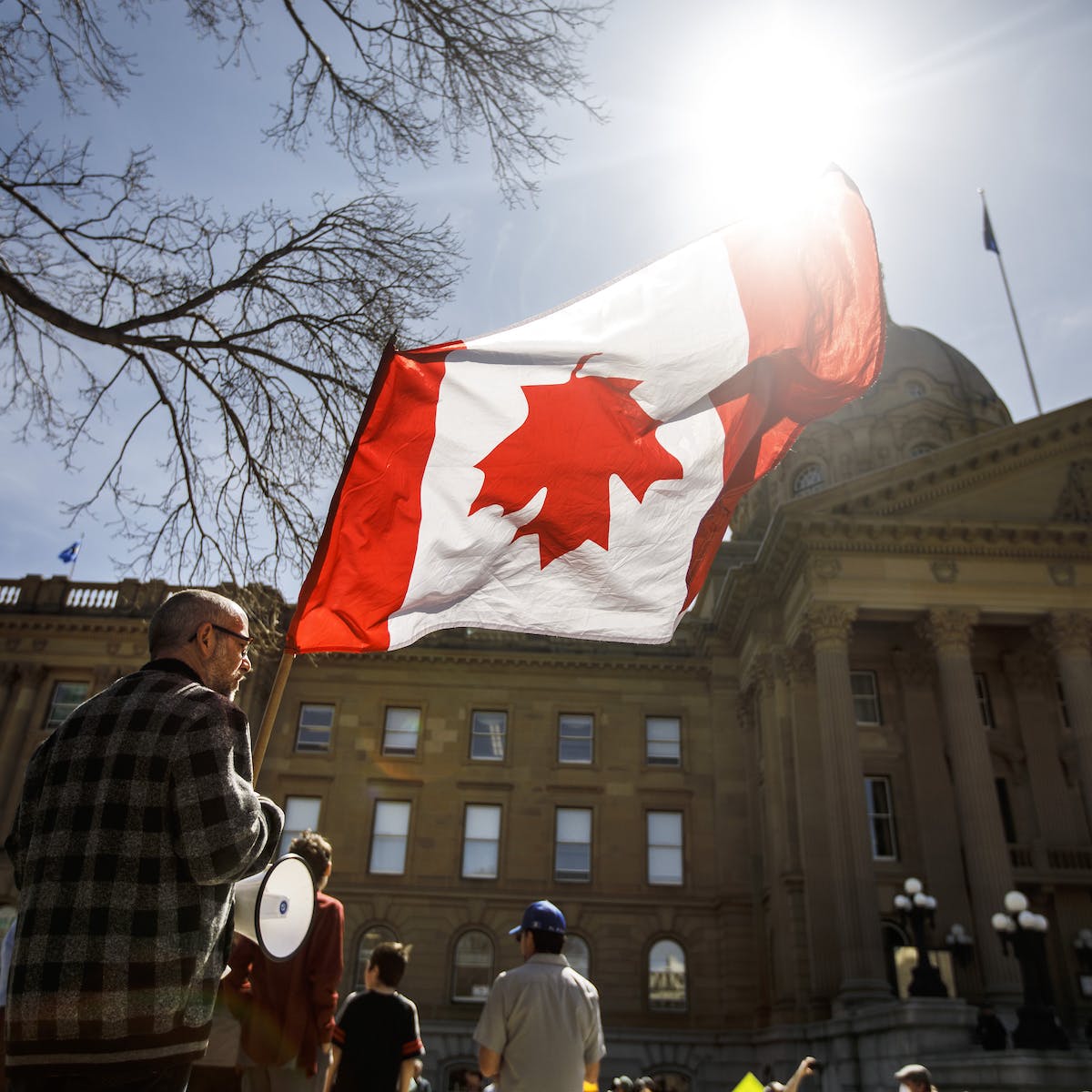 A group gathers to protest against social isolation rules of the COVID-19 pandemic in Edmonton, Alta., on April 29, 2020. THE CANADIAN PRESS/Jason Fra

As Canadian provinces begin to ease COVID-19 lockdowns, is it an exercise of one’s constitutional rights to protest the restrictions that continue to exist? Is it right for jurisdictions to pass legislation that will restrict freedom of assembly long after Canada has flattened the curve and the pandemic has passed?

The Canadian Charter of Rights and Freedoms might help provide some answers.

Canadians are apparently suffering from “isolation fatigue” and there have been public complaints against people flouting municipal social distancing bylaws. Toronto Mayor John Tory had to apologize for failing to wear a mask and adhere to social distancing regulations at Trinity Bellwoods Park in late May, while Premier Doug Ford cracked down on the crowds that gathered there by ensuring bylaw officers were out in force the next day.

Since then, Ontario delayed allowing so-called bubble families — gatherings of more than five people — when the province’s COVID-19 cases crept back up amid concerns about the impact of large group gatherings on Mother’s Day in mid-May.

Meanwhile in Alberta, the province’s energy minister recently took heat from climate change activists for her remark that “it’s a great time to build a pipeline because public health restrictions (will) limit protests against them,” while Premier Jason Kenney’s controversial bill that allows the province to declare anything it wants as “critical infrastructure” passed its third reading in late May.

The federal government, the provinces and municipalities across Canada have exercised a variety of different legal powers in response to COVID-19. The lockdowns have raised significant constitutional questions specific to freedom of assembly.

Canada has so far not invoked the federal Emergencies Act and all national COVID-19 legislation has been passed in compliance with December 2019 changes to the Justice Act. Charter statements have therefore been tabled in conjunction with every COVID-19 bill that has subsequently become law.

Isolation orders nonetheless infringe upon a number of rights outlined in the Canadian Charter. The Canadian Civil Liberties Association has criticized Canadian cities for overzealously policing social distancing by failing to inform or warn individuals before imposing heavy fines, and has recently launched a Charter challenge against Newfoundland for denying a woman entry into the province to attend her mother’s funeral. All Charter rights violations, however, can be justified under the limitations clause in Section 1.

Freedom of assembly in Canada

If harm can be proven, limits on freedom can be justified. Where harm is absent, freedom must prevail. The concept of harm, however, remains subjective.

Constitutional law expert Sujit Choudhry has argued that the protection of life may be a justifiable limit on freedom of assembly during the pandemic, when the state either knows the level of risk or ought to know it. The Charter could thereby arguably allow for lockdowns — and potentially require them — in the interest of protecting care workers and vulnerable populations.

In contrast, a labour rights ruling issued by the Supreme Court of Canada in 2015 supports the right to freedom of assembly more broadly.

In Mounted Police Association of Ontario vs. Canada (AG), the court opened the door to extending constitutional protections to protests under Section 2 of the Charter. The ruling would guarantee rights to collective action that Alberta’s Critical Infrastructure Defence Act, or Bill 1, seeks to undermine.

In February 2020, Kenney introduced the legislation as a response to “those who would seek to hold us all in jeopardy to their radical demands.”

He framed “the loss of tens of thousands of jobs” in Alberta as a product of those who would “make a mockery of the principle of the rule of law” by blocking critical public infrastructure.

His supporters justify the bill as a means to curb the climate activism that they claim is to blame for the Teck Resources decision to pull out of a $20-billion oilsands project and as a response to two protest movements, both of which were happening outside Alberta at the time the bill was tabled.

The first was playing out mostly in British Columbia. The ongoing Wet’suwet’en action began when Indigenous land defenders and their allies opposed the construction of a pipeline through Wet’suwet’en territory, drawing attention to the absence of meaningful consultation and a lack of recognition of Wet’suwet’en law.

The second took place in Saskatchewan and Manitoba. The labour dispute involving the Red River Co-op Refinery resulted in a lockout of 700 workers. In turn, they barred entry into the refinery in Regina and set up picket lines at Shell and Esso terminals in Winnipeg.

According to Alberta’s proposed legislation, those who violate the act can be arrested without a warrant, fined between $1,000 and $10,000 for a first offence and serve up to six months in jail. The fine would increase for second offences, amounting to $25,000. Finally, “organizations who direct, authorize or otherwise participate in these activities” could be fined up to $200,000.

The bill also contains a clause that allows the government to designate anything from schools to hospitals and the provincial legislature itself as critical infrastructure. The COVID-19 pandemic seems to have overshadowed the fact that the bill passed its third reading without adequate public consultation or consultation with First Nations.

So is it an exercise of one’s constitutional rights to protest COVID-19 restrictions as some people have been doing across the country?

The limitations clause of Section 1 of the Charter would support maintaining limits on forms of freedom of assembly that flout federal, provincial and municipal COVID-19 regulations.

But those justifiable limits are tested by provincial legislation like Alberta’s Bill 1. That raises questions about whether Section 2 of the Charter can be extended to protect collective action and warrant the creation of exceptions to large group gatherings that follow COVID-19 restrictions, as was the case during global May Day celebrations that saw large groups gather but adhere to social distancing rules.

If there is a second wave of COVID-19, Charter rights to freedom of assembly are well worth considering before presuming that all pandemic restrictions are unconstitutional or passing more controversial legislation like Alberta’s Bill 1.