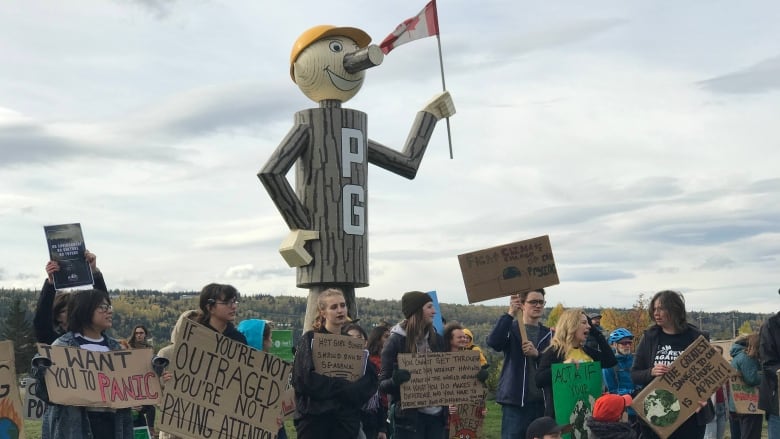 A climate demonstration in Prince George in 2019. A new report from city staff shows how climate change has already affected the region, from historic wildfire events to long winter cold snaps, and lays out emission targets to try and mitigate the risks. (Andrew Kurjata/CBC)

By the year 2050, residents of Prince George, B.C., can expect to have six more days a year where temperatures soar above 30 C, according to a city report that outlines new climate targets for the municipality.

The 2020 Climate Change Mitigation Plan was approved by city council March 26 and replaces a 2007 energy and greenhouse gas management plan that had only set targets up until the year 2012.

Targets for the old plan were not met and there had been no plan in place in the municipality for more than a decade.

‘We really don’t want to push everything off into the future. We want to make that incremental change,” said Andrea Byrne, the city’s environmental coordinator and author of the report.

The report shows how climate change has already affected the region, from historic wildfire events to long winter cold snaps, as well as hotter summer days.

Both the previous goals, and the new ones, apply to both corporate emissions — which includes greenhouse gases created by city projects, such as road work or building construction — and community emissions from residents’ activities, such as driving.

Corporate greenhouse gases had actually increased 7.5 per cent by 2012, and were up 9.5 per cent by 2017. According to the 2020 report, this was due to burning fossil fuels to heat buildings and power vehicles.

During an interview on CBC’s Daybreak North, Byrne said transportation is responsible for the majority of emissions and will be one of the key areas the plan focuses on, which will mean trying to encourage more Prince Georgians to walk, bike and use public transport.

Byrne said the city is hoping to hold public conversations about the plan in the fall.

To hear the complete interview with Andrea Byrne on Daybreak North, tap here