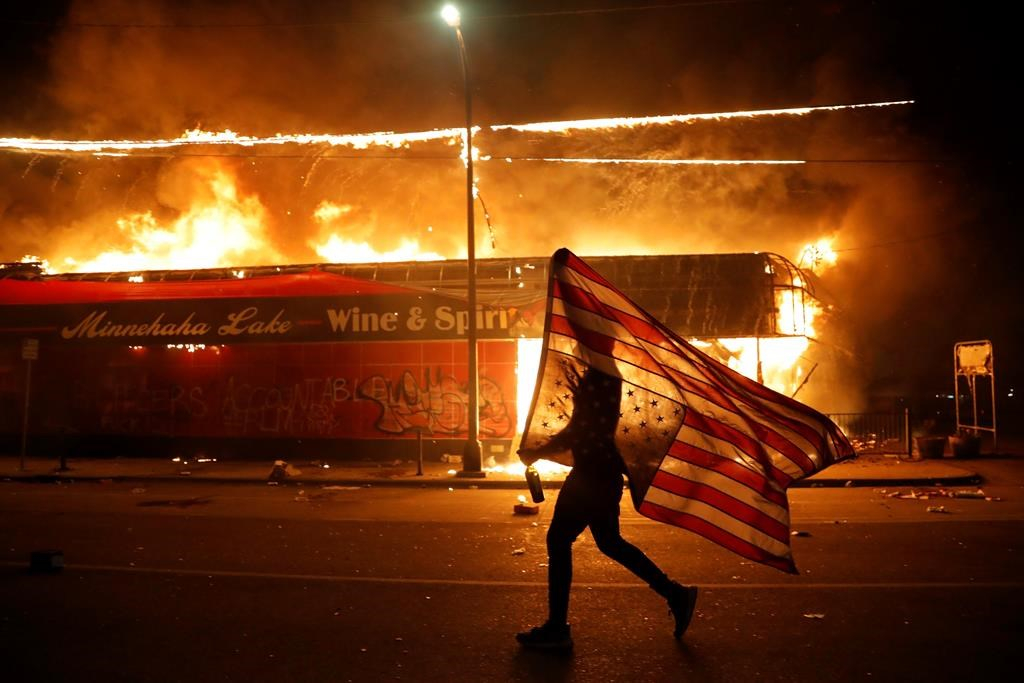 A protester carries a U.S. flag upside, a sign of distress, next to a burning building on Thursday, May 28, 2020, in Minneapolis. File photo by The Associated Press/Julio Cortez

America’s anger, frustration and discord boiled over in Minnesota’s Twin Cities and spread across the country Friday at a remarkable moment in the history of the United States, sparked by the collision of racial injustice, freedom of expression and the worst public health crisis of the last 100 years.

After more than two months of pandemic-induced, self-imposed exile, protesters in Minneapolis — some wearing face masks not to conceal their identities, but to ward off COVID-19 — laid waste to city streets after the police killing Monday of George Floyd, an unarmed black man.

His torturous eight final minutes of life were spent begging for mercy, a white police officer kneeling on his neck.

The rage appeared contagious. As evening gave way to night on the East Coast and an 8 p.m. curfew approached in Minneapolis, multitudes of protesters massed in various cities in a show of solidarity. In Atlanta, violence erupted; protesters set fire to a police cruiser, pelted officers with bottles and smashed patrol car windows with pieces of barricade.

In Washington, D.C., people gathered outside the White House to register their anger, while in New York City, demonstrators rained plastic water bottles down on police, who responded with blasts of pepper spray.

But the flashpoint was Minneapolis, where a police station was among the structures that went up in flames after staff abandoned the premises of Precinct 3, which was subsequently overrun by protesters. Early Friday, CNN reporter Omar Jimenez, who is black, was arrested on live television and led away in handcuffs, as were members of his crew.

All of them were released a short time later following an abject apology from Minnesota Gov. Tim Walz, who characterized the arrest as a mistake.

By early afternoon, Derek Chauvin, the officer who is seen on cellphone video pressing Floyd’s neck to the ground, was himself arrested and facing charges of third-degree murder and manslaughter, prosecutors said. Activists vowed to keep up their fight until all four officers involved were in police custody.

All of it prompted Prime Minister Justin Trudeau, unbidden, to do something he rarely does: comment publicly on another country’s domestic affairs.

“Anti-black racism, racism, is real; it’s in the United States, but it’s also in Canada,” Trudeau said Friday as he wrapped up his daily briefing outside his home at Rideau Cottage in Ottawa.

More than once he used the term “anti-black racism,” a specific phrase that black communities have long advocated for in order to distinguish the express injustices black people face in Canada and around the world from other forms of discrimination.

Trudeau acknowledges ‘anti-black racism’ in U.S., with ‘work to do in Canada’

“We need as a society to stand together, to stand up against discrimination, to be there for each other in respect, but also understand that we have work to do as well in Canada in our systems that we need to work forward on,” Trudeau said.

“I call on all Canadians — whether it’s anti-black racism or anti-Asian racism or racism discrimination of any type, to stand together in solidarity, to be there for each other and know just how deeply people are being affected by what we see on the news these past few days.”

Racial unrest, often sparked by deadly police action against black Americans, is nothing new in the U.S. But in a polarized country near the end of Donald Trump’s fractious and controversial first term, its economy now plumbing Great Depression depths in the midst of a pandemic that has claimed more than 100,000 lives, the conflict feels like a new low-water mark.

And in Louisville, Ky., police confirmed at least seven people had been shot Thursday night as protesters demanded justice for Breonna Taylor, a black woman who was fatally shot by police in her home in March.

“This is a moment where we don’t feel like we’re sort of northern Americans, that we’re kind of like the Americans, because this comes from a place that does not compute for us, and that we don’t share,” said Chris Sands, a Canada-U.S. scholar and head of the Canada Institute at the Washington-based Wilson Center.

“Moments like this are always profound — and profound for the way in which they set us apart.”

Trump drove that point home overnight when he promised a hard line against the “thugs” who were wreaking havoc — “when the looting starts, the shooting starts,” he tweeted.

Twitter responded with the unprecedented step of censoring the president of the United States, blocking — but not deleting — a tweet the social media platform said was “glorifying violence.”

Later Friday, what was billed as a news conference in the Rose Garden resulted only in the president delivering a statement on China, Hong Kong and the World Health Organization, refusing to answer questions or acknowledge the unfolding crisis in Minnesota.

He later explained that the tweet wasn’t meant as a threat, but rather that people get killed when looting takes place. And he said he spoke to Floyd’s family and offered his sorrow for their loss.

“That was just a horrible thing to witness and to watch … It certainly looked like there was no excuse for it,” Trump said. “They were grieving.”

A number of the protesters in Minneapolis were taking action “for the right reason” and “out of sorrow,” he added, while those who engaged in wanton violence and destruction of property “did a great disservice” to the country.

Walz called his state’s response to the violence an “abject failure” and promised to ensure destruction in the streets does not distract from the ultimate goal of those protesting peacefully: swift justice for the officers involved in Floyd’s death.

“Minneapolis and St. Paul are on fire. The fire is still smouldering in our streets. The ashes are symbolic of decades and generations of pain, of anguish unheard,” he said.

“Generations of pain is manifesting itself in front of the world — and the world is watching.”

Canadians could be forgiven for thinking that the election of Barack Obama in 2007 was going to usher in a new period of racial peace in the U.S., Sands said — and for wondering now where it all went wrong.

“There was a feeling that maybe you’re in a new era, in a very positive way. And for a variety of reasons, that didn’t seem to coalesce,” he said.

“Now all of a sudden you’re like, ‘Well, wait a minute, what happened?’ So I think that that is also part of it, too. Maybe we should be grateful that Canadians often hope for the best in America. We do have a good side.”

This report by The Canadian Press was first published May 29, 2020.

Black Lives Matter: If They Can’t Breathe, None of Us Can